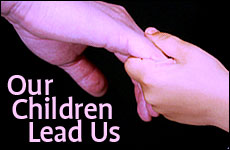 Israel's ancient, powerful weapon: our children who wrap themselves in sensitivity to the suffering of others.

One of our grandchildren attends a summer day camp for six- and seven-year-olds in Jerusalem.

A few days ago the group was scheduled to spend the entire morning at the beach. They waited expectantly for the bus, but before it arrived the rabbi of the school that was sponsoring the day camp called all the children together.

"All of you know," he said, "that there is a war going on, and many boys and girls of your age who live in cities like Haifa and Safed have had to leave their homes and go and live in other places to be safe.

"These children had to leave their toys and their books and their favorite games behind. I am thinking that maybe today we should do something special for them. What do you think we might be able to do?"

The children listened carefully and quietly. Finally, one youngster raised his hand.

"I think we shouldn't go to the beach today at all. I would feel bad having fun at the beach while they aren't having such a good time away from their homes. I think we should pray for them and say psalms for them, and then we can find something else to do."

The children agreed enthusiastically. It was unanimous.

So when the bus came it did not take them to the beach; instead it took them to the nearby synagogue, where they prayed and recited Psalms 83, 130, and 142 together. After that, instead of taking them swimming, the bus took them to a museum, where they had a fine time.

It was just a minor incident -- but maybe not so minor. Had they gone to the beach, these children would soon enough have forgotten about it. But they will not soon forget something much more important: their participation in the pain of others.

"Whosoever shares in the difficulties of the Jewish people will be deemed worthy of sharing their joy," say the Sages. Without being aware of this Talmudic dictum, and without being told that they had to do this, these youngsters instinctively felt a kinship with their peers in the North.

They lived a profound lesson in caring, one that transcends times of war and will help them grow into exemplary human beings and Jews.

How sensitive and wise was the rabbi who spoke to them. More so, how sensitive were these youngsters who saw immediately what their rabbi was driving at.

Here is the historic power of the Jewish people. Kol Yisroel arevim zeh lazeh: All Israel is responsible one for the other. We are never alone; we have our God above us, and we have the Jewish people beside us.

We are fighting an implacable enemy whose hatred of the Jews goes back millennia.

History teaches us that the love and humanity of the one will ultimately triumph over the brutishness and hatred of the other.

They are proud of one of their major weapons: their youngsters who strap bombs to themselves in order to maim and kill innocent civilians.

But Israel has a much more powerful major weapon, one that also goes back millennia: our children who wrap themselves in sensitivity to the suffering of others.

History teaches us that the love and humanity of the one will ultimately triumph over the brutishness and hatred of the other.

A remarkable sense of unity and purpose now pervades Israel. Many of us on the home front are saying special prayers daily for our soldiers in the battlefield, are increasing our giving of tzedaka, and trying to improve our behavior toward others.

All of these will surely help the cause of Israel in the eyes of the Almighty One. Israel's wars, after all is said and done, are fought not only on the ground, but on a higher dimension as well. It is of this higher dimension that Isaiah speaks when he prophecies of Israel's ultimate redemption: "...and a little child will lead them."

Our little children are leading us. May we be wise enough to follow their example in thought and in action, so we will be deemed worthy of sharing in the joys of the people Israel.

Thank You, Hero
Saadiah Gaon, Rashi and Maimonides: How Three Rabbis Revolutionized Judaism
King Sennacherib and the Siege of Lachish
Three Small and Easy Changes to Add Positivity in Your Home
Comments