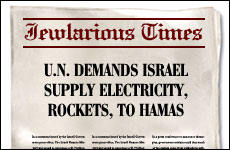 JEWLARIOUS SATIRE: After the town of Sderot faced an unprecedented number of Kassam missile attacks -- 200 in one week -- and Israel responded by cutting off supplies to Hamas terrorists in the Gaza Strip, their tactical reaction drew heavy criticism from the United Nations.

"To stop supplying Hamas terrorists with electricity and Kassam rockets is the most severe form of collective punishment."

Holmes added, "How can the cycle of Middle East violence end if Israel doesn't initiate faith building gestures like supplying rockets to a well-known terrorist entity that will be used to target innocent Israeli civilians?"

As Hamas turned its attention to destabilizing Egypt, sending thousands fleeing across the border between Egypt and Gaza, Jewlarious contacted Hamas's patrons in Tehran. Iran's Ambassador to the United Nations Dr. Javad Zarif, reached at the Qazanchi Terrorist Training Center located at the Ravansar-Kermanshah-Kamyaran tri-junction commented, "What the Israelis are doing is reprehensible. We have gone to great lengths to supply these rockets to Hamas and are deeply concerned that Israel is doing everything possible not to let them use them."

Zarif added, "Did I mention that we bought the rockets from Kim Jong-Il at 50% off the retail price? That guy has gone crazy -- crazy about good deals. I'm telling you -- he won't be undersold!"

Meanwhile, at the UN, Libya, as Head of the Security Council, tabled a resolution condemning Israel's reaction without mention of the Hamas attacks. The non-binding resolution, opposed by the United States, reads, "Hamas terrorists are super-nice guys who volunteer at orphanages and hug lepers. Israelis on the other hand are really really bad."

Israeli Ambassador to the United Nations, Dan Gilerman, responded by stating, "It's like the UN has an idiot farm and just harvests these people each week."

Flying High
For Every Individual, A Torah Scroll
Allegiance To The Monarch
Meet the Real You: Yom Kippur
Comments
MOST POPULAR IN Jewlarious
Our privacy policy
Aish.com Is Looking for Great Writers