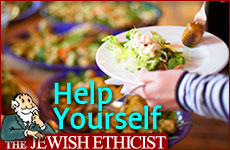 When in doubt, ask!

Q. Breakfast at my hotel is a buffet. Is it okay to take a little back to the room for a snack later in the day? After all, I paid for the food.

A. Most restaurants with buffets are very strict about taking any food out of the restaurant. Hotel dining rooms are a little different. While the official policy is almost always restrictive, in practice they are often willing to be lenient; they consider a small amount of food taken for consumption later to be part of the service. I think this is partly because restaurants are only making money from the food, so they can't afford to be lenient, whereas hotels are mostly profiting from the room. And partly it is because breakfast food is usually inexpensive and often perishable, so the hotel doesn't lose very much if you take a few rolls with butter to the room.

In a number of places the Talmud discusses if a person may "help himself" to someone else's property when it is likely that the person doesn't mind. The conclusion is that a person must ask permission, and that the permission must be freely granted, and not due to any kind of pressure or duress.

For instance, the Talmud tells the story of three sages, Ameimar, Mar Zutra, and Rav Ashi who visited a colleague, Mari bar Isak. When the visitors arrived the host was not present, so they were greeted by his tenant who served them some fruit. Rav Ashi refrained from eating from the fruit, because he was concerned that the tenant might not have permission from the householder. When the host Mari bar Isak arrived and saw what was happening, he asked the tenant, "Why didn't you bring even better produce to the rabbis?" Rav Ashi's colleagues assumed that he would consider this permission to eat, yet he still abstained! He explained that he was concerned that since the fruit had already been served, Mari bar Isak was embarrassed to show that he didn't give permission for the tenant to serve his colleagues; thus, the consent was not freely given. (1)

Here is another story: "A [hired] brewer betrothed [his fiancée] with a cask of beer. When the brewery owner came and saw him, he said, Why didn't you give her the best brew?" Seemingly this shows generous permission. Even so, the betrothal is considered doubtful; the concern is that the owner only agreed so as not to embarrass his employee, but that doesn't show that the brewer really had permission to take the beer for his own use in this way. (2)

In each case, the employee had good reason to assume that the owner would consent; yet in each case we find that "good reason to assume" is not really good enough. Furthermore, we see that in this case assent after the fact is not valid; there is a concern that the consent is granted only to avoid making a scene.

So even though many hotels are amenable to allowing some food to be taken to the rooms, we can't rely on this assumption. It is necessary to ask permission from some authorized employee. We also learn from both stories that not any employee is enough; after all, in each case it was an employee who appropriated the goods yet this is still not consent. Usually a server is not authorized to give this kind of permission; you would need to go to a manager like the captain or maitre d'.

Finally, we learn that we can't "shoot first and ask questions later". If you have already taken food and then ask if that's okay, the manager will want to avoid creating a scene with a customer, and is unlikely to object; in this case the permission is not freely given.

In all cases when we think permission is likely but not certain to be forthcoming, the correct course of action is to ask someone who has authority to give permission. Otherwise we can never be sure that we have a genuine right to help ourselves.

SOURCES: (1) Babylonian Talmud Bava Metzia 22a. Mar Zutra's colleagues were not concerned because they were certain that the tenant was serving his own fruits, not those of the host. (2) Babylonian Talmud Kiddushin 52b; Maimonides' Code, Ishut 5:8.

The Jewish Ethicist - Day Trader
The Blue Beyond
Great Place to Live
Is Eating Supposed To Be Spiritual?
Comments
MOST POPULAR IN Current Issues
Our privacy policy