Is Al Gore a Jewish Grandmother? 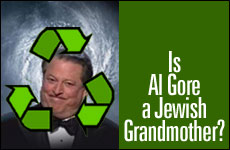 Saving our planet, one guilt trip at a time.

When I decided to finally "go green," I had no idea it would become pretty much a full-time job. I had hoped that my decades-long commitment to recycling would be enough to give me "green cred," but you know how it is: Eco-worry is more contagious than the common cold (for which you ought to use tissues made from recycled materials, even if it's a little scratchy). Eventually, I caved under the barrage of "green" stories in the media. Look, when trendy Barney's is featuring Rudolph the Recycling Reindeer and Wal-Mart is hawking corn-based hangers, what choice is there? Besides, when your last name literally means "green" in German, it's hard to ignore the trend.

When your last name literally means "green" in German, it's hard to ignore the trend.

Now biosustainability is my middle name -- much more memorable than "Lynn," don't you agree? It's not my style to take half-hearted measures with anything I commit to do, but I still didn't reckon that my conversion would take over my life.

So I'm running around like a maniac (or at least walking, which is eco-friendlier than driving) to recycle antiquated athletic shoes at a "reuse-a-shoe" program, elderly cell phones at Staples, and looking for someone to install a low-flow showerhead. I'm reading surveys on the best recycled toilet papers. It now takes me a long time to answer the wrenching question, "paper or plastic?" at the market since I now understand the environmentally charged implications of both. I nearly bought an end table made from bamboo, just because of its biosustainable properties, until I remembered that excess consumerism was bad for the environment, too.

Fatigued from the work of replacing every light bulb in the house with energy-saving fluorescent bulbs, I went online to test my knowledge of composting. Shockingly, I failed a quiz that posed the question, "What should you put in your compost bin?" Out of 10 questions, I only got three right! I had no idea that you could compost egg shells, as long as you broke them into small pieces, and I guessed wrongly that you could compost chicken bones, which are verboten.

I re-took the quiz until I was an unstumpable font of composting knowledge: old coffee grounds and filters, yes; newspapers, yes, glossy mags and old milk, no. However, I got confused when I read that a healthy compost pile, assiduously worked by unionized bacteria, worms, fungi, and insects, would convert all this refuse into something called "humus." This did not sound as appetizing as the chickpea paste that I always keep in my refrigerator and is called "hummus." I was humbled that becoming eco-friendly could expand my vocabulary. I am ordering my composting bin today. I am not ordering a composting toilet, a shocking thing that I had no idea existed and which I will not explain, given that this is a family-friendly publication.

I found a web site with politically correct clothing, too, changing the world one biopolymer fabric at a time. They use only organic cotton, wool from organic New Zealand sheep, and recycled polyester. At first I imagined that this meant that the ski vests and jackets were reincarnated from 1970's leisure suits, but I was wrong: an organic customer service guy told me they were probably made from mountains of old plastic soda bottles and other "post-consumer industrial content."

It makes sense that this clothing company, named after a Maori tribe, only makes warm clothing, since the eco-friendly lifestyle means you have turned down your thermostat to the "Siberia in December" setting. And you can tell they are deadly serious about their mission: they offer a wool dress called the "regime dress," described online as the thing to wear when you want a cross between "a provocative librarian and a disciplinarian." I am not kidding. It is not advisable to request a "regime change," however, since it is the only dress they offer so far.

I want to help the environment, I really do. Remember, I've been recycling since before Al Gore invented the Internet. Yet I've discovered a toxic underside to this whole green movement. Not only do I have annoying pangs of jealousy at the neighbor down the block who installed solar panels on her roof, but everything I do makes me feel guilty: turning on a light switch, running a load of laundry (even full loads in cold water), turning the key in my non-hybrid car engine (sorry, but my family is too big for a Prius), even if I'm on my way to recycle old batteries. I feel guilty that I only have just begun to look for the "fair trade" label on my coffee, and guilty that I bought raspberries last winter, knowing that they were flown by air, wasting fossil fuel.

I considered doing penance by joining one of those urban foraging outings, where otherwise sane people look for edible castoffs on the streets, just like the homeless people do, just to prove how much waste there is in our society. However, I held back, probably because I had gotten a whopping headache from the overpowering smell of vinegar I was using to clean the house. No more Formula 409 for us!

I realize, of course, that social and environmental change must come slowly, and I am trying not to add to my guilt that the landscaping we put in last year requires the use of various mowers and trimmers, which emit greenhouse gas emissions. I also now realize that our lawn itself, so green and lovely to look at, is a buffer of anti-social no-mans-land, reinforcing the suburban alienation of our sprawling communities. I am sorry that I fell into a trap of this kind of puritanical homogeneity and mindless conformity. So much for my degree from Berkeley.

Fortunately, my Jewish heritage will give me some measure of peace. Because the next time my husband walks in the room and asks, "Don't you want me to turn on the light?" I'll just sigh and say, "No, it's all right, darling. I'll just sit in the dark."

The Hollywood Circle of Life
Scientific Curiosity and the Divine Encounter
Mind Over Milkshakes
Love the Convert
Comments
MOST POPULAR IN Jewlarious
Our privacy policy
Aish.com Is Looking for Great Writers