When the Few Activated the Many 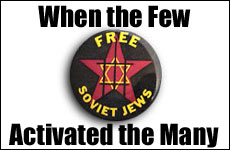 The words "Let My People Go" and cries for "Freedom for Soviet Jewry" are expressions that, for many of us, still set our hearts racing. But those battle cries are now as much the property of historians as entreaties to "Remember Pearl Harbor."

The reason is that, contrary to the expectations of a largely skeptical world, the Soviet Jewry movement won. With the fall of the Berlin Wall and the collapse of the Soviet empire, the Jews were free to go. And go they did, to both Israel and the United States.

The beginnings of the Soviet Jewry movement are rightly being celebrated this fall with a variety of commemorations. While somewhat arbitrary (after all, Elie Wiesel's seminal "Jews of Silence" about the subject was published in 1966), there is little doubt that Israel's Six-Day War triumph helped trigger an enormous revival of pride in Jewish identity among both Soviet and American Jews. The result was a new hunger for freedom on the part of the former and a burgeoning desire to aid them on the part of the latter.

Almost 20 years later, the eventual victory of this movement may be seen, by some, as merely an incidental result of the far larger Cold War contest, in which the forces of the democratic West prevailed over Soviet communism. But no history of that epic struggle that ignores the contribution of the Soviet Jewry movement and the human-rights activism inside that "Evil Empire" would be complete.

While the principal credit for the power of the movement belongs to heroic Soviet refuseniks who risked their lives to demand the right to emigrate to Israel, people in this country played crucial supporting roles.

Those activists, smuggling information in and out to the world about the plight of those who wished to leave, deserve the plaudits they have received.

American Jewry made its voice heard.

So, too, do the political activists who pushed to gain congressional passage of legislation, such as the historic Jackson-Vanick law, which linked the right of emigration to trade with the Soviets. On the streets and on the campuses, as well as in synagogues and community centers, many toiled to keep up the links with Jews behind the Iron Curtain and to keep the cause alive, even in the years when it seemed as if there was no hope of victory.

Motivated, in large part, by the memory of the failure of an earlier generation to act with similar urgency or to use their political clout in the face of the Holocaust, American Jewry made its voice heard. American politicians and even the jailers of the giant Soviet prison heard that voice, and the result was a vital contribution to the collapse of Soviet communism's legitimacy and, eventually, its grip on power.

As historian Henry Feingold writes in his recent book on the history of the movement, " ‘Silent No More': Saving the Jews of Russia, the American Jewish Effort, 1967-1988," quiet diplomacy, as had traditionally been practiced on behalf of captive Jewish communities, was never going to be enough when it came to Moscow.

His book ably fills a void in terms of scholarly attention devoted to this subject. The organizational conflicts, as well as the push to influence Washington, are analyzed in detail. But those looking for a sense of the drama of activism in that period will probably be disappointed.

Though he is more interested in policy than this aspect of the story, Feingold acknowledges in his book's "Afterthoughts" chapter that, without the "public relations" effort embodied in rallies and other activist work, "the movement would have come to nothing."

It was that visibility, argues the author, that made the right of emigration "a priority item on the Cold War agenda."

That said, it would still be a mistake to allow the commemorations of this movement to lull us into a reverie in which we romanticize the Soviet Jewry movement into mythical proportions. It would be well to remember a few key facts about it.

Despite the fact that nowadays it seems as if this movement embodied the desires of a united community, it was, in its infancy, a largely marginal endeavor for most of the era.

Much like the American civil-rights movement in which, in retrospect, it sometimes sounds as if millions of American Jews "marched for civil rights" -- when, in fact, few did -- it is more than likely that the overwhelming majority of American Jews probably never lifted a finger for the cause, let alone marched or worked for their captive brethren.

Throughout much of this period, especially the 1970s, it often seemed as if the movement was as much the creature of people on the outside of the Jewish consensus, such as the late extremist Rabbi Meir Kahane and his Jewish Defense League, as it was of the Jewish establishment.

Not All at the Barricades

Even more mainstream activists, such as those at the admirable Student Struggle for Soviet Jewry, had to embarrass Jewish leaders into backing them. Nor was the State of Israel -- which, perhaps understandably in a time of war, had other priorities at the time -- much help. The popular idea that everyone was at the barricades from 1967 until the gates opened is simply untrue. The participation of most Jews in the movement was more vicarious than anything else.

In his heyday as a New York rabble-rouser before going on to being the Knesset's resident anti-Arab demagogue, Kahane -- who was assassinated in 1990 -- voiced a key insight into the drama that was unfolding. It wasn't so much that American Jews were going to save Soviet Jewry, Kahane said at the time, but that Soviet Jews could actually save American Jewry.

It took a relatively small band of troublemakers to push a largely apathetic community.

And in the years that followed, it was the loud voices of Jews, who were finding their identities as Jews via this cause, that eventually won the day.

The conclusion that we can draw from an honest examination of Soviet Jewry activism is not one that should lead us to indiscriminately laud American Jewry and its institutions. Rather, the true moral is that it took a relatively small band of troublemakers to push a largely apathetic community to lend its name to the efforts of a few hard-headed activists who would not settle for business as usual on a life-and-death issue.

In 2007, with the Jews of this country apparently even less interested in the fate of Jews living elsewhere, or even in any sectarian cause, it is an apt time to retell the story of this movement. We should do this not so much to laud its veterans -- though they deserve much honor -- but to attempt to teach a new generation that it must find its voice, just as its predecessors did.

At a time of rising international anti-Semitism, coupled with a heightening siege of Israel, there's plenty of work to be done for those who wish to speak up. But, as in 1967, the key question is whether they will -- as did their predecessors -- choose again not to be silent.

Transforming the Pain of Tisha B’Av to Active Responsibility
Seeing Without Eyes
Why Shouldn’t We Eat Whatever We Want?
The Power Of Prayer
Comments
MOST POPULAR IN Israel
Our privacy policy
Aish.com Is Looking for Great Writers