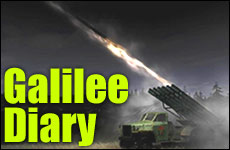 Shabbat in Israel along the Lebanese border

SDE ELIEZER, UPPER GALILEE -- Late Friday afternoon, Rabbi Amir Katz, the Rav of Moshav Sde Elizer was on his routine weekly circuit of our moshav, Sde Eliezer. As he does every Erev Shabbat, Rabbi Katz was checking the Eruv -- the Shabbat "fence" allowing the transport of items within its boundaries on Shabbat. He was making repairs and adjustments where needed, when suddenly a loud explosion lifted him off the ground.

A Hizbullah Katyusha rocket had landed, leaving a gaping hole in the ground where he had stood just two minutes before. In coming down, the rocket had cut a section of the Eruv which R. Katz had just repaired. Sde Eliezer's Rav calmly reached into his roll of wire and his tool kit and repaired the Eruv in the same spot again, rendering it fit. It was one of two rockets that hit Sde Eliezer, but fortunately no one was hurt either time.

The day before, Rabbi Katz was in Safed, where he heads a Yeshiva, when a Katyusha landed nearby, one of a large number hitting Safed in the last couple of days. He ran over to render aid to a man lying on the ground who was severely hurt. Some 40 rockets of the 750 Hizbullah has sent into the Galilee have hit Safed, causing many injuries and severe damage. With more than 500 injured in the Galilee these past few days, some quite seriously, the emergency rooms at the hospitals in the Galilee are full, with people suffering minor injuries and those not in critical condition being asked to leave as the more gravely injured are brought in.

Rav Katz's experiences are in no way routine, but they do bring home what the Galilee is going through now. Along with the Katyushas flying overhead from Lebanon and reaching places as close to the border as our farm on the moshav -- 6,000 yards or so from Lebanon -- and as distant from the border as Haifa, where at least nine were killed 20 minutes ago by a barrage of rockets, there is the incessant boom-boom-boom of our artillery perched on the hills before us and directed towards Hizbullah rocket positions in Lebanon. To that end our planes streak overhead, including high-flying Apache helicopters armed with missiles which seek the tell-tale flashes of Hizbullah-fired missiles and hone in on them. They also relay the coordinates to Israel's artillery, which join in seeking to hit the rocket launchers.

As of Saturday night, the Israel Air Force, which has carried out thousands of sorties over Lebanon these last few days, had destroyed about 60 percent of Hizbullah's long-range missile capabilities, hitting 100 rocket launching platforms as well as 11 mobile Katyusha rocket launchers platforms. However the damage to Hisbullah's military infrastructure is not yet that great. And they still have an estimated 12,000 missiles.

Dark smoke rises over the hills facing Lebanon, leaving an opaque grayish black sky in places. The sounds of the explosions of the artillery shells and missiles targeting the Lebanese rocket batteries, and the frequent booms which continue incessantly day and night, at times only five or six seconds apart, tend to assure that sleep is not easy.

Martial law has been declared throughout the north. An estimated one million people have been directed by the army to remain at home and not go to work. Those living in our area in close proximity to Lebanon have been ordered to remain in bomb shelters and in relatively secured, or interior rooms. We sleep in our small concrete-fortified security room, which is also available to Yochanan and Naomi, a couple living on our farm with us with their infant daughter, and to the Katz family of ten down the road, whose home lacks a secure room. But it's difficult to remain confined in a shelter or a small room for long hours on end -- children especially -- the repeated instructions of the military notwithstanding, so many are just not doing so. But few wander out of their homes.

All businesses, factories offices, banks, post offices and shops have been ordered to remain closed. A supermarket in the small shopping mall in the closest town, Hatsor, opened for a couple of hours Friday morning to allow residents to replenish their food stocks, so we took the window of opportunity to do our Shabbat shopping and stocked up on staples. The summer tourist business has been ruined, the vacationers in the hotels and the cottage rooms rented out by farmers to city dwellers who seek to escape the city heat in the Galilean hills, now back in their city homes.

Are people leaving? Decidedly so. Streets are similar to those on Yom Kippur in Jerusalem, with hardly any cars about. And they are eerily empty of people. There were but a paltry few in shul in Sde Eliezer on Shabbat, most having left for safer climes. At the Chabad shul serving our much larger, 500-family neighboring moshav, Yesod HaMaala and the 100 families in Kibbutz Hulata -- in both of which rockets fell -- they could not gather ten for a minyan on Shabbat.

This morning when Yochanan and I arrived at Yeshod HaMaala for Shacharit, only two others showed up. Nearby Kiryat Shmona is a ghost town, the large majority of residents having fled. The roads are filled with cars heading south to Tel Aviv and elsewhere. Some of those who lack friends or relatives who would take them in, head for Eilat. Despite its extreme heat this time of year, the evacuees opt for the heat in Eilat over that in the Galilee. Israeli Army Radio is doing what it can to help evacuate residents of the Galilee, repeatedly calling for families in the south and center of the country to take in Galileans.

Is leaving a good bet? Ask the Benzaken family. They left Hatsor on Friday to get away from the rockets, and moved in with relatives in Tel Aviv. On Shabbat, their home in Hatsor was demolished when a Katyusha rocket scored a direct hit. A rocket fell in Meron on Shabbat, killing a woman and her 7-year-old grandson. In the morning, a Katyusha landed on a synagogue in Carmiel -- but Musaf was completed ten minutes before, and no one was present when the rocket landed.

There was a lull from the rocket firing and shelling a few minutes ago, but no one ventured about. The booms have now resumed with increased vigor.

Will it end soon? Possibly. International pressure, most significantly from the U.S., fearful that the weak Lebanese government will fall, may force us to halt the campaign before our goal of pushing the Hizbullah back and replacing the terrorists with a strong Lebanese army force on the border is complete.

In the long run? No respite on the horizon.

His Hands upon Us

From Jordan to Jerusalem

My Israeli Election Experience
Near Death Experience Panel
The Western Wall: The Heart of the World
Ask the Right Question: Tisha B’Av
Comments
MOST POPULAR IN Israel
Our privacy policy
Aish.com Is Looking for Great Writers