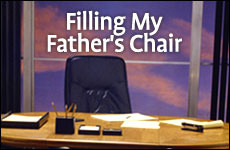 It seemed unthinkable that my father's chair could ever be filled by anyone else. But Someday came sooner than we expected.

The chair itself was not imposing. Rather, its occupant filled the space with his presence. For 20 years, my father sat in his chair behind a large wood conference table which served as his desk, and presided over the company he founded. His decisions were made with an air of authority that did not leave room for question. His employees found him to be exacting, strict, yet kind when warranted. He seemed always in control and his ‘respectful suggestions' were clearly understood as implicit commands.

When I started to work for him, I fell easily into a role of both assistant and daughter. He spoke to me in a way more casual than other employees, and over time it was clear he was grooming me to take over the financial operations of the company someday. While I was an avid student, it seemed that my role of assistant would go on forever, so if I didn't absorb the lessons one day, I would always be able to review them the next. My father filled his chair with such power and expertise, that it seemed unthinkable that his chair could ever be filled by anyone else.

But Someday came sooner than we expected. For more than a year during his illness, my father was there as my resource -- any questions I had about operations were answered as I sat at his bedside each afternoon and reviewed the days events. Phone calls from the office in the morning took care of my numerous questions about accounting details. Even three days before his death he managed with difficulty to sign a tax return that had to be sent in, making it seem that he would always be there.

I made no major decision without him, and kept a ‘cheat sheet' on my desk of all his instructions, from how to enter something into the accounting software to what number to use when calling a supplier.

Sitting in the chair for the first time seemed quite strange. The view from the other side of the desk seemed skewed. Even though I had been "in charge" for many months, I never felt that I was really making the final decisions. I was just carrying out orders and following directions given by the real boss. Now the decisions were all mine.

All the tasks that seemed to have been so effortless to its former occupant now weighed me down. The glory that I had always associated with sitting in the boss's chair was chained to the equally unglorified minutiae -- meeting payroll was my headache now. All the things that I had thought so humorous in his manner were suddenly clear to me when I "respectfully suggested" something to one of my employees.

In Judaism there is a saying in Ethics of the Fathers, "Do not judge a person until you have sat in his place." Sitting in my father's chair I found that I frequently felt as though somehow his thoughts were being transmitted to me when I would consider how to deal with various situations. I suddenly understood why he did things the way he did, and often even the words I used in speaking to a staff member seemed to be his, and not mine. While I found myself comforted in some way, feeling I was doing what he would have done in the same situation, the burden of owning the rights to the chair sometimes seemed overwhelming.

It's almost three years now that I have been heading the company. The chair and the desk are still the same, but I have changed. It still seems strange to sign my title on official company documents and there are times when I still think I am playing ‘dress up' and just role-playing. But I think my father would be proud of me.

He worked hard to make his company something of longstanding worth and value to its customers, and I hope that sitting in his chair has made me sensitive to his dreams and goals. I don't think I will ever fill the chair the same way he did, but the chair is mine now, and seems to have molded to my shape and personality, much the way it did to his.

Susan Schwartz is president of the Davka Corporation. She holds a masters degree in Social Work, and is a daughter, wife, mother and grandmother.

The Jewish Ethicist: Evaluating the Teacher
Why Are The Prayers Of Yom Kipur So Repetetive?
Ha'azinu 5783: A Time for Unity!
Twisted Thinking
Comments