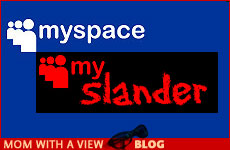 Today's perpetrator could be tomorrow's victim.

It's a new challenge to the First Amendment, at least in the secular world. The Jewish world has mounted this attack for a few thousand years. It's not about censorship or even morality in its broadest terms. But it is about freedom of speech.

It's about the freedom to say whatever's on your mind at any time about anyone else. And it's about good old-fashioned human decency. It's about sensitivity. And kindness.

The web is the greatest opportunity for the dissemination of information that has ever existed for mankind. It offers the broadest range of communication. It is also the place where gossip reigns most freely. Never before in history could lives destroyed with the mere click of a button -- with words. Never before could malicious slander be spread so widely and so easily. Teenagers are forced to switch schools because of cruel remarks posted on MySpace.

And in the latest twist, women at Yale Law School are hampered in their job searches and personal lives because of unpleasant postings on AutoAdmit. (which goes to show you that there is no connection between brains and character -- but that's for another time).

What's particularly appalling about these latest outrages is, to quote Elizabeth Wurtzel, author of the piece Trash Talk (Wall Street Journal, 03/19/2007) that most of the comments are "mean-spirited."

This isn't two sides of the debate over a worthy yet controversial cause. This is purely personal. It's vindictive. It's one-upmanship. It makes the writer feel better about him/herself. All the traditional reasons for gossip apply.

The only thing that isn't traditional is the method, and therefore, the far-reaching consequences. Someone called me recently because they'd heard some slander about a third party. I was able to easily disprove the story and the caller was able to reassure the initial concerned individuals, thereby preventing any further spread of this rumor.

This is, unfortunately, not true for what goes up on the Internet. It is much more difficult to get something removed once it is online. And even if you are successful in this first step, how can you possibly do damage control? There could have been hundreds, thousands, even millions of viewers.

We live in fear of a madman being able to set off a nuclear bomb with the push of a button. Are we any less mad to press the send key that can also destroy lives?

Who will stop us? Only a strong sense of compassion and the recognition that the Almighty is always watching our behavior can keep our itchy fingers still. And perhaps the realization that today's perpetrator could be tomorrow's victim.

Trump and Other Topics I Refuse to Talk About

It’s Not about Lance Armstrong

A Series of Fortuitous Events

My Day of Silence
Should I Break Up, Get Engaged or Keep Dating?
Time Is Your Precious Commodity
A Constant World in Flux
Comments
MOST POPULAR IN Family
Our privacy policy