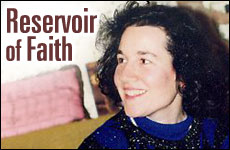 The cancer could not stop her from caring for and inspiring others.

Even if a sword is poised at one's throat, one must always remain hopeful and pray to God for salvation. This idea of the Sages was often quoted by my friend Elisheva Chana.

I first met Elisheva Chana in 1977. We were part of a group of 15 young women who took on the challenge of learning in a new yeshiva in Jerusalem. (It was a resounding success and has blossomed in the ensuing years.)

I remember meeting Elisheva Chana, then known as Beth, and I was drawn to her smile and soft voice. A photo from those days shows the two of us smiling. Elisheva Chana is holding a bottle of milk and I am holding up a roll. We called it Torah V'Ochel, "Torah and food" (a take-off on Yeshiva University's motto of Torah U'Mada, Torah and science/knowledge).

It was a year of Torah learning, a year of fostering new friendships, a year of encounters with diverse educators and personalities, a year of becoming more attached to the land, and a year of relative innocence.

In the ensuing years Elisheva Chana and I led our separate lives. Elisheva Chana spent long durations in New York. I made aliyah in 1981 and married in 1984. Every handful of years I would reconnect with Elisheva Chana when she was back in Israel.

Fast-forward to about two-and-a-half years ago. A close friend mentioned that she had recently seen Elisheva Chana, who told her, "Please tell Adina that I'm not well." I called her immediately and was stunned and greatly upset to hear that the big C (or CA in medical terminology) had entered her life.

A few years prior to this, another friend had confided to me of her own battle with cancer. She had not told me before because she didn't want me to worry. I called her frequently, but within a short amount of time she was hospitalized, put on a respirator, and soon passed away. Like Elisheva Chana, she was single.

I made a promise to myself that I would help out Elisheva Chana in any way I could. I raised money for her care, I called her, I visited her, and I davened (prayed). Oh, how I davened! The motto might be "Family First," but Elisheva Chana was on my mind more frequently than family.

A visit to Elisheva Chana, whether in the hospital or in her apartment, was always a spiritual encounter. Despite her terrible, terrible suffering, the welfare of others was high on her priority list. She would often ask me to pray for other people: this one needs better health, this one needs a marriage partner. (Several of her single friends have since become brides.)

She was so ill, but she just about always maintained her sense of humor and her optimism. She never complained. She always said this is what God wants.

She would do anything to help another person.

Despite her tremendous need for rest, she was often on the phone with friends and other people who needed her insight, her empathy and her love. She took care of sick people. She would do anything to help another person.

She was both a highly intelligent and down-to-earth woman. She loved organic food and the sound of the ocean. One of her friends recalls: "When I was in Florida, I would hold the phone up at the beach so she could hear the ocean waves."

She made friends wherever she went. She was always friendly, never judgmental, and always saw the good in everyone. You never heard a bad word from her.

She never married and raised a family, but if those to whom one teaches Torah are considered like one's own children, Elisheva Chana had an abundance of children.

Elisheva Chana only wanted positive energy around her. She did not want to discuss death and dying. She wanted to live. Denial is one of the stages before acceptance of death. I debated if Elisheva Chana was in this stage. While speaking to a friend, a social worker, she said that being positive is a wonderful way to try to maintain or reach good health. The late Dr. Kubler-Ross would probably have stated that Elisheva Chana was in the denial stage, but for Elisheva Chana it was more like a gargantuan reservoir of faith that God would heal her.

One woman described Elisheva Chana as "one of the most positive women I've ever known, and what she lacked in physical strength she more than made up for in inner strength."

On one occasion, Elisheva Chana listened to this song:

Heal my heart
Heal my soul
For in Your arms I am whole...
Guide my steps one at a time
And let Your breath inspire my life...

As Elisheva Chana listened intently, tears streamed down her face. It seemed like the song had been written by her and for her. A few weeks later, the songwriter, Devora Gila, came to visit Elisheva Chana. She says: "I went expecting my role to be that of the uplifter, and in the end Elisheva Chana inspired me with her deep emunah (faith). I thought that I would bring peace to her, but she was at peace with her situation and where she was."

During one of my visits, I observed her weakness and weight loss, and I could not imagine that she would leave the hospital alive. Well, God has a different imagination and she was discharged. She lived well beyond the maximum time that the mortal doctors gave her. During shiva, her brother Ben told me that during one hospitalization, the doctor told the family that she only had a few hours to live.

Even at the lowest point, she maintained a positive air of hope.

What allowed Elisheva Chana to live for so long? Was it the macrobiotic diet? Was it the hope that she felt? Was it the good deeds that so many people performed in her merit? Was it her own enormous merits? Was it the countless prayers and tears?

Elisheva Chana just about always maintained a positive air of hope. At times she made me very hopeful that the prayed-for miracle would occur. I felt that God would remove that sharp sword from her neck.

But it was not to be. Elisheva Chana, who was so connected to the beauty of nature, was laid to rest in Har Hamenuchot in Jerusalem. Tree-studded mountains surround the area on which she rests.

Elisheva Chana gave so much strength and hope to so many people. On the 24th of Iyar, we remember the yahrtzeit of Elisheva Chana bat Avraham. May her memory be for a blessing.

I Want My Death to be a Jewish One