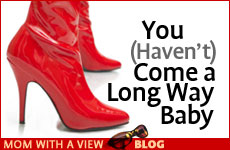 There is a new feminist battle to be fought.

The real feminist battle today is occurring at the local mall on Saturday night. And, if my experience this past week is any guide, the fight has been lost.

While there may be more educational opportunities than ever before, more career advancement, and more lawsuits for harassment, too many young women today seem to have missed the most crucial chance of all: The opportunity to assert her femininity in proud and dignified manner.

After some initial missteps the early feminists realized that their main goal was societal recognition of the values that are predominantly feminine, like the ability to nurture, the desire to build a safe and values-laden home.

A central aspect of the feminist dream was that women be seen for their character and intelligence, and not in the potentially base light of their physicality. That women should look attractive, but not provocative. That dressing in a revealing way obscures the ability to see the person underneath.

This message seems to have gone awry, or just lost.

Instead of a celebration of femininity, we see an elevation of promiscuity. And, perhaps in the most ironic and painful twist of all, many of these girls don't even seem to realize it. They seem to be completely oblivious to the statement they are making with their clothing (or lack thereof).

The evolved, actualized women using their talents and skills to make a difference in the world may be out there, but they're hard to find beneath the camisoles and miniskirts.

And yet, this lack of consciousness is perhaps the biggest failure of all. How could these young women be unaware of the impression they're creating? Of the way in which they are diminishing themselves and their true ness and strengths? I think it's unconscious because the alternative is too unbearable to contemplate.

To most of the adult world, Paris Hilton and Britney Spears are caricatures, figures of pity. But to many teenagers, they are role models.

Young Jewish girls are taught that the "beauty of the daughter of the King" is an inner beauty, a beauty not on public display, a beauty that serves her family and community in a private and dignified manner. A beauty of the soul.

When the emphasis is on the external, we are too distracted to consider the internal and the inner self suffers from lack of attention.

There is a new feminist battle to be fought. It's a small quiet campaign that should be mounted in every home, every school and every synagogue. A campaign that helps our daughters recognize all the valuable gifts they have to contribute, all the wonderful character traits with which they shape themselves and their world; a campaign that teaches the greater preciousness and pleasure of keeping the physical side under wraps and more subdued.

Women can change the world. They can reintroduce the values of femininity and dignity and a sense of inner centering in a world that has become almost exclusively external. Women can teach men about how they would like to be valued, how they should be valued.

Last Saturday night at the mall, the young women I saw were definitely making a statement about how they want to be treated and valued. Hopefully with some real "feminism," they'll be motivated to teach an alternative position: The dignity of the Jewish woman. Now that's true empowerment.

Concentrate On the Driving

It’s Not Business as Usual

Leave It to Mrs. Cleaver
In the Shadow of David and Goliath
Where Do the Laws of Nature Come From?
Saadiah Gaon, Rashi and Maimonides: How Three Rabbis Revolutionized Judaism
Comments