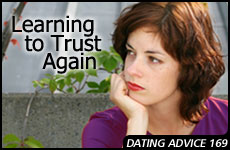 After an abusive marriage, how can she hope to find a 'good man'?

I am recently divorced from an abusive man. We were married for less than two years and have no children. The abuse started from the first week we were married and got progressively worse. It became physical at the very end and I filed for divorce immediately. This has left me feeling quite depressed, as I obviously had feelings for him and wanted to have beautiful home and family.

I decided when I left him that I would take a minimum of six months off before dating anyone new. So what advice can you give me about dating a potential spouse in the future? I am afraid to date guys who were divorced because my perception is that men are frequently the cause of divorce. I am also wary of single guys who have no experience with marriage.

What should I do?

We can understand that you are wary of divorced men, but we believe that because of your terrible experience during your brief marriage you are misjudging a large population of wonderful men who may be eminently appropriate for you. As a family lawyer who spent more than 20 years helping clients end their marriages in as humane a way as possible, and as a therapist who has observed a number of troubled marriages, we do not agree that men are more at fault in the break-up of a marriage.

There are many reasons why marriages end after a short time. They include one or both parties lacking the interpersonal skills or being too immature for marriage; unrealistic expectations about married life that could not be reconciled with the realities of marriage; a spouse who has never individuated from his or her parents; not understanding that the difficult transition from singlehood to marriage is normal and that in time they will adjust; a couple who is infatuated with each other and only learns after marriage that they have little in common; or in-laws who interfere with and destroy the marriage.

Some couples marry before each of them knows the direction they want their lives to take, and later discover that their goals and values are too dissimilar; some people marry with the unrealistic belief they can change what they don't like about their spouse and later decide that it's something they can't live with; other couples don't focus on maintaining their emotional connection and grow apart. There is no single person "at fault" in any of these circumstances.

We have seen many people who have had brief first marriages learn what went wrong, and then mature and/or work on improving themselves, and go on to have successful second marriages.

Unfortunately, some marriages end because of physical abuse. But this is the minority of cases, and the majority of divorced men are fine people. Until you are able to understand this, and get over your distrust of most men, you are not ready to return to the dating scene.

In addition, a six-month break from dating appears too short a time to deal with the trauma of the abuse you experienced, and learn how to trust men. We hope that you will work with a therapist as you continue to heal.

When you are ready to begin dating, you will need to be more open-minded in your approach. We suggest that you focus on the positive qualities you want in a marriage partner, rather than on the qualities you do not want your future husband to possess. You can do this by writing down the most important qualities you are looking for, and narrowing down that list to four -- e.g. your desire to meet someone who has a realistic view of marital responsibility, and who will treat his wife with kindness and consideration.

It is possible to learn if someone you are dating has these qualities. You do this by guiding your conversations to topics of the home-life you hope to have someday, the responsibilities each of you foresees having when you are married, and your expectations of how family members will treat each other.

You can look for someone who wants his wife to be his partner in life, who respects and has a high regard for women, who expects to share responsibilities with his wife, whose father treated his mother well, and who feels that his parents' own good marriage is something he would like to emulate. You can also observe how your date acts toward his own family members, friends, and the people who perform services in the community, such as a waiter, taxi driver or store clerk.

Surely there are divorced men, as well as never-married men, who possess these character traits.

Each of us has worked with clients who endured a great deal of emotional and physical pain because of abuse, but went on to have good marriages and happy lives. We hope you will soon be ready to start dating, and will find a man with whom you will build a healthy, loving marriage.

Dating Advice #88 - Does Love Conquer All?

Dating maze #264 - Ready to Give Up
Why Are The Prayers Of Yom Kipur So Repetetive?
Ha'azinu 5783: A Time for Unity!
Twisted Thinking
Comments