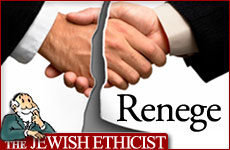 Can I go back on my original agreement?

Q. I agreed to use a certain service provider and even signed an agreement, but the agreement is not valid until I obtain some authorizations from the authorities, so I am technically able to withdraw. In the meantime I came across a better deal. Can I renege on the original agreement?

A. Jewish law, based on commandment and personal commitment, includes many obligations that are not enforceable. This is true even in business regulation. So even when an agreement is not enforceable, there may be an obligation to uphold it.

The extent of this obligation is discussed in the following Talmudic passage:

The Talmud goes on to explain that the basis of their disagreement is the explanation of a Biblical verse. The Torah commands us to give a "righteous hin and a righteous eifah" (Leviticus 19:36) -- that is, to give full measure to the customer in both liquid and dry measures. But the word hin also means "yes"; the implication is that a person's ?"yes" must be sincere. One view is that sincerity extends to keeping your word even when you have reconsidered; the other is that it only forbids dealing in bad faith, when there is no intention to keep the agreement even at the time it is made. (1)

In practical terms, the real question is how large a change in circumstances is required to justify reneging. All agree that simple caprice is not a good enough reason to renege, even if the original agreement was in good faith; all would agree that a drastic change in circumstances can justify breaking a non-binding agreement. (Discussing which agreements are binding is far beyond the scope of this article; in our case the reader specified that the agreement is not binding.)

An additional consideration mentioned in the continuation of the Talmudic passage is that of reliance. The Talmud concludes that a person tends to rely on the promise of a small gift, but not on the promise of a large gift. Thus, a promise to make a small gift is binding. If the service provider incurred significant costs as a result of reasonable reliance on your agreement (for example, he assigned a worker to spend a substantial amount of time preparing your file) you should take this into account.

Jewish law, as well as common business sense, tell us that the technicalities of enforceability are not the only criterion for keeping agreements; our reputation for being honest and trustworthy, as an individual and as a people, are likewise important. At the same time, there are good reasons that law, Jewish as well as secular, acknowledges that some agreements are not binding. A person should never take his word lightly, and should always strive to uphold it. In cases where there is a significant change of circumstances before a commitment becomes binding, or in cases where little burden is placed on the other side, there is much less of an ethical problem in reneging on a non-binding agreement.

Treating Aids in Africa
The Promise Of The Land
Which Chat Are You On?: Parshas Behar/Lag Ba’Omer
Do You Like Slow-Cooked Food? Thank the Jews
Comments
MOST POPULAR IN Current Issues
Our privacy policy