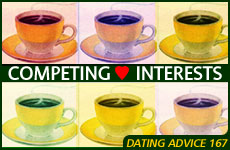 They agreed not to be involved with members of the opposite gender. But he's not living up to his end of the bargain.

I have been dating a very nice guy for the past three months. Early on we agreed to be exclusive. I believed this meant it was not okay to go out alone with members of the opposite gender. Apparently he believed this meant not to be involved romantically with anyone else. However, I recently found out he has been taking out long time "platonic" girlfriends to dinner, racquetball, etc. I am hurt and confused because I have honored my commitment not to spend time with other men.

He is not sure yet what he wants from the relationship and says he would like to get to know me better. He has also agreed to discuss where he wants the relationship to go in another three months. In other regards he treats me very well.

I am also concerned because he is in the entertainment industry and regularly keeps up with many friends, male and female. I am worried that I will never be the priority in his life and will have to accept being one of his many competing interests. Incidentally, this is why his last courtship ended.

Should I even give him another chance, or should I look elsewhere for someone who will value me like I want to be valued? Or do I simply need to give him more time?

It seems to us that there's more that distinguishes you and this man than an interpretation of the word "exclusive." The two of you appear to have very different goals for your courtship.

It seems to us that you are looking to get to know someone better to see if it will lead to marriage. If he shared this goal, we could understand him wanting to date for a longer period of time in order to get a better sense of whether the two of you are really moving in that direction.

However, perhaps he isn't really sure if he is ready to settle down. He seems to think that the "right" woman will inspire him to do so. From what we have seen with countless people, this almost never happens. The desire to find a partner in life has to come from within, not without. He has to first decide that he'd like to build a life with someone, and then look for the "right" woman, not the other way around.

We suspect that if you give this man another three months to figure out what he wants, you'll end up getting hurt because he won't be any closer to knowing what he wants at the end of that time. We'd rather you express to him that while it is too soon in your courtship for either of you to know if you are right for each other, it is a good idea for him to take some time now to decide if he is ready to find a partner with whom he can build a life and a family.

If he tells you that he has reached that point in his life, and each of you feel that the other one has the potential to be the "right' person, we suggest you talk about some specifics of how you will continue to date while you see how things develop. In other words, talk about how you can strike a balance between the time and energy you devote to each other and your individual interests and friendships. From our perspective, there's a big problem if someone has such a busy social life that one's date feels as if she is only one of many "competing interests."

Further, if he really is dating because he wants to find the right person to marry, he has to be prepared to devote a lot of emotional energy to developing your relationship. So we recommend that you add "purpose" to most of your dates. At the same time that you enjoy each other's company, you can use the date as an opportunity to learn a little bit more about how the other person thinks, and reacts to certain situations. You can explore what each of you wants out of life and expectations about marriage, career, pursing a dream, and having and raising children. You can do this by bringing up certain topics of discussion, seeing each other in different settings and with different people, and engaging in some interactive activities. This is the way two people who think that they might be right for each other can learn more about what really makes each other "tick."

If the man you are dating is not prepared to think about his goals, or if he concludes that he's not ready to see if things could lead to marriage, then we recommend you move on and look for someone who is dating with marriage in mind.