A Manifesto for Murder 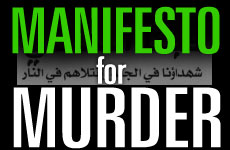 The Hamas charter reveals their Nazi-like genocidal orientation to Jews in general.

Much has been said about the Hamas charter's call for the destruction of Israel and the need for Hamas to renounce this goal as the condition for being granted international legitimacy, economic aid and diplomatic recognition.

But an examination of the charter (available at http://www.palestinecenter.org/cpap/documents/charter.html) reveals that Hamas, also known as the Islamic Resistance Movement, is not just dedicated (however wrongly or murderously) to the destruction of Israel. It shows Hamas to be governed by a Nazi-like genocidal orientation to Jews in general.

It would be no surprise if a self-styled Palestinian liberation movement depicted Israel in unflattering or even (if we indulge the movement some license to exaggerate) venomous terms. Yet Hamas' 9,000-word charter of 1988 -- repeatedly reconfirmed by its leaders -- pits Jews, Israelis and Zionists (used pretty much interchangeably in the charter) in Manichaean conflict, not just with Palestinians, but with Islam, which to Hamas is synonymous with all goodness.

"Israel, by virtue of its being Jewish and of having a Jewish population, defies Islam and the Muslims," Article 28 of the charter says. This otherwise stunning statement is not surprising, given that Hamas describes Jews and Israel as a cosmic evil. Almost mimicking Nazi textbooks, Hamas contends that Zionism does "not hesitate to take any road, or to pursue all despicable and repulsive means to fulfill its desires." And what are those desires? "To demolish societies, to destroy values, to wreck answerableness, to totter virtues and to wipe out Islam. It stands behind the diffusion of drugs and toxics of all kinds in order to facilitate its control and expansion." (Article 28)

Hamas sees Jews as extremely malevolent and also extremely powerful, capable of achieving their desires. In a hallucinatory anti-Semitic passage recalling the most extreme Nazi ideologues, the charter asserts that the Jews amassed wealth that permitted them to "take over control of the world media such as news agencies, the press, publication houses, broadcasting and the like. [They also used this] wealth to stir revolutions in various parts of the globe in order to fulfill their interests and pick the fruits. They stood behind the French and the Communist Revolutions and behind most of the revolutions we hear about here and there." (Article 22)

Pursuing this hallucinatory reverie (among the clandestine organizations the Jews allegedly use to take over the world, "Rotary Clubs" are highlighted), Hamas' charter then describes Jewish power and malevolence as still more sinister: The Jews "used the money to take over control of the Imperialist states and made them colonize many countries in order to exploit the wealth of those countries and spread their corruption therein.... They stood behind World War I, so as to wipe out the Islamic Caliphate .... They obtained the Balfour Declaration and established the League of Nations in order to rule the world by means of that organization. They also stood behind World War II, where they collected immense benefits from trading with war materials and prepared for the establishment of their state."

As if this wild, anti-Semitic litany, which includes Jews establishing the United Nations as part of their plan for world domination, is insufficient, Hamas declares that "there was no war that broke out anywhere without their fingerprints on it." (Article 22)

With how much power will the Jews be satisfied? According to Hamas, "Zionist scheming has no end, and after Palestine they will covet expansion from the Nile to the Euphrates. Only when they have completed digesting the area on which they will have laid their hand, they will look forward to more expansion, etc. Their scheme has been laid out in the Protocols of the Elders of Zion." (Article 32)

Hamas is determined to rouse the Islamic world to act in the only manner adequate to the danger. Negotiation, compromise, any permanent modus vivendi with Israel and Jews is not thinkable. Jihad and destruction is.

Faced with this demonic enemy, Hamas is determined to rouse the Islamic world to act in the only manner adequate to the danger. Negotiation, compromise, any permanent modus vivendi with Israel and Jews (Jews' very existence in Israel is deemed an affront against Islam), is not thinkable. Jihad and destruction is. Proclaiming every inch of Palestine, including all of Israel, to be Palestinian and Islamic, and in accord with its demonic view of Jews, the charter declares, "[Peace] initiatives, the so-called peaceful solutions, and the international conferences to resolve the Palestinian problem, are all contrary to the beliefs of the Islamic Resistance Movement."

Why? Because "renouncing any part of Palestine means renouncing part of the religion; the nationalism of the Islamic Resistance Movement is part of its faith, the movement educates its members to adhere to its principles and to raise the banner of Allah over their homeland as they fight their Jihad." (Article 13)

So what is left for Hamas and all Muslims to do? Despite Hamas' pro-forma statement that "humane" Hamas will tolerate Jews and Christians only under the impossible condition that they live under Islamic fundamentalist domination (Article 31), the genocidal logic of Hamas' foundational document is explicit: "Hamas has been looking forward to [implementing] Allah's promise whatever time it might take. The prophet, prayer and peace be upon him, said: The time will not come until Muslims will fight the Jews (and kill them); until the Jews hide behind rocks and trees, which will cry: O Muslim! there is a Jew hiding behind me, come on and kill him! This will not apply to the Gharqad, which is a Jewish tree." (Article 7)

This is no selective reading of Hamas' charter, as the extensive quotations indicate. The charter's almost classically Nazi accounts of Jews and its annihilative reveries form the core of Hamas' uncompromising and divinely ordained canonical version of the Declaration of Independence.

As a lifelong student of Nazism and its radical murderousness, I have always been extremely reluctant to use the epithet "Nazi" for other reprehensible, anti-Semitic or genocidal movements. Whatever the other differences, the anti-Semitism and the murderous logic that form the principal content and rhetorical structure and substructure of this charter and this political party are unmistakably Nazi-like with regard to Jews.

The last 100 years have shown that those expressing murderous dreams, like Hitler, mean it.

Imagine if a territory or country next to the United States, Germany, France or Britain were governed by a political party that had repeatedly terrorized and murdered citizens of its neighbor, and had issued a governing charter about Americans, Germans, French or Britons that described the people of that country as Hamas describes Jews -- calling not only for that country's destruction but also for the mass murder of its people.

Would people in that country accept the threatening political party as a fit partner in peace? Would people say that a political party harboring such profoundly irrational beliefs, fomenting such uncompromising hatred and speaking the language of mass murder should receive international aid that could only further its hold on power and facilitate its murderous intentions?

Hamas' charter should not be dismissed as just words, and all that it contains would not be nullified even if Hamas, under pressure, renounced its goal to destroy Israel. (So far, Hamas has adamantly defended its genocidal charter.)

Seldom in the modern world has a political party enshrined such hallucinatory hatred and overt murderousness against another people in its constitution, and more seldom still has such a party taken power. The Nazi Party Program of 1920 also contained much anti-Semitism, but compared to Hamas' charter, its demonology and prescriptions were tame. Given the extreme political costs of such speech, governments, political parties and political leaders rarely speak the language of annihilation openly. So when they do, we should take them at their word. The last 100 years have shown that those expressing murderous dreams, like Hitler, mean it.

Daniel Jonah Goldhagen, a member of Harvard's Center for European Studies, is the author of "Hitler's Willing Executioners: Ordinary Germans and the Holocaust."