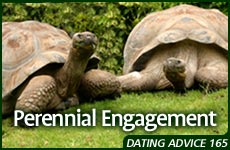 He's shown no interest in setting a wedding date. How long should she keep waiting?

My fiance and I are both in our 50's and he has never been married, but says he always wanted to be married. We met in 2000, but it is now 2004. We both agree we are very compatible as far as likes, dislikes and beliefs.

However, I have become very frustrated and wonder if I should move on, since there has been no talk about planning a wedding.

Furthermore, he lives on the on the West Coast and I on the East Coast (USA). We have not been able to resolve how we will ultimately deal with this issue. This makes me more sad and frustrated. It seems there should be a way to work it out if he is serious.

He calls every night, but still no talk of marriage. What do you advise?

Its pretty clear that your fiance isn't able to move forward on his own. In our experience, the vast majority of singles (men or women) who enter their 50's without ever having been married have barriers that they must identify and overcome before they are able to make the leap of faith to marriage (or to any of the preliminary stages). A small number of individuals in this situation experience some sort of epiphany and, because they have the gift of insight, are able to figure out on their own how to deal with the issues that have blocked them. Most of the time, however, such a person needs intervention.

The fact that your fiance seems to have gotten over the hurdle of becoming engaged tells us that he may very well want to be married, but that desire hasn't translated into a wedding date. In order to be able to address what is keeping him from doing so, your fiance has to be able to acknowledge that he has a problem -- and that clearly is not happening on its own.

We suggest that you bite the bullet and give your fiance the push he needs to confront his situation. Arrange to get together in the near future, and find an opportune time and place to have a heart-to-heart talk. There are ways to raise the subject without being confrontational and putting him on the defensive. Tell him how much you are looking forward to being together as a married couple and that you feel it is time the two of you set a date and planned the rest of your lives together. At the same time, you can acknowledge that you suspect he has concerns he hasn't yet worked through. You can say that you understand this often happens when someone has never been married before.

But you must tell him that the time has come for him to deal with his concerns.

At this point, the rest of the conversation may involve his rationalizations as to why he's not ready to get married. So we suggest that you tell him as follows: "Before I listen to the reasons why you feel you're not ready, I want to know if you agree to address these concerns immediately, and if you are willing to get outside help to do so."

If he denies that he has a problem, if he is unwilling to address his concerns, or if he does not want to seek outside help, or if he isn't willing to do so immediately, it seems to us that the two of you will be perennially engaged, and if you want to get married you'll have to find a different man to marry.

On the other hand, if he is agreeable to your suggestions and genuinely admits that he has to deal with the problem, you should assure him that he will have your emotional support. But you do need to make it clear that beyond emotional support, you will not be able to be the one to help him resolve these issues. He needs a third party, in all likelihood someone with professional training, to assume that role.

What kind of help are we talking about? That really depends on the nature of what has been holding him back. Every person in his position needs a happily married person to give him encouragement, answer his countless questions, offer a realistic perspective of marriage, and hold his hand every step of the way. This is the role of a dating mentor. He may also need the help of a goal-oriented therapist who specializes in helping clients discover what has been keeping them from achieving a goal (in this case, the goal of marriage), ascertain what in their background has contributed to the obstacle's development, and work at overcoming it.

We realize that by discussing this subject with your fiance in the manner we have suggested, you are forcing him to confront the issue or face the end of your engagement. The approach of, "plan the wedding now or I'm outta here!" is more direct, but is guaranteed to result in a broken engagement. Our suggestion may also have the same result, but it is less confrontational and gives him an opportunity to acknowledge that he has a problem and to decide to immediately work on its resolution. We know of many people in his situation who have benefited from such a push, and who then stood joyfully under the wedding canopy.

Dating Advice #103 - Getting a Late Start