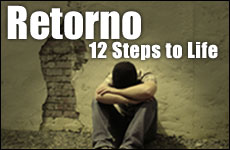 Warriors in the struggle to recover from drug addiction.

Rabbi Eitan Eckstein was serving his four-year tenure as a community rabbi in Mexico when he encountered a shocking fact: There was a tremendous drug problem in the Jewish community in South America. Upon further investigation, Rabbi Eckstein discovered that the problem was not limited to drugs, nor was it limited to South America. His concern and curiosity about the problem led Rabbi Eckstein to establish a network of treatment programs in Latin America.

Upon his return to Israel, Rabbi Eckstein discovered the same problem -- drug use and addiction among mainstream Jewish kids. What was fueling this dangerous and aberrant behavior? He set out to explore this phenomenon, and to work with the religious community to understand and acknowledge the fact of addiction in the face of denial and disbelief. Rabbi Eckstein's response to the crisis was the founding of Retorno Psycho-Educational Center for the Prevention and Treatment of Addictions in Givat Shemesh, Israel. Retorno (which means U-turn in Spanish) has developed into an educational resource for the worldwide Jewish community that offers early prevention and education programs, seminars for students and three-day workshops and consultations to educators and counselors in Israel, Latin America, Europe and North America.

With Israel engaged on so many fronts, the staff of Retorno are warriors in a struggle to save lives.

Rabbi Eckstein's years of experience support a generally acknowledged truth: namely, that the incidence of substance abuse and addiction is not limited to so-called "problem families" or "problem children." Drug use is a behavior that draws kids from across the social and religious spectrum. The "whys" of drug and alcohol usage are many and complex. They include a dysfunctional attempt on the part of the user to dull the emotional pain of some past or current trauma; boredom, peer pressure, curiosity and constant media bombardment that promotes and glorifies drug usage.

"At Retorno, the goal is to deal with and heal the inner pain. There is no blame, only responsibility."

Not every person that indulges in the occasional use of drugs becomes an addict. But some do, and others, while not physiologically addicted, become psychologically dependent on the drug. Whatever factors prompt an individual to begin using drugs or alcohol, addiction always results in pain and suffering and the destruction of normal patterns of functioning for the addict and his family. There is no way out of this cycle, the addict has to extricate himself, and for this, he needs lots of help -- and it has to be the right help.

"Drugs and addiction are not the problem, they are the solution," explained Rabbi Eckstein. "People turn to drugs as an incorrect solution to their deep pain. At Retorno, the goal is to deal with and heal the inner pain. There is no blame, only responsibility." There are many influences and pressures that bring a person to drug use. It's not about assigning blame; the essential first step in recovery is taking responsibility for one's own life.

Most of the time, an addict will not voluntarily seek out help until he has "hit rock bottom," but here, Retorno offers a new approach. Rabbi Eckstein asks the question, "If we wait until the addict reaches the greatest level of suffering, how can we be sure that we will succeed in dragging him out and not lose him to overdose, automobile accidents, medical complications or suicide?" Armed with the belief that "no person is beyond help," Rabbi Eckstein and his staff, which includes psychologists, social workers, counselors and educators, have jumped into the trenches with Jews who are in the throes of addiction to drugs, alcohol, sex, gambling, eating disorders and other related behaviors. In their collective hand is a life ring that holds out the hope of recovery.

By developing a technique to raise the "rock-bottom" level of the addict and convince him to get into therapy immediately, Retorno has altered the usual rules of the game. Preventive work begins with innovative programming aimed at informing and educating groups of students about the dangers of substance use. These seminars accomplish several goals at once. Not only do they educate and inform, but they also teach coping skills that provide the students with tools that will empower them to face problems. But perhaps the most important gain made through these presentations is the forging of a connection. By going out and meeting teens and befriending them Retorno establishes itself as a positive, benign resource for present and future reference. The staff has its finger on the pulse of the street, and the teens already know there is help if it is needed. When teens receive information in non-threatening and non-accusatory settings they are encouraged to ask for help, and many do.

There is no quick fix for recovery from drug addiction; it is a long, arduous and painful struggle. Most participants in Retorno's program stay in residential treatment 6-10 months. Admission to Retorno means intense commitment from both patient and staff. Utilizing their own methods coupled with state-of-the-art treatment protocols, the Retorno treatment team develops an individualized treatment program for each patient that embraces a wide range of modalities. Twelve Step philosophy forms a basis for treatment, but in addition, patients participate in animal therapy, hydrotherapy and group, individual and family therapy, as well as many creative activities such as experiential groups, interactive play, drama, writing and art. Since addicts usually drag their loved ones along in their terrible ride into chaos, parents need help as much as their addicted teens, and Retorno provides it through non-threatening, straight and honest communication. Parents get the feeling that after years of fear, frustration, confusion and hiding, they have found someone that understands them. Parents of recovered teens serve as a vital support system for parents in the early stages of treatment.

In the course of their recovery, patients are encouraged and helped to rediscover their personal relationship to Judaism.

While recovery from substance dependence is the primary goal, spiritual growth is by definition, a strong element in every Twelve Step-oriented recovery process, and while not every patient is religious, all are required in engage in some spiritual activity, such as reading appropriate material, meditation or taking a regular cheshbon hanefesh -- serious introspection. In the course of their recovery, patients are encouraged and helped to rediscover their personal relationship to Judaism. One of the facets of Retorno's treatment plan is the presence of specially trained kollel students, who learn on the premises every day from 9:00 AM until 6:00 PM, including three hours of daily learning with the patients. "We place great importance on building a spiritual-ethical world for the patients...even in the first step of the treatment," Rabbi Eckstein explained. Slowly, through adherence to the Twelve Steps, which encourage the reliance on a Higher Power, spiritual strength and connection are reconstructed. "Gradually, the negativity subsides, and most of the patients begin to connect with the learning, the prayers, and the kollel students. They eventually connect Judaism with the diagnostic therapy treatment and to the Twelve Steps."

Addiction treatment is tough work -- tough for the addict on the road to recovery and tough for the treatment team. It is very interesting and telling to note that most patients who are treated at Retorno were seen by a mental health professional prior to arriving to Retorno, but to no avail, since without special training in the specifics of substance abuse, even a professional can be manipulated and deceived by an addict. "When a youth is first brought for treatment," Rabbi Eckstein explained, "he denies that he has a problem and is not ready to open up. He is still in the height of his using pleasure. There isn't a ghost of a chance that a weekly session of an hour or two would be enough to break through the veil or mask that is between him and the normal outside world...it takes two to three months for him to open up and become aware of his problem. Three full months of 24 hour days, without leaving the site, with a strict therapeutic regimen..."

At Retorno 40 staff members care for 50 patients. This staff consists of six social workers, a psychologist, a psychiatrist, a doctor, a nurse, 12 counselors, teachers, maintenance people and kollel students. The Beit Shemesh facility currently serves 50 people, male and female of various ages and from many different places.

Retorno provides services and training to communities and institutions outside of Israel. More can be learned about Retorno on their web site: www.retorno.org

Autism’s Growing Problem
Blessing on Chewing Gum
Was Rahab a Prostitute?
Extras In Our Own Epic
Comments
MOST POPULAR IN Israel
Our privacy policy