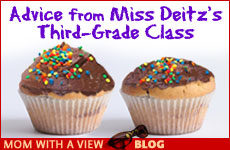 Marriage is about more than giving. It's about putting our spouse's needs constantly and completely before our own.

I think the best insight in Advice for a Happy Marriage, from Miss Dietz's Third-Grade Class comes from the child who suggests, "If there are two cupcakes and the man takes the one with not as much frosting, he loves you."

Wise words from an eight-year-old.

This old soul recognizes that marriage is about more than giving; it's about putting our spouse's needs constantly and completely before our own. That level of self-sacrifice -- whether it involves cupcake icing, or getting the crying child, or allocating limited finances -- both creates and is evidence of a good marriage.

We have been brainwashed into thinking that the true giver is a schlemiel.

We believe that if we give to such a degree we will somehow be hurt by it. We will be taken advantage of; we are allowing ourselves to be doormats and shmattas.

We have been brainwashed into thinking that the true giver is a schlemiel and a fool with no instinct for self-preservation.

Judaism suggests the opposite. The most life-preserving and life-affirming thing you can do is give. If we don't want to give to our spouses more than ourselves, then our marriage isn't based on caring, it's based on selfishness. What is in my best interests? What am I getting out of this? (I would argue that giving is also in our self-interest...)

And there's a decent chance it won't last. Any significant relationship requires commitment to the needs and desires of the other party, a commitment that transcends ego and personal appetite.

Sometimes it's difficult. We're tired. That last piece of chicken or brownie looks good. We were saving up for a new pair of shoes. We're tired.

But the reward is in more than the gratitude of our spouse; it's in the strengthening and deepening of the relationship.

There's no question if one of our children wanted that cupcake we'd give it to them and take particular delight as they smeared the icing (that icing that we wanted!) all over their face!

We're just confused about which relationship is the more important one. We're just dismissive of the needs of adults (unless, of course, they're ours). We're just misled by the values and behaviors we see around us.

The Talmud teaches us that with the destruction of the Second Temple, prophecy went out of this world, except for fools and children.

I don't know if any of the kids in Miss Dietz's third-grade class are prophets. I don't even know if they've mastered their multiplication and division tables. But I do know that among them is one very wise third-grader who's going to make someone a very good husband or wife. 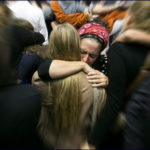 No Child Left Behind1 min read