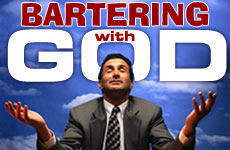 I never believed in the Divine Barter System. Never believed those "miracles" would happen… until they happened to me.

I've never been one to believe in the "Divine Barter System." You know, where something terrible is happening or about to happen in your life and you cry out to the Heavens (in some cases for the first time), "Gee, God, I know I haven't been very religious and all, but if you do X for me, I promise I'll do Y!" And then "X" happens.

Until they happened to me.

I had been at my new company for two and a half years and things were going pretty well. First, I had gotten the job wearing my kippah during the interview (See: The Kippah Quandary by Yours Truly for that story). My manager was great -- a real spiritual guy and a truth seeker like me. We would spend long hours discussing God and the nature of the Universe. He liked my work and he liked my style. And since the old adage of, "Your manager will either make or break your liking your job" is true, my work life was pretty calm, pretty easy, pretty uneventful.

My manager, the man who made my job so pleasant, who so venerated my religiosity, called to say he's quitting the company. A pit formed in my stomach. Losing a good manager when you work for "the Man" (a big corporation) could mean something good, could mean something bad, but it always meant uncertainty. Who would my new manager be? Would he be a nice guy? Would he have a particular distaste for guys in kippahs? A lot left to chance here. And in this case, my luck had run out.

I first met my new manager, Paul*, at a restaurant in Nevada where he lived. He wasn't much of a conversationalist. I found out he was married with two kids, not Jewish and only recently had become a manager. Forget women's intuition -- I didn't need it to get the bad vibe this guy was sending me. For whatever reason, Paul just did not like me from the get go.

Paul made it clear that kosher meals were fine, but not if they interfered with "important activities" like group dinners.

The first issue that came up was my keeping kosher and needing kosher meals at all company meetings. Paul made it clear that kosher meals were fine, he supposed, but not if they interfered with "important activities" like group dinners.
Next came the "Shabbat Controversy." When I told my previous manager that I had to be home Fridays before sundown, his response was, "No problem. We'll do whatever is needed to make sure you're home in time."

Paul's only response was, "Well, I'll have to check the company policy on that."

I finally had to tell him, "Paul, this is non-negotiable. The Sabbath is sacrosanct. It's not my rule; it's God's."

Paul glared at me across the table. I quickly realized that Paul was a man who had a lot of machismo, a man who liked to be in charge, a man who did not like to be told by his subordinate that something was "non-negotiable."

When the meeting ended, I was convinced that my initial read on Paul was accurate: this guy did not like me. And he began to show it immediately by doing everything he could to make my work life miserable. He was constantly baiting me to argue with him in any conversation we had.

I never took the bait. Instead, I focused on being the model employee. I did everything he wanted me to. I agreed with his opinion even when I thought his latest idea must have come from Mars's mentally challenged region. I even complimented him whenever possible on his management technique.

I began to worry that my job might actually be in jeopardy.

But nothing worked. He only had "constructive criticism" for me about everything I did. Even when objective measures of my success, such as sales numbers, were great, he was slow to acknowledge them to me or anyone else. And he always had a negative comment to add in regards to any success I had. The nicer I was and the harder I worked at my job, the meaner he got and the harder he tried to make me look bad.

I began to worry that my job might actually be in jeopardy. To make matters worse, my sales numbers started off the year under objective. My territory was at 84% of expected sales after 3 months. I was scared. Very scared. And worse -- the angst was starting to spill over into my personal life.

Just at this time, a dear friend of mine asked me to come by his office to talk. "What do you want to talk about?" I asked.

"Your spiritual growth," he replied.

When we met, we spent the first half hour talking about my painful work situation. Then, my friend changed the subject. "I just have two questions," he said. "Where are you going to synagogue and what are you doing for Torah learning?"

I was stunned. "What do you mean?" I asked incredulously, "I go to the same synagogue you do -- Aish HaTorah!"

I was slightly embarrassed, but only by my own behavior. My friend was right. Ever since my wife and I had kids, I've used "little kids and no sleep" as an excuse to go from a "7-day-a-week-minyan-and-Torah-learning" guy, to "Pray-at-home-and-do-little-Torah-learning" guy.

My friend then shared his personal story of the effect of prayer and learning on his business. He said that when he committed himself to three things -- praying everyday with a minyan, daily Torah learning and outreach to fellow Jews -- his success at work skyrocketed.

"Come on," I said. "We're talking about objective sales numbers and a rotten boss who's not leaving any time soon! Those are not things God usually deals with!"

"Are you seriously telling me that God who took the Jews out of Egypt and won the '67 war for Israel in six days can't affect your sales numbers?"

My friend looked at me shocked. "Are you seriously telling me that God who took the Jews out of Egypt and won the '67 war for Israel in six days can't affect your sales numbers and turn around a bad situation with a manager? Besides, maybe if you had been doing more of these three things, you wouldn't have ended up with this guy as your manager. I think God's trying to get your attention."

My friend suggested that I try committing to three months of coming daily to the 6am minyan and the two Torah classes that followed. I agreed since the only thing I could think of that I was doing at 6am was, uh, sleeping.

During the first month of praying with the minyan and learning every morning, I prayed very hard that my sales number would turn around and my manager would ease up on me. I really concentrated on talking to God from my heart.

When I saw my sales number for that first month of me being a "Daily-minyan-and-learning" guy, I was shocked. My territory skyrocketed to 125% of expected sales for that month! The next month -- 113% of expected sales, and the month after that -- 104%. My year to date performance had now topped 102% of expected sales! I had the largest single territory growth in the entire Western Region over those three months!

But wait - there's more. In the third month of my commitment, I got notice that I had been selected to be a part of new elite sales force -- with a new manager! I was finally finished with Paul!

So was all this an example of the "Divine Barter System" in action? I don't know. But I do know, however, that God is always talking to us, always trying to get our attention and steer us in the direction that will allow us to get the most out of life. We need to look for God's messages, and more importantly, we need to take action on those messages. I also know that when you're doing what you are supposed to be doing in the eyes of God, He'll take care of the rest.

But the best thing I got out of this whole ordeal is my new morning routine of starting my day with community prayer and Torah learning. I feel so great, so centered, after praying with a minyan and going to three daily classes -- and all before 9am!

*Not his real name.

The Jewish Ethicist: True to Your Word
Grilled Israeli Lamb and Veggie Kabobs Recipe
How To Barbecue Like an Israeli
Pain is a Reality; Suffering is a Choice
Comments
MOST POPULAR IN Current Issues
Our privacy policy