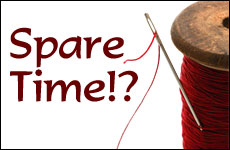 I like to work. What can I say? So I put myself to work finding a new hobby.

I've heard many a daunting question in my life, such as, "Can you be responsible for the emergency exit door on the flight?" or "Will you drink this barium as quickly as possible?" But the most horrifying question ever posed to me has been: "So, what do you like to do in your spare time?"

That inquiry forces me into a self-confrontation of the most unsettling stripe. For the life of me, I've never come up with anything original that was also true. I can't honestly say "I read," when it's periodicals and blogs that clog my eyes, or "I garden," when I merely harvest herbs, snip and sniff blossoms that are products of my gardener's mulching and manure-ing. Fearing the stigma that I was dull, driven to all work, no play, I opened my mind to some hobbies that might "take."

Fearing the stigma that I was dull I opened my mind to some hobbies that might "take."

For my 30th birthday, my friend, Jon, announced he was taking me to Vail, Colorado, to ski. I wasn't quite clear whose gift this was, but I agreed. How dangerous could it be? He was a rather laconic Jewish guy from the wealthier burbs, who rarely exerted himself beyond driving us out to dinner. He would never put us at risk.

Well, he had apparently learned to ski prenatally. To him skiing was like falling off a log. To me it was like falling off a cliff. We met friends of his there who spoke fluent ski as did Jon, as soon as he slipped into his thigh enhancing designer togs. He hastily rushed me into the most unflatteringly asphyxiating rental garb, in unnatural fabrics and hideous colors, to join a Beginners' Class with a bunch of children, as he and his friends zoomed off with all the grace of gazelles.

My classmates, all under four eleven, fearlessly close to the ground, took to it like fish to frozen, flakey water -- were fish to ski. To my credit, I learned to brake without clinging to a tree and to fall with legs intact. But I had a nasty accident my first trip up the lift where I misjudged my jump off and ended up in a pile of skiers, so tangled in a jackstraw pile up that we had to be teased apart by four instructors.

As my obnoxious classmates were slaloming by the close of our first day, the joy of barreling down a too steep hill at breakneck pace in gangrenously low temperatures had eluded me. Instead, I mastered the art of sitting prettily in front of the fire in the posh lodge waiting for Jon to careen down treacherous slopes to dine. My first was my last ski trip.

The next year I tried camping with a bunch of the girls. We drove for hours in a noisy van singing the Hebrew songs they had learned in Catskills camps, and eating trail mix like true wilderness pioneers, only to end up in sleeping bags on hard ground too near a parking lot, pay phone, rest room, and redneck biker convention. The sky was shooting stars, while beer cans were trash bins were being pelted with beer cans. This wasn't a peaceful commune with nature. It was a cacophony of threat.

Knitting was a silly idea. Oh, I mastered the technique well and began clicking away whilst on the sets of film jobs, endlessly awaiting my shots, making scarves in stop action speed sessions, which altered their symmetry when I'd return from a scene. "Where was I? Which end? Did I really intend to fringe or was that a mistake?"

I hadn't taken into account that I'm a sophisticate, look lousy in multi-colored yarns, am allergic to mohair, that none of my friends would be caught dead in my idiosyncratic designs, and that we all lived in Southern California where a muff is rarely a necessity. I sent my favorite Aunt Vivian in chilly Long Island a masterpiece that came through me in a Zen of knitting sort of way for Hanukah. "Wow," she wrote politely. "I've never had a burgundy and camouflage scarf before!"

"Wow. I've never had a burgundy and camouflage scarf before!"

Next I tried circular knitting and cranked out some cool wool caps, but they tended to bunch up or just pop off my oversized, cartoon character head at hip hop events, and leave my hair smelling all sweaty.

See, I feel a hobby should have a purpose, an aftermath of satisfaction, not just in-the-moment, ephemeral darn good fun. It's my inborn Jewish workaholic credo. So, I've come up with one that I know will be with me for the rest of my life, because I've been already doing it all my life.

"I collect pillows," I tell you smugly.

"Nooo," I say with a smidge of defensiveness. "From department stores. Bed pillows.
But they must meet my very exacting standards," I embellish. "Never foam, which bounces my brain too much, and has a constant rustling sound inside it. Preferably goose down. Not so flat that I feel the bed springs or spines of feathers, or granularity as they age and bunch up. Not so fluffy that I feel like I'm sleeping with my head on a shelf.

"My perfect pillows have durable, drool proof ticking. There's nothing so threatening as seeing a stain on, or tufts of fowl feathers trying to escape from, your intimate cuddly cozy headrest! Malleable, able to be shaped to my mood du jour, du nuit or du nap, it must cradle my cranium without blocking my nostrils. Its case must be thousand thread Egyptian cotton, soft, in a dark color so as to reflect no stray light." You are impressed.

My collection provides pajama party guests with exercise, as they writhe to make room amongst masses of pillows for themselves, as, when made, the pillows pile to halfway from the head of the bed like an avalanche from a snowy mountain in Vail. Their reward is cozy but crowded rest.

I love my hobby. Easy, inexpensive, so relaxing. I lie around in comfort ruminating about what other hobby could possibly be worth my time.

One Drink Too Many: My Journey of Breaking Free from Alcohol
The Scandalous History of the Aleppo Codex
Who was Two-Gun Cohen?
Why Really Everyone Believes in Free Will
Should Jews Support Ukraine?
The Jews of Cuba
Comments
MOST POPULAR IN Funny Stuff
Our privacy policy