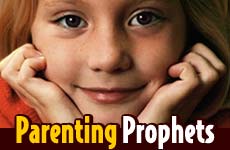 Every so often something happens with one of my kids and I begin to understand what parenting is all about. This is one of those moments.

What exactly did God have in mind when He invented the institution of parenting? Why do I, a full-grown adult, have to deal with messy spills, dirty diapers, muddy shoes, kvetching, whining, yells, screams, sibling rivalry, cuts, splinters, tantrums -- the list goes on and on.

But every so often, something happens with one of my kids and I begin to get it.
This is one of those moments.

I was looking forward to putting the kids to sleep and having quiet night at home so I could finally gets some things done.

But things just weren't going as planned. Avrami (aged eight) couldn't fall asleep and kept coming downstairs asking for a drink. Atara (aged five), fell asleep, but was woken up by some loud noise outside, and little Ahuva (1-year-old) woke up crying incessantly as well. At least my four-year-old Esti remained fast asleep.

I was at a break point. I needed to get lots of things done that night and I couldn't deal with the kids being up late, which would also mean they would be tired in the morning and we'd have to rush them out of bed and into school with their eyes half shut and terribly cranky.

I controlled myself and quickly whisked them all back to bed satisfying their requests and needs. Things were quiet again -- for around 10 minutes.

Once again, Avrami came down wanting a drink and didn't look like he'd be falling asleep any time soon. I just told him to read and rest on the couch, hoping he'd at least fall asleep there, and I'd carry him up later. A few minutes later Ahuva woke up,
wanting to be held. What can you do? That's parenting. But when Atara woke up again, I was about to blow my top.

"I can't believe that there are three kids up this late!" I said to Atara.

Atara quickly retorted, "Abba, there aren't only three kids up, there are four."

"No, no, Abba." Atara explained. "God is Our Father and you, Avrami, Ahuva, and me are all His kids!"

I was floored. "Out of the mouths of babes and sucklings, You have established strength" (Psalms, 8:3). That night was worth every moment of parental torment for that line alone.

How true it is that we are God's kids. And how infrequently we think of things in those terms.

Do we really believe that we have a Father in Heaven? That He loves us and wants to see us succeed? That the challenges and struggles we face are His gifts to help us grow? That 'Our Abba' takes care of us? That we have an All-Powerful Parent who can help us clean up our messy spills and muddy shoes? Are we truly 'real' with God as Our Father?

The Talmud states that when the Temple was destroyed, prophecy was taken from the prophets and transferred to children (Baba Batra 12b). If we'd only treat our children as prophets some of the time, we'd glean tremendous lessons from their simple yet steadfast faith.