A Steppingstone to Judaism 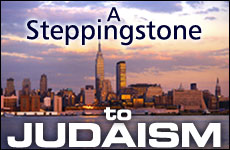 Aish HaTorah's Metro Trip was the best trip of my life.

This article originally appeared in the Jewish News of Greater Phoenix

In March, my mother called me on the phone and told me about an e-mail she received advertising a summer trip to New York for college students. The ad said the trip would take us all around Manhattan; that we'd get to see all the tourist attractions and experience the New York City night life. Best of all, the cost of the trip was only $200. What more could a 22-year-old kid want?

"Well, it's sponsored by Aish HaTorah. It's a Jewish student trip."

This caused some red flags to go up in my head.

My interest in Jewish activities before this summer was somewhere between getting a root canal and ancient Chinese philosophy.

My interest in Jewish groups and activities before this summer was somewhere between getting a root canal and ancient Chinese philosophy. In other words, there was no interest.

On the other hand, how bad could a 10-day trip to New York really be?

I've always been skeptical of religious trips because of a concern that they try to force religion on you. When I found out Aish was an Orthodox organization, I feared the worst

While I take pride in my Judaism, I am by no means observant. I was scared that we would be forced to go to services every day, that men and women would be kept separate throughout the trip, and that we'd be stuck in some religious class every night.

The 10-day trip started on May 27 and ended June 5. I can honestly say it was the best trip of my life. It was better than any spring break or summer vacation.

I met more Jewish college students in those 10 days than I have through four years of college. There were 30 of us from all across North America -- including fellow Arizona State University student Michael Feld. Best of all, we all connected with each other. 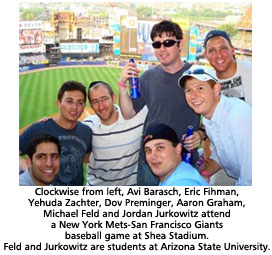 Every day, we woke up and saw all the finest sites the city has to offer. We saw the Statue of Liberty, the Empire State Building, Central Park and even a New York Mets baseball game. We rode the subway all over town, which is truly a fascinating experience for someone from Arizona.

At night we had free time to go check out exactly why New York is known as "the city that never sleeps."

In between all the sightseeing and partying, Aish treated us to a wide variety of esteemed speakers. We heard from CEOs of well-respected stock firms such as Bear, Stearns & Co., respected rabbis from the New York community, and even Kenneth Cole.

These were truly real-world experiences that you can't get in a classroom.

With all these activities, I couldn't figure out how Aish could only charge $200 for the trip. Rick Probstein, the director of Aish Discovery, told me that donors heavily subsidize the trip.

"Aish, through our many networks, has been able to secure large financial donations from Jewish philanthropists across the country," Probstein said. "Our main goal at Aish is to inspire a strong sense of Jewish identity and pride among young adults.

"One of the biggest problems facing Jews in America today is the threat of assimilation. Whether one is Orthodox, Conservative or Reform doesn't matter on this trip. Our aim is to connect Jews with other Jews."

Adam Stiefel, a 21-year-old student at Penn State University, said the trip really helped break down misconceptions he had about observant Judaism.

"I was apprehensive about coming on this trip because of the fear of the unknown," Stiefel says. "But everyone was very accepting of everyone, and nothing was forced on us."

This was the third summer of the Metro Trip. In all, Aish sponsored six trips this summer.

Each 10-day trip is directed toward a different group of college majors. For instance, the trip I attended was called "The Wall Street" trip, because it featured many speeches from business titans around the city, as well as trips to Wall Street and stock firms. Other trips were directed toward art and science majors. They featured many of the same speakers, but also included activities such as a trip to the Metropolitan Museum of Art.

Aish also runs similar trips in the winter. In the three years of the trip's existence, more than 800 students from around the world have attended, including more than 240 this summer alone.

Whether you go to services every Shabbat or barely know what Shabbat means, this trip is a great stepping-stone in any Jewish young adult's religious process, a process that I now have because of Aish and its donors.

For information on trips to Israel, visit www.goisrael.org

Jordan Jurkowitz, 22, will graduate from Arizona State University in December with a degree in journalism and a minor in religious studies.

6 Things to Know about Jewish Cleveland, including LeBron James

Anti-Semitism and the UN
Where Are We? The Body, Brain, Soul Problem
Dr. Sheila Nazarian’s Escape from Iran
The Miami Boys Choir is Taking over TikTok
Comments
MOST POPULAR IN Israel
Our privacy policy
Aish.com Is Looking for Great Writers