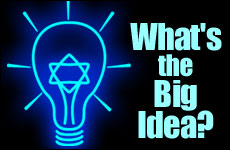 You probably heard by now that Brandeis University is holding a competition for The Next Big Idea in Jewish life. Philanthropist Charles Bronfman is backing the competition, whose lucky winner will spend two salaried years at the university developing his or her idea into a book-length project that "aims to change the way Jews think about themselves and their community."

I was excited when I heard about this, because I am chockablock with ideas about how to change the Jewish world. But then I thought about having to relocate to Boston, and besides, I have enough time concentrating on one idea for two hours, let alone for two years.

So instead I have decided to make my ideas "open source," and by sharing them here I am offering my blessing to anyone who wants to pick up on the concept and enter it in the contest. Just give me a shout-out in the acknowledgments.

Does anyone on planet earth who is not a teenager know what to buy a teenager? Too old for toys, too young for Scotch, b'nei mitzvah are gift-giving nightmares. You can go the Judaica route, but just how many Kiddush cups can one 13-year-old use? Books are always a nice idea, because they look good on their parents' shelves. So how about an online registry, where Joshua and Ariella can post their wish list, guests can click on "buy me," and everyone can focus on the deeper questions of the day, such as "Are they serving sushi?"

You know the drill: Cocktail hour. Interminable speech by the president. Ditto by the executive director. Guest choir sings the entire Naomi Shemer songbook. And special guest speaker tells how his experience as a pro athlete/television actor/Washington pundit relates to the work of your school/shul/research fund. Meanwhile, the Giants and the Packers are in overtime.

So how about this: Announce a fund-raising goal for the dinner and promise to lop off chunks of time for every step closer you get to the goal. Reach the goal before the dinner - everyone stays home and watches the game!

For the average American Jew, learning Hebrew is like the old TV game show "Beat the Clock." Remember? Gene Wood would announce the stunt: "All you have to do is use this spoon to carry the egg to the bucket." And then he added the challenges: "But you'll be blindfolded - and wearing roller skates!" Modern Hebrew is exactly like that. All you have to do is read these words. But we're going to take away all the vowels. And the capital letters, so you can spend a tormented hour before you realize that 'eye-zen-how-er' is not a verb meaning to invade Korea. And if you want to read Torah, no punctuation! Fun!

In modern Hebrew they took away all the vowels so you can spend a tormented hour before you realize that 'eye-zen-how-er' is not a verb meaning to invade Korea.

So let's finish what Ben-Yehuda started and bring Hebrew orthography into the 13th century. Hey Israel, buy a vowel!

Hagba, or the act of lifting the Torah scroll, is one of the most dramatic moments of Shabbat morning services. And who doesn't like a little drama packed into the morning prayers, like the fear that somebody's uncle will break his wrist trying to lift a 400-pound Torah scroll over his head, after which the congregation will have to fast for the next 30 days?! I say we fund a weeklong camp to coach hagbaniks, with sessions on weight training, technique, and the all-important walking-backward-and-sitting-down-without-landing-on-the-floor. And how about "Fantasy Hagba Camp," where you can train side-by-side with legendary Torah lifters, like Irwin "Six Columns" Zussman of Oceanside, NY?

We all know that kosher standards are becoming ever more strict. When it comes to certification, glatt is the new glatt, as the saying goes. So how long before standards become so high that the fervently kosher no longer trust the kashrut standards in their own homes? That's where Mashgiach! Mashgiach!(c), the home supervision people, come in. Let's train yeshiva boys to sit in your kitchen while you prepare a meal. He'll read the labels, check eggs for blood spots, make sure you use the right pots and pans. A small price to pay for peace of mind. (Bar mitzva lessons are extra.)

That should get you started. And if these ideas don't change the way Jews think about themselves and their community, they're just not trying hard enough.

Andrew Silow-Carroll is editor in chief of the New Jersey Jewish News.

The Book of Ira
Korach 5782: Visit to Lift the Spirit
That Time The Ivy League Found A Way To Limit Jewish Enrollment
Would You Rather Be Right or Happy?
Comments
MOST POPULAR IN Jewlarious
Our privacy policy