The $700 per Pound Mushroom 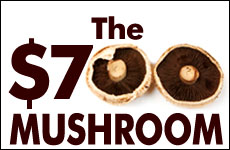 If a mushroom can cost $700 a pound, how much are you worth?

For kicks, my wife and I recently went to Wegman's, a and trendy supermarket that carries very exotic foods and products.

We entered the store, and started scanning the produce section for interesting and exciting new fruits and vegetables. We came to the mushroom aisle and found numerous types with fun names, some surprisingly selling for $20 a pound. Then I noticed what looked like black pellets behind glass casing under lock and key. The sign said, "$699 a pound." I did a double-take thinking that the dot between the 6 and the 9 must be missing, and that it should have said $6.99. Or that this trendy place must have a sense of humor. I called a sales assistant over and asked what the story was.

Very seriously she explained to me that the price was real, and that those black pellets were extremely valuable to many people. They were truffle mushrooms and world-class chefs buy them due to their powerful potency and flavor. They usually purchase them by the quarter pound, which lasts a very long time, as they sprinkle just a dash into specialty dishes.

Apparently these truffle mushrooms are so rare that they actually fetch a price of $700 a pound.

I was astounded that anyone would pay $700 a pound for a mushroom. Then I realized what a powerful lesson the truffle mushroom is for life.

When something is rare and precious, it becomes valuable. Last I checked Jews represent less than 1 percent of the world's population. High estimates put our number at 14 million out of a world population of 6 billion. Jews are extremely rare indeed.

When God looks upon His world, He digs deep and finds extremely rare and valuable Jews, His ‘truffles'.
In fact, each individual is the most exquisite and rarest possible. After all, since the beginning of time there never has been, and there never will be, a person exactly like you.

We must internalize the fact that God created the world for each and every one of us. Every person has a specific role to play in the grand scheme and we must discover the part we are meant to contribute. "It is tragic when a person does not recognize his weaknesses. But it is horrific when he doesn't know his strengths!" (Rabbi Yeruchem of Mir).

God created the world for each and every one of us.

We will soon begin a new year on Rosh Hashana. The new year is always a time for reflection and introspection. People generally accept resolutions upon themselves, but they might be accepting the wrong ones.

My friend tells me he feels he should be dedicating more of his time to others. He doesn't think he is fostering enough kindness in his life. He decides to join the local Shabbos packages for the poor organization. If I react by saying to myself. "That's a great idea. I'm going to do that too," I may not be responding the way I should.

Kindness may be the perfect area for him to work on, but is that where I need to channel my energies to fulfill my mission? Maybe I am putting a lot into developing kindness already. Maybe it's time for me to find more time for Torah study. We are not all the same. I need to discover my personal strengths and weaknesses; not just copy my friend. In order to do that, I must dig beneath the surface of my personality to see my qualities and challenges.

A Touch of Eternity
How This 6 Generation Bread Baker Brought Back Israel’s Ancient Grains
Olivia Newton John’s Grandfather was a Nobel-Prize Winning Jewish Physicist
Don’t Believe in Other Gods Versus God is One
Comments
MOST POPULAR IN Israel
Our privacy policy
Aish.com Is Looking for Great Writers