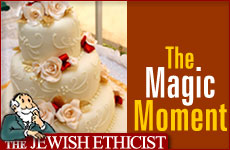 Are wedding celebrations getting out of hand?

Q. In a recent column, you wrote that it is generally fair for parents to contribute to making a wedding celebration according to their means. Shouldn't we condemn lavish weddings?

A. Anything good can be taken to extremes, and having a memorable wedding is certainly one. Opulent weddings, or those beyond the means of the families, can be wasteful and immodest. But fundamentally, Jewish tradition has always recognized that any wedding is a momentous and memorable event and should be celebrated in a joyous and dignified fashion. The object is not to show off wealth, but on the contrary to make sure that every bride and groom, rich or poor, are queen and king on their wedding day. The Midrash teaches:

A groom is like a king. Just as all praise the king for the seven days of a feast, so all praise the groom for the seven days of the feast. Just as a king wears clothes of honor, so the groom wears clothes of honor. Just as a king has joy and feasting before him all the time, so the groom has joy and feasting with him all seven days. Just as the king does not go out unaccompanied, so a groom doesn't go out unaccompanied. Just as the king's face shines like the rays of the sun, so the face of the groom shines like the rays of the sun, as it is written, "And [the sun] is like a groom emerging from his canopy". (Psalms 19:6) (1)

A bride also is likened to a king in the Talmud (2), and the Talmud also tells us that the king of Israel Agrippas gave an ordinary wedding procession precedence over his own royal entourage. (3).

The Mishna likewise tells us that after a couple become engaged, it is acceptable to delay the marriage in order to enable the bride and groom to prepare themselves, and the commentators explain that this includes the need to amass the means not only for the dowry (the needs of the household) but also for the wedding celebration itself. (4)

It goes without saying that the human element is primary in the celebration, and the material dimension is secondary. There is great emphasis in Jewish tradition on having adequate attendance at the wedding party, and Jewish law states that even regular Torah study, which is generally considered the highest opportunity to cleave to God's ways, should be interrupted to accompany a bride and provide respectable attendance at a wedding. (3)

But the material celebration is also not neglected. For example, music for dancing is required. Rabbi Yaakov Segal, one of the most influential medieval authorities, ruled that having musicians at a wedding is "the principal rejoicing of the bride and groom".(5) A wedding feast is also a requirement. (6)

Our prophets tell us that God demands that we "go modestly with God" (Micha 6:8), and Jewish law includes many traditions to keep weddings from being immodest or immoderate. Certainly having adequate resources to build a household should take precedence over a fancy wedding party, and having a dignified meal for a few dozen close relatives and friends is an adequate fulfillment of an ideal Jewish wedding.

But while we shouldn't splurge on wedding expenses, we also should not stint.

Having a joyful celebration according to the means of the families has an important role in demonstrating to all that the wedding of any bride and groom is a momentous and joyous occasion, and reminding them that their union is not only a private affair but also a source of rejoicing and happiness for the entire community.

The Jewish Ethicist: Bad Buyer
It Takes A Lot Of Faith To Be An Atheist
How Instagram Brought Back This Nostalgic Soup
What Makes Eli Run?
Comments
MOST POPULAR IN Current Issues
Our privacy policy