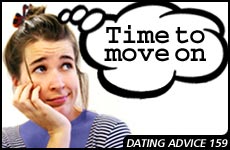 After a broken engagement, he has built a new live for himself. She's stuck.

I'm 24 and have been unattached now for over a year after being engaged to someone for about nine months. The whole courtship lasted two years. Since then I've been out on a few dates, but nothing serious, and I just don't really know what to do. My former fiance has moved on, is going on lots of dates, and is living in the home we planned to live in when we were married. I can't seem to stop resenting him and I actually feel sometimes like I hate him for forgetting about me so easily and being so mean when we broke up. He seems to have everything while I feel like I have nothing.

I used to have a tendency to be attracted to not-so-nice guys who treated me badly. I find it easier to spot this now and turn down dates with that type of person. All I want is someone kind with a good heart. Yet that seems to be too much to ask, as all the nice guys seem to be taken!

I just wonder how to get over my broken engagement and move on. I would like to get married, but I am scared of getting hurt.

I am happy in the other areas of my life. I have a good job, nice friends and am moving forward in my Judaism. I miss my ex, but there is no way we will get back together. I can't keep punishing myself for it not working. As much as I can, I have come to terms with that and want to move on. I hope you can advise me.

You are right that enough time has passed since the break up for you to move on and find the man who really is right for you. However, as you have found through your own experience, everyone mourns differently and it takes some people longer to get over a loss than others. What is holding you back from doing so is the fact that the man you once planned to marry moved on faster than you did, and it hurts you a great deal that he has seemingly gotten on so easily with the rest of his life.

We do not know whose decision it was to end your engagement, but we do know that both parties experience pain whenever an engagement ends. Some people agonize over the decision to end an engagement, and when they actually go through with it they have already completed a good part of their mourning process. Others grieve after the break-up, and even if they are able to return to the dating world relatively soon afterward, it is because they're finished grieving.

It seems to us that in order for you to be able to move forward in your own life, you will need to do more than merely complete the mourning process you have been living through. You will also have to let go of the resentment you feel toward you ex for moving on before you were ready. You need to acknowledge that he's already dealt with his loss. In addition, it is time for you to let go of the nagging belief that the two of you really should be together. We know that it has been hard for you to do this; on an intellectual level you understand that since he has moved on you aren't going to be reunited, but on an emotional level you hope that he will retrace his steps. You need to look at the reasons you aren't together anymore so that you can understand why you really weren't right for each other for the long term.

You started seeing this man when you were 21. Many couples who begin dating as young adults do not endure, even though they develop a close emotional connection and at some point genuinely believe that they will spend their lives together. Often, this is because one or both of the parties experiences a great deal of personal development during this time, discovering aspects of themselves for the first time, while fine-tuning aspects of their personalities as well as their values, expectations about the future, and long- and short-term goals. Looking back, can you see how much you and your ex each changed and grew as individuals from the time you first met, until the time your engagement ended? At some point, the relationship was no longer right for one or both of you. That's why the two of you can't recapture what you once had.

We hope that ultimately you can view your two years together with the mixed emotions it deserves. Despite the pain you experienced when it ended, your courtship filled an emotional need at the time, contributed to making you the person you are today, and helped bring you closer to meeting the man with whom you will be able to build an enduring life together.

Working these feelings through will help you move through the final stages of grieving your loss. You may be inspired by the book What Doesn't Kill You Makes You Stronger: Turning Bad Breaks Into Blessings by Maxine Schnall. And if you find that you aren't making any progress, you may need a therapist to help you along.

We have one piece of insight that may help you leave your broken engagement behind and move forward. It could be that the reason that you are having such a hard time getting over your broken engagement is that you never completely dealt with another loss in your life. Your telling us a bit about your history, having been attracted to mean men, being badly treated by them and their families, giving us the sense that this aspect of your life may also not have been fully resolved, and may be tied in with your sense of loss. These experiences may also contribute to the sense of betrayal you feel now that your ex has moved on. These issues may be a little too heavy to deal with on your own. A trained mental health professional who specializes in focused or goal-oriented therapy is the best person to help you deal with all these issues and move on with your life.

Additionally, you need to remember that you are still young, and there are plenty of great guys out there. You are truly blessed to have so much going for you right now -- happy about yourself and your job, enjoying the companionship and emotional support of good friends, and growing spiritually. We hope that within a short time, you'll meet the right man for you, and build a beautiful life together.

Dating Maze #304: We Have Concerns