Holy Woman and Her Guests 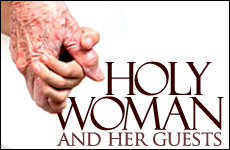 One night, at about 2 am, Yaakov Moshe and Chaya Sara Kramer were awakened by a loud knock on their door. When Yaakov Moshe opened the door, he found two women standing there. Asking no questions, he immediately invited them in and gave them something to eat, as Chaya Sara, afraid of nighttime intruders, timidly helped him. The women explained that they had wanted to stay with someone else in the moshav [rural community], but the other family didn't let them in. As Yaakov Moshe and Chaya Sara were making up their own beds with fresh linen for the women (they themselves would sleep on the concrete floor), she whispered to him, "Why did they come so late at night?"

Yaakov Moshe answered, "Why do we need to know? If someone comes to you for something, you give to them." 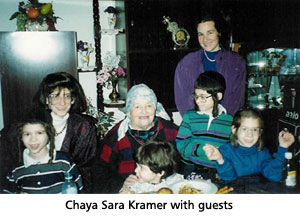 The Kramers' hospitality was not reserved for Shabbos guests. Any person who came to their house at any hour of the day or night was treated like an honored guest. "The way they received everyone was unbelievable," recalls their neighbor Esther Shutz. "The two of them literally ran to the door. They would exclaim, ‘Oh! What an important guest has arrived!' Every guest was made to feel so very important."

"Guest" included even people from their moshav Kfar Gidon whom they saw daily. Tamar Cohen, a neighbor 40 years Chaya Sara's junior, remembers: "Chaya Sara would announce each visitor before they entered, calling each person ‘dear.' When I came, even just to borrow a cup of sugar, she would announce, ‘Dear Mrs. Tamar Cohen has arrived.'"

As soon as the guest entered their threshold, the Kramers would serve him or her drinks and something to eat. "Sit down. What will you drink?" they would ask, and, without waiting for an answer, they would start pouring cola and loading the table with food. "Everything they had in the house, they put out on the table," another young neighbor testifies.

Yaakov Moshe's niece Pnina recalls, "In their house, you couldn't empty your cup, because they would immediately refill it."

The Kramers made no distinction between one guest and another. Great rabbis, ordinary people, wealthy visitors from abroad, poor beggars, old and young, Ashkenazim, Sephardim, Hasidim, Litvaks, religious and non-religious -- all were received with honor, joy, and love.

They who lived so sparsely, loved and gave so profusely.

The Kramers' love for other Jews was expressed through every part of their bodies: their eyes, their smiles, their voices, their hugs. Yaakov Moshe typically kissed on the shoulders the men who arrived, while Chaya Sara often hugged the women.

Their legs also took part in the mitzvah. "They were always waiting for guests," Simcha Heitler remembers. "Chaya Sara would look out the window to see who was coming. As soon as she saw me, she ran outside to greet me."

Any person who missed the last bus that passed Kfar Gidon would be invited to sleep at the Kramers. One evening Chaya Sara and Tamar Cohen were conversing near the bus stop. A young woman, a stranger, was standing waiting for the bus. Chaya Sara did not consider it safe for a young woman to travel alone at night. She invited the girl to sleep at their house.

Once Yaakov Moshe brought home a man with severe epilepsy. He stayed with them for several months.

The Kramers lived in a two-room shack without real flooring, running hot water, a washing machine, or even the luxury of an oven. All the money they earned through their small farm and herd of dairy cows or Yaakov Moshe's work as a kashrus supervisor, they gave away to needy people.

Yet, they who lived so sparsely, loved and gave so profusely. When one couple from England arrived to visit, Chaya Sara put out drinks and grapes for them. "Massive amounts of grapes," remembers Sheindy Leiber. "You'd think they had a lot. Of course, they had nothing. But they gave us massive amounts of grapes and other fruit."

According to Jewish law, the mitzvah of hospitality is fulfilled by walking the guest out the distance of approximately eight steps as a token of honor. Sheindy Leiber describes how, when she ended her visit, Rebbetzin Chaya Sara escorted her all the way to the entrance of Kfar Gidon, almost a hundred meters from her house. Nachami Bohbot, who grew up in Kfar Gidon, remembers that when, as a ten-year-old child, she would visit Chaya Sara, the 60-year-old Rebbetzin would escort her half way home.

Miriam, their adopted daughter, alludes to a verse in Psalms in order to describe the Kramers' mode of giving: "All day long he sympathizes and lends..." She asks the obvious question, "Is the tzaddik [holy person] so wealthy that he can lend money to others all day long? No! The meaning of the verse is: All day long he lends his time to others. This was the way of Rabbi Yaakov Moshe and the Rebbetzin. They always listened to others."

Once, during the period she lived in Jerusalem, Chaya Sara received a phone call from a deeply depressed woman. Chaya Sara spoke with this woman for nine hours straight, without a break, until she had succeeded in dissipating the woman's despair.

The Kramers' hospitality was a fruit that grew from the branch of their generosity. They were generous with their material resources, with their time, with their respect, and with their love. Their faucet was always turned on --full blast.

HOW TO BECOME CLOSE TO GOD

Jews aspire to be close to God, but what does that mean? As Rabbi Leib Kelemen teaches: "Closeness in the physical world is measured by inches; closeness in the spiritual world is measured by similarity." If we want to be close to God, we must be similar to God. God's primary observable attribute is His generosity. The entire universe is the product of His giving.

If we want to be close to God, we must be similar to God.

I always considered myself a generous person, until I started researching the life of Chaya Sara Kramer and discovered what true generosity is. I had always been generous with my money, but stingy with my time. I always had room at my Shabbos table for people I liked, but not for people who rubbed me the wrong way. I always offered drinks to visitors, but not the chocolate chip cookies I was saving for myself. I always showed honor to people who are smart, interesting, and well-spoken, but had little patience for people I considered tiresome and boring. The more I have immersed myself in the example of Rebbetzin Chaya Sara, the more I use as the litmus test of my life's choices the question, "What would Rebbetzin Chaya Sara have done?"

And now an opportunity to become a giver presents itself to all of us who have been inspired by Rebbetzin Chaya Sara's example. Her second yahrzeit [anniversary of her passing] is approaching on Sunday, May 20 [starting the night before]. We can all give back to her by lighting a memorial candle for "Chaya Sara the daughter of Mendel Yosef" on Saturday night [after Shabbat] and by giving charity in her name on Sunday. Such actions give a spiritual boost to the soul in the world she now occupies.

Although she was never blessed with children, may her memory be perpetuated by all of us who decide to become her spiritual children.

Based on Holy Woman: The Road to Greatness of Rebbetzin Chaya Sara Kramer.

Principles of the Soul: #8 - Your Soul and Your Soulmate

5 Essential Ways to Make Room for Change and Move Forward