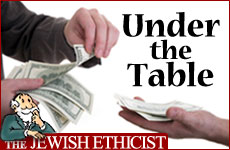 Should I register my protest and give it to my friend's boss?

Q. My friend's employer pays her "under the table," without paying employer taxes. I would like to protest their behavior, but I'm afraid it will cost my friend her job.

A. There is definitely a place for protesting improper behavior, but we also need to examine the boundaries of this ethical imperative.

Certainly it is improper to cheat on your taxes. Employer taxes are an equitable tax with a well-defined public interest, and there is no excuse for evading them. The Talmud tells us that communities have the authority to make and enforce public regulations for the good of all. (1) The Shulchan Arukh (authoritative code of Jewish law) explicitly mentions the obligation to pay taxes to any legitimate government.(2)

At the same time, it is clear that the Torah does not idealize a busy-body society, with each individual constantly harping on the behavior of his neighbors. So the ethical obligations mentioned come with various checks and balances.

While gentle rebuke is a mitzvah, our rabbis recognized that not everyone is adept at fulfilling it. Notice how the Torah carefully wraps the threatening part of the mitzvah -- "Surely rebuke your fellow" -- in admonitions to maintain positive relations: the verse begins "Don't despise your brother in your heart" and ends "don't bear sin towards him." It's not a coincidence that the only person in ancient royal courts who was able to publicly criticize the king was the court jester; a special talent and often a sense of humor is necessary to rebuke someone without engendering resentment or spite. In Jewish communities throughout the ages, public rebuke has been given through itinerant speakers, or "maggidim", who are experts in delivering their critical message in gentle parables and humorous stories.

Another relevant obligation here is the prohibition on believing slander. In Jewish law, it is not only forbidden to speak slander; it also forbids us to give full credence to such tales, as the Torah tells us "Don't bear a vain rumor" (Exodus 23:1). (4) This obligation also follows from the obligation to judge others favorably: "Judge your fellow with righteousness" (Leviticus 19:15), which again means not only to judge rightly, but also to give others the benefit of the doubt, as they are innocent until proven guilty. (5)

You don't have to assume your friend is spreading lies about the employer, but at the same time there are many ways to give the employer the benefit of the doubt. Perhaps your friend is not fully aware of all the payments made by her employer; perhaps there is a liquidity crisis and the employer fully intends to pay his full tax debt when he is able.

In this case there is an additional problem you mention: if you complain to the owner he will probably suspect that the information came from his employee and this may endanger her livelihood. In the end your rebuke, however justified, may cause more harm than good and, in particular, cause your friend unjustified harm.

A constructive way of reacting to this problem would be to educate others in the ethical and practical importance of paying their taxes promptly, thus making a fair contribution to the general welfare and avoiding legal complications. Perhaps people are unaware of their obligation, or fear that it is more onerous than it really is. Giving reproof to others is often called for, but in this case the knowledge of wrongdoing is so tenuous and the potential for harm so great that education is probably the more constructive path.

The Jewish Ethicist: Trolls and Ogres