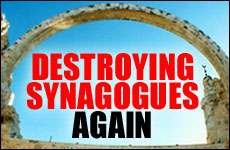 Israel respects and protects the holy places of other religions. Why can't the same be said of the Arabs?

The Synagogue of Rabbi Yehuda HaHasid – familiarly known as the Hurva – was the central Ashkenazi synagogue of Jerusalem. The largest and most magnificent synagogue in the Middle East, it took eight years to build. Its grandiose dome, standing some eight stories high, dwarfed all the other structures of the Old City's Jewish Quarter.

Baron Alphonse de Rothschild laid the foundation stone in 1858, after decades of various Jews' trying to obtain permission to build from the Ottoman (Turkish) Muslim authorities. When Sultan Abdul Mejid finally conceded, the firman [royal decree] he issued stated: "It is self-evident that justice and generosity alike enjoin that complete peace be assured to members of all faiths and religions dwelling in my sublime kingdom." 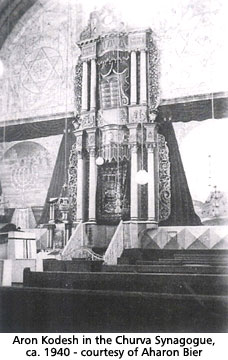 The synagogue's splendor dazzled everyone who entered. The Holy Ark, commissioned from a Polish artisan, stood two stories high. Its Baroque wood carvings of birds and flowers were set against four Corinthian columns. The ark contained dozens of Torah scrolls.

The 12 stained-glass windows in the dome represented the 12 tribes of Israel. The dome itself was painted sky-blue and strewn with golden stars. Frescos with religious motifs adorned every wall. Numerous crystal chandeliers hung from the dome.*

The Hurva provided the setting for all the grand occasions of the Jewish community. Here the Ashkenazi Chief Rabbis were inaugurated. Here the representatives of the Ottoman, and later the British, government paid their respects to the Jewish community. Here the banners of the Jewish Battalions of World War I were kept. And here Lord Herbert Samuel, the first Lord High Commissioner of the British Mandate and himself a Jew, was called to the Torah on Shabbat Nachamu in 1920, a historic event that, for many Jews, heralded the beginning of a more benign rule after centuries of low-level persecution under the Ottomans.

Puah Shteiner's childhood reminiscences of the Hurva give us a glimpse of how it dominated not only the Jewish Quarter's skyline, but also the hearts of its Jews:

From all directions people flocked to the Hurva Synagogue... As soon as we took our places on the carved wooden benches, I tried to count the chandeliers hanging from the ceiling, but without much success. How big and beautiful they were, the pieces of crystal glass glittering amidst the great light!

[I once asked my father,] "Abba, tell me, when the Temple is rebuilt, will it be as beautiful as the Hurva?"

During the first weeks of the War of Independence, on May 27, 1948, the Arab Legion [Jordanian army] captured the Hurva. They flew the flag of the Arab Legion from the Hurva's 24-meter-high dome and then proceeded to place a bomb at the top of the dome and blow it up.

The Arab Legion and the local Arabs proceeded to destroy or desecrate all of the Jewish Quarter's 58 synagogues.

The remnant of the Old City's Jewish residents and fighters, who had held out valiantly under siege for two weeks, wired a final telegram: "THE BREAD IS USED UP. THE HURVA IS BLOWN UP." The next day, vanquished emotionally as much as militarily, the Jews surrendered.

The Arab Legion and the local Arabs proceeded to destroy or desecrate all of the Jewish Quarter's 58 synagogues. Those that remained standing were used as garbage dumps, donkey stables, and public toilets. The victorious Jordanian government also vandalized the ancient Jewish cemetery on the Mount of Olives, ripping out three-quarters of its tombstones and using them to pave roads and for the floors of latrines.

Today, the ruins of the Hurva, some two blocks from my house, stand as a constant reminder of our history. After the Old City was liberated in 1967, the Israeli government constructed a stone arch between two stunted corners of the once-majestic structure to give tourists some idea of the mammoth size of the synagogue.

Of course, like all Jewish Quarter residents, I knew that the Hurva, which had never been used as a base of military operations by the Jews, had been destroyed for no military or strategic purpose, but simply out of hatred. I was quite surprised, however, when my husband gave me the gift of a photographic history of the Old City, For the Sake of Jerusalem. 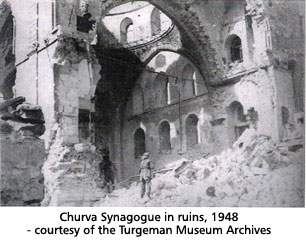 On page 72, I spied a photograph that horrified me: a picture of the Hurva from 1948, with a uniformed Arab standing on a pile of rubble. The dome and one wall had been destroyed, but the rest of the synagogue is standing! Intact, high walls with three levels of beautiful arched windows are clearly visible.

This means that the Hurva was not blown up in a single act of fury and passion while the battle still raged. It was dynamited after every single Jew had been expelled from the Old City. It was destroyed methodically, with planning, precision, and great difficulty, piece by giant piece.

The Hurva was not destroyed because it was "a symbol of the occupation," the excuse the Arabs are giving for the destruction of the synagogues of Gush Katif.

The Hurva was not destroyed because, as P.A. Chairman Mahmoud Abbas said, justifying the current destruction, "They left empty buildings that used to be temples, but they removed all the religious symbols, and they are no longer religious places."

The Hurva was not destroyed because of the pent-up anger and desperation of people living "under occupation."

The Hurva was destroyed because the minds and hearts of the Arabs grant no place for any other people or any other religion in what they consider their domain. This is as true today as it was in 1948.

It is 38 years since Israel regained sovereignty over the Old City. Next door to my house on the border of the Jewish and Armenian-Christian Quarters is a functioning mosque. Next to that is an ancient church belonging to the Assyrian Orthodox Church, Arab Christians who were persecuted and driven out of Iraq. The muezzin's call to prayer and the church bells wake us up at dawn, but there's no use complaining, because their rights are guaranteed by Israel's religious tolerance.

In the middle of the Jewish Quarter, a few meters from the ruins of the Hurva, stands a 15th century mosque. By the 18th century, the mosque had ceased functioning and fallen into disrepair since no Muslims lived in the vicinity. After Israel captured the Old City in 1967, rather than destroying the mosque (using Abu Mazen's justification that it was an empty building no longer in use), the government of Israel paid to renovate the mosque.

The government of Israel's official response to the burning of the Gaza synagogues was to send police forces to protect Israel's mosques from possible revenge attacks by extremist Jews.

While they are destroying our synagogues, we are protecting their mosques.

*This description is from For the Sake of Jerusalem by Aharon Bier, translated and expanded upon by Bracha Slae. Thanks to tour guide Rebbetzin Bracha Slae (9722-628-0755) for additional details about the Hurva.