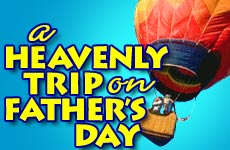 I couldn't wait to dangle at the small end of a hot air balloon over an African meadow without a doctor or ambulance beneath me.

What was a bar mitzvah teacher like me doing in an equatorial veldt in the middle of Kenya 3,000 miles away from a decent kosher deli?

But a dutiful father has to wave goodbye to bar mitzvah students and the comforts of home when his son needs him. My son, the salesman, had called. "Hey, Pop," he said, "I've won this great safari trip to Kenya. Courtesy of my company."

"That's wonderful," I replied. "Don't bring me back a poor, dead leopard skin coat. I'd rather have a fifth of Scotch from the duty-free shop in Nairobi."

"No, no," said the prizewinner and future CEO of his corporation. (This is a kid who could sell mezuzahs in Damascus.) "I want you to go. Jennifer's pregnant, you know, and I get to take a guest. I need you. Besides, it's June -- Father's Day is coming."

At that moment I looked up from the phone and somehow my mind printed on the den's white wall like a movie screen, in large, block letters the word "FREE???" Just like that -- with all three question marks. I didn't say a word, but this talented youth with whom I have a close, almost extra-sensory relationship said, "Sure, Pop, it's FREE."

But I had planned a busy month including a lot of naps. And the Greenberg kid, with a head full of feathers, was due up at the bar mitzvah plate in two months. Besides, I wanted to check out the June bargains at Walmart (you don't want to miss one of those $3.98 shirt specials). However, I yielded to the child's needs and a FREE safari -- like one of those fancy schmancy intercontinental bar mitzvahs I'd never been invited to -- because all my friends were poor. And that's why I was in a Kenyan meadow with a bunch of pale, white tourists and four dead balloons stretched out on the veldt, like giant stuffed kishkes they forgot to stuff.

Each balloon keeper assembled his twelve passengers around him and his dead kishke, for a brief set of do's and don'ts. Way up on the Don't list was "Don't fall out." He said this several times in several languages. "Don't look directly down" was also important. For the first time, that morning I began obsessing on the fact that I was ascending high in the air without benefit of motors or wings or a life of prayer.

So me and eleven other total idiots who were tired of living and had come 8,000 miles to die, clambered into the wicker baskets.

My mood was mixed. I'm sure that somewhere in my ancestral gene pool lurked Samsons, Maccabees, Israelite warriors, and explorers of the Negev. I couldn't wait to dangle at the small end of a hot air balloon over an African meadow without a doctor or ambulance beneath me. On the other hand, I get a little dizzy every time I step from my entry hall at home up to the raised floor of our living room.

But it was too late to flee. And where could you hide in that endless meadow. If the safari staff people didn't pull you out from under a bush, a bulimic lion would.

By now, huge fans were pumping hot air into the kishkes, which were restlessly stirring into life. Finally, they stood upright. So me and eleven other total idiots who were tired of living and had come 8,000 miles to die, clambered into the wicker baskets.

Up we went past the point of no return. I closed my eyes and hugged the fat guy next to me for the one-hour flight.

The hot air machine, manipulated by our pilot, made a terrible racket. And belched a torrent of invisible hot gas. You'd be intensely studying that herd of wildebeests beneath you wondering whether wildebeest chops were kosher -- whether they would be best with A-1 or catsup -- when he'd activate the noisemaker from hell and your teeth would rattle. I squeezed my soft security blanket even harder. Here, halfway to heaven, me and my pudgy pal held an ecumenical prayer service. I did three quick Shema's. He did something that began, "Hail Mary. . . . ," which must have been relaxing because he quit shaking.

Besides making sudden noises, our pilot loved to suddenly shoot up to 1000-1500 feet levels; from which height you couldn't tell a rhino from a gray Ford Explorer with a massive ivory hood ornament.

For an hour we cruised over the savannahs of Africa -- then thankfully our basket passionately kissed the ground. We climbed out in a flash and did the same. I said Shema again -- then jumped in the line to go up again.

6 Mindful Eating Tips for Your Body and Soul

Letting My Daughter Go
Saadiah Gaon, Rashi and Maimonides: How Three Rabbis Revolutionized Judaism
King Sennacherib and the Siege of Lachish
Three Small and Easy Changes to Add Positivity in Your Home
Comments