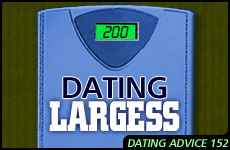 Okay, a few pounds overweight. What's all the fuss?

I live in a medium-size city with a decent pool of Jewish singles. The problem is that as I officially approach my "late 20s," I have realized that I am in a hopeless situation in my love life. The past two years have seen a marginal amount of fix ups that have never resulted in a second date. In fact I have often been in situations where I was introduced to someone, and have gotten this attitude that I was simply not worth spending a few minutes of polite conversation.

I meet Jewish men through a variety of singles and community events. I also meet others through friends or more casual social situations. My friends would describe me as smart, funny and creative. I am always told that I am a kind and caring person and that I am fun and easy to be around. You'd think that those qualities would help attract men, but they don't!

I think I know the reason. I would say that I am on the heavy side of average. I used to be much larger many years ago, but a thyroid condition was discovered and through medication and exercise I have been able to work myself down to a size 18 (from a 26). I take care of my hair, skin and makeup. I also make sure to dress attractively. Other than the larger size, I feel that I am pretty cute and put together.

What gets me is that I am rejected by men for something I cannot prevent. It hurts to know that most guys care more about what you look like on the outside than on the inside. I don't understand why a man who himself is not exactly all that fit or attractive feels he has the right to look at me or any other woman who is not perfect as if we are wasting his time by simply existing? I am active and energetic. My size doesn't limit my life and my goals. So many other things are going well in my career and friends.

I want more than anything to meet someone and have a family. I also know that I would make someone very happy one day. But they never give me a chance. I know of many men who lament their singlehood and wonder why they are single. But they behave in a way that says they'd rather be single than date someone imperfect.

Am I being paranoid? Is there a technique to perhaps deal with these obstacles? Is there a way to convince someone that they are not "settling" by dating someone who doesn't fit the mold of "perfect"?

You write about an issue that troubles us a great deal. In fact, we know many unmarried women who could have written your letter, and our hearts go out to you. You are in a great deal of pain, beginning to feel that you are running out of resources and hope. You are the reason why the two of us decided to devote so much of our energies into helping singles. We could not ignore the turmoil you are experiencing when we know that there are many avenues to achieving your goals of marriage that you have not yet explored.

All of us face different challenges that make it difficult for us to achieve our goals. Some face a chronic medical condition, physical handicap, learning disability, emotional illness, language barrier, difficult childhood, less-than-perfect social skills, or economic hardship -- while others who appear to have a "normal life" can't accomplish something they very much want because they lack that small, extra talent or ability to succeed. God didn't make any of us perfect, and the challenges some of us face may seem to be more difficult than those of out neighbor. Is this fair? No, but that's life.

We aren't going to tell you that you must lose weight in order to have a fulfilling social life. For many people, losing weight is very difficult, and we know that if it would have been easy for you to be slimmer, you would be. You appear to be doing the best to maximize your appearance and to feel good about yourself, which is something that all singles, and even married people, should do. In addition, the fact that you feel attractive is a big plus -- someone who likes herself and feels good about her appearance projects a positive outlook that is often contagious.

In spite of this, we cannot in all honesty tell you that you have the same opportunities as slim women to meet and be attractive to potential dating partners. Our society views thinness as beautiful, just as a Rubenesque figure was considered beautiful in the early 17th century. It is true that there will be a large percentage of men who will not want to go out with you because our society has conditioned them to be attracted to slimmer women. However, there are some very fine men who do not mind (and can be attracted to) a woman who is heavier than the ideal. They are just the minority.

Therefore, you are going to have to make that much more of an effort to find potential dating partners. Believe us, they are out there. Your larger size is not an insurmountable barrier to finding the man who is right for you. However, you will have to do a great deal of networking to meet suitable guys. Dating Maze #135 describes the networking process in great detail, and we suggest you review it for pointers. You cannot be shy about approaching people and asking them to help you. You have to be proactive.

We recommend that you pay special attention to one very important aspect of the networking process -- training others how to present you in the best way possible. Your friends should describe what a beautiful person you are -- personable, warm, fun to be with, caring, intelligent, and attractive. If they are asked to describe your physical appearance, we recommend that they do so in a positive way, letting potential dates know that you are an attractive, larger size woman.

We always encourage singles to take care of the way they look, since they never know who may introduce them to Mr. or Ms. Right because they made a good overall impression, and because people tend to radiate positive "vibes" when they feel good about the way they look. We especially believe that larger men and women have to be well-groomed all the time, because of prejudices our society has against heavier people. We do not like these prejudices any more than you do, but we cannot ignore the fact that they exist, and that people are more receptive to a well-groomed person who is heavy, than they are to a heavy person who is unkempt or wears unflattering clothing. And don't we want people to be receptive to getting to know the person we truly are?

We haven't yet mentioned using the Internet to find potential dating partners -- it has worked for many people. One of its advantages is that it gives two people the opportunity to learn a little about each other sight-unseen, so that they become interested in getting together. It's important for someone who uses the Internet to arrange for a face-to-face meeting early in the correspondence. Yet we know that the idea of a meeting sometimes terrifies heavier people, who are afraid their e-pal will be disappointed in their appearance. You can avoid surprises by using a very flattering, up-to-date photograph that will show that you aren't a slender woman. If your e-pal is only interested in slim women, it is better that he knows that you are not slim at an early point in your correspondence.

You wonder why men seem to be overly concerned about a woman's appearance, even if they themselves are less-than-ideal physical specimens. We know this is a generalization, but many men are first attracted physically, and then allow themselves to get to know the woman's inner qualities. Since there is frequently a strong visual element to the physical attraction, a man may never take the chance to know a woman who doesn't instantly appeal to him (and that is a shame, because physical attraction often grows as two people start to develop an emotional connection). On the other hand, many women become physically attracted to a man only after they begin to feel an emotional connection.

The bottom line is that people of all shapes and sizes fall in love and get married. There's a great man out there for you, and we hope that during your search for him you bear in mind that he's the only one you've got to find and attract... not the rest of the male population.

Dating Maze #250 - Something Is Off
Why Are The Prayers Of Yom Kipur So Repetetive?
Ha'azinu 5783: A Time for Unity!
Twisted Thinking
Comments