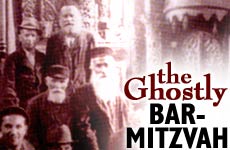 A tale about a father and son who plan a Bar Mitzvah celebration in a ravaged Polish village in 1946.

They tell the story of Jacob Zigowski and his son, Adam, who returned to their Polish village in early 1946 -- the only survivors of a family of mama and papa and six children. In fact, the only Jews of Riegle still alive.

One day, as Adam and his father sat over a supper of cheese, boiled cabbage and dark bread, the boy uncharacteristically began the suppertime conversation.

"In six months, on June 14th, I'll be 13. Should we not start my Bar Mitzvah training? Shouldn't we hire the tutor, Shimon Mendel from Warsaw -- if he's still alive -- to come and teach me to chant the Torah and Haftorah?"

"Adam, I think the God of Abraham, Isaac and Jacob has forgotten us. Eat your cheese."

His father laid down his knife and fork. His jaws ceased their chewing. He smiled at his son, but only to gain time to order his thoughts -- shocked by the idea of a Bar Mitzvah. A Bar Mitzvah, he thought? A Bar Mitzvah here in this lawless land; in this godless time where the Supreme Judge, Himself, had apparently broken his vows with his people Israel? A 24-hour repetition of the Kaddish would be more appropriate, followed by a funeral march around the town square. That would make sense, thought Jacob. But a Bar Mitzvah celebration? A tribute to the forgotten covenant? How stupid.

To the boy, he said, "Adam, I think the God of Abraham, Isaac and Jacob has forgotten us. Eat your cheese."

Over the following two weeks his persistence continued. Jacob had never heard such eloquence and passion from this child who had lost most of his childhood. So, finally he agreed. Yes, they'd bring Shimon, or some substitute if Shimon had fed the Nazi appetite for Jewish flesh. Yes, he'd come twice a week and Adam, like whole tribes of boys before him, would recite prayers of praise to God for illuminating us with the light of Torah. And he would read the dusty, tattered village Torah Scroll. It had survived the war in a peasant's barn, a far-sighted peasant who knew the Jews would pay well for it, if any of them remained.

"Who's going to come? Ghosts?"

Only a few weeks before the event did it occur to the Zigowski family -- father and son -- that theirs might be the first Bar Mitzvah without spectators. Except for one, of course, who would stare down in astonishment. "If God lived here, our remaining Polish Jews would throw stones at his house," Jacob often said during those months. "That is assuming that any Jewish stone throwers survived," he usually added.

Besides Adam and Jacob, the few remaining survivors in the district had scurried as far as possible from the fields and towns of sorrowful memories.

"So, who's going to come?" said the papa to the Bar Mitzvah boy. "Ghosts? Well, at least we'll save a bundle on the Kiddush. How much herring and cheese can they eat?"

"Great, we'll fill six seats in a 500-seat sanctuary. There'll be a bigger crowd watching the ice melt on the river."

"You forgot someone, Father," added the boy.

"Yeah, OK, He'll, maybe, be there, too," replied Jacob. "Maybe the reading of His Book will remind Him of His obligations."

The Bar Mitzvah day dawned as fresh as the first day of creation. It was Spring and the cornflowers in the meadows of Riegle celebrated with vivid blues and purples and pinks. The Bar Mitzvah boy, his father, and the tutor walked the few blocks from their house to the old wooden synagogue, unfrequented for years. Jacob took the key from his jacket pocket. It turned easily in its lock. With a loud click, the weathered door swung open.

A buzz of expectation flooded over them.

As they stepped in, a hum -- a buzz -- of expectation flooded over them. The pews were full. Not one empty seat. It was a crowd befitting a Bar Mitzvah of long ago, not the Bar Mitzvah of the only Jewish boy in Riegle in June of 1946.

The chandelier in the old shul blazed with an uncanny brilliance that could have lit the world in its blackest midnight. Down the center aisle, their cheeks shining with tears, walked Adam and his father. They waved exuberantly. They threw kisses. The Jewish community of Riegle and the God of Abraham, Isaac, and Jacob awaited the Bar Mitzvah of Adam Zigowski.

A Time to Sew, a Time to Rend

I Didn’t Think My Mother would Die from Covid-19

My Best, Hard-Earned Advice for Caregivers
Where Are We? The Body, Brain, Soul Problem
Dr. Sheila Nazarian’s Escape from Iran
The Miami Boys Choir is Taking over TikTok
Comments
MOST POPULAR IN Family
Our privacy policy
Aish.com Is Looking for Great Writers