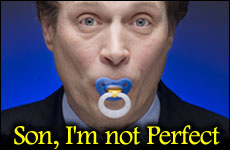 A letter to my 14 year old son, revealing something he might find shocking.

Children often think their parents are perfect. I know you idolize me -- and I love that about you. It's one of your best features. Don't ever lose it. But there really is no such thing as a perfect parent, despite how "cool" you think it might be to be me, or to, say, have Tom Cruise as your dad. Believe me, Tom's fame and money and jet-setting life would eventually prove to be a poor substitute for the character-building struggling and uncertainty about your future that your own parents so lovingly and selflessly offer. Besides, we Jews have a long, long history of suffering; you're a part now of that proud tradition. Tom could never offer you that.

Despite their imperfections, one of the most valuable things parents can provide, aside from a complete set of "South Park" DVDs, is the benefit of their experience. Parents can inform their children of the mistakes they've made, in hopes that their children won't repeat them. Which is not to say that children won't go on anyway and make their own, different, perhaps even more serious mistakes. And for these very special children, there is something I'll cover in a later section called juvenile court.

I myself have made hundreds of mistakes in my life, and continue to make them on a regular basis. How lucky you are to have a parent with a Ph.D. in Messing Up. If you had had the misfortune of having a more together, more competent role model, you'd have no idea what not to do. You'd be lost in a sea of correct choices, financial security, and parental figures who are the envy of your classmates. And that just leads to getting beaten up on the playground.

Instead, you have me. And despite your envisioning me up there practically on the same level as Homer Simpson, I'm just a man. Or, as your mother refers to me, a deeply flawed and troubled man. But perhaps she's saying that somewhat jokingly. If you get the chance, ask her, won't you? And report back. But be discreet. And make small talk first. In any case, I just wanted to share some of the mistakes I've made during my lifetime, in hopes that your life will turn out better. After all, just because my life has been described, and by my own mother I might add, as "a spiraling descent into a nightmarish swamp of mediocrity and horror," doesn't mean yours won't turn out to be a really swell time.

One of the earliest mistakes I can remember was humming in class, while the teacher was talking. This, I now understand, is rude. Naturally, she got angry and asked me to be quiet. I stopped humming, she resumed talking, but then a little voice inside my head told me, "Psssst! Hey -- she said 'no humming;' she didn't say anything about whistling." Did I question the voice's logic? Au contraire! I began whistling, and was propelled to the principal's office at a velocity approaching that of the speed of light. Lesson #1: Sometimes the little voice inside your head is just goofing with you. Feel free to ignore it.

My mistakes were by no means limited to the school arena. At home, refusing to eat anything even vaguely smacking of health, my parents made me sit at the kitchen table, until midnight, if necessary, until my liver and broccoli were eaten. Problem? Not when you have a dog that is hungry 25 hours a day. I snuck Lizzie the foul stuff under the table. Consequently, I grew up with Woody Allen's physique, while Lizzie holds several trophies for Canine Competitive Weight Lifting and can bench-press a 50-lb. sack of Alpo without breaking a sweat.

Even if you are mistake-free in the school and home arenas, there is still always the possibility of messing up while visiting a relative. I learned never to tell a great-grandmother, "Mom says when the old biddy kicks off, we'll be rich." Nor will the announcement, "We ate before we came, because dad says your cooking can be found in the dictionary under 'P,' for punishment," gain you many points. Finally, never hide in grandma's room to spy on her and call out, "Oh, gross!" while she brushes her teeth. In a cup.

Never be so cocky as to refuse to ask directions to your meeting in Boston, even if all road signs indicate that you are driving through "Scenic Nebraska."

Eventually, you will find yourself applying for a job, unless you are as lucky as I was in having been recruited directly from college to do customer service work for a loan shark. Always be honest on your resume, because it will catch up with you. The one time I tried embellishing my actual experience and accomplishments, someone nearly lost his life when it was discovered that the sum total of my knowledge of brain surgery consisted of having watched a particularly intense episode of "E.R."

Driving in traffic can be a rich opportunity for mistakes. Never cut off a pick-up truck that has a Confederate flag, a gun rack, and two men who appear to have been bitter and resentful ever since losing out on roles as extras in "Deliverance." Nor ask them when they catch up with you, "Say, you fellas Jewish by any chance?" And never be so cocky as to refuse to ask directions to your meeting in Boston, even if all road signs indicate that you are driving through "Scenic Nebraska."

Strangely enough, I think I've made the most mistakes in life, in dealing with myself -- the little lies I tell me, to rationalize behavior: "This Diet Coke should neutralize the calories in the Triple-Cheese Pizza." "Fifteen different credit cards with small balances are much more sensible than one credit card with a large balance." "Iraq has never had a Jewish deli – so, yes, I will invest!"

I guess what I'm trying to say, Joey, is that life offers a cornucopia of opportunities to make bad choices, to do the wrong thing. If it didn't, all the news stations and tabloids would be out of business, TV shows and movies would be far less interesting, and Jerry Springer wouldn't have a career.

The important thing is to carefully consider everything you do, and celebrate the good choices. The one good choice I know I made was bringing you into the world. So good that it no doubt wipes out this other really bad thing I did in Mexico, which I'll tell you about when you're a little older. Because I don't want to disillusion you just yet. So although you now know I'm flawed, you have my permission, if you like, to keep thinking of me as god-like, at least for a while. Who knows? Perhaps it'll do us both some good.

As The Tsouris Turns
The Softball Player
How This 6 Generation Bread Baker Brought Back Israel’s Ancient Grains
Olivia Newton John’s Grandfather was a Nobel-Prize Winning Jewish Physicist
Comments
MOST POPULAR IN Jewlarious
Our privacy policy
Aish.com Is Looking for Great Writers