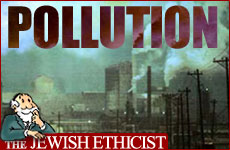 Q. Does Jewish law forbid pollution? Does the polluter have to pay damages, like anyone else who causes harm?

A.Among the very first commandments given in the Torah are those providing for payments for damages. In chapter 20 of the book of Exodus we have the revelation on Mount Sinai and the Ten Commandments, and in the very next chapter we find the nuts and bolts of damages for battery, damages caused by animals, and so on.

However, generally the torts described in the Torah are very direct and severe; they don't much resemble the more diffuse and moderate damage caused by pollution. In order to deal with this type of problem, the Mishnah and Talmud provide a much different kind of damage regime, known as nizkei shechenim or "damages among neighbors". Whereas the first kind of damages is discussed in the tractate Bava Kamma ("first gate"), the second kind is discussed in the tractate Bava Batra ("last gate".) This tractate provides a very thorough and profound analysis of pollution regulation, including air pollution, noise pollution, crowding and so on.

The model of human relations underlying this regime is much different than the one underlying classic damages. Classic damage law starts from the assumption of an atomistic society, where each person has his own private property and occupation. Then the main danger is some kind of acute damage done by one person to another.

But the laws of neighbors, as the name suggests, start from a much more advanced model of society, one in which people's main concern is not to have their fellow man leave them unharmed but rather in which the community works together to advance the common interest. Now the demand is not for autonomy but for cooperation. We can see this from the very beginnings of these tractates. The first phrase in Bava Kamma is "There are four kinds of damage," but tractate Bava Batra opens "Neighbors who want to build a partition." Here we are talking about neighbors who already have common desires and need to regulate the ways to realize these desires. Likewise, from the names of the tractates we get the impression that the beginning (first gate) of ethical human relations is to do no harm, but the end or objective (last gate) is to foster communal action and cooperation.

This evolution from isolation to cooperation is a general trend in Jewish law. The Bible tells us that in the time of King Solomon, "And in Judea and Israel each man sat securely under his vine and under his fig-tree from Dan [in the far North] to Beer Sheva [in the far South] all the days of Solomon." (I Kings 5:5.) This is often considered the description of an idyllic perfect existence. But as I explain in my book Meaning in Mitzvot (chapter 94), there is evidence that King Solomon didn't view it this way. Some of the decrees the Talmud attributes to King Solomon can be explained as a means to create a greater degree of solidarity and community among the people so that they could truly benefit from the physical security of Solomon's reign.

A corollary of this approach is that pollution restriction is not structured around strict prohibitions, but rather around a regulatory approach in which the community establishes guidelines for what kinds of nuisances are tolerated in order not to interfere with business activity and normal lifestyle activities, and what kinds are excessive in their danger and disturbance to others. For example, the great 16th century authority Rabbi Shlomo Cohen was asked to rule on pollution caused by the dyeing industry in his city; he agreed that the pollution was a significant nuisance but he concluded that this needed to be weighed against the great importance of this industry in the city's economy. (1) This kind of thinking is characteristic of the "laws of neighbors" which regulate activity taking into account the entire range of considerations of communal welfare.

In some cases the sanctions for pollution may involve monetary damages, as in an ordinary tort; in other cases the demand may be merely to desist, or to act to repair the damage. The variety of responses is a consequence of the communal and consensual framework for these laws.

Pollution control is a very important and ancient priority in Jewish law and tradition. We find that detailed regulations to regulate nuisances were in place close to two thousand years ago. The framework for these laws is not the classic tort understanding of A who harms B, but rather of a democratic communal decision regarding the appropriate weight of the harm wrought by pollution as against the expense involved in preventing it.

The Jewish Ethicist - Public Service or Public Relations?
For Every Individual, A Torah Scroll
Allegiance To The Monarch
Meet the Real You: Yom Kippur
Comments
MOST POPULAR IN Current Issues
Our privacy policy
Aish.com Is Looking for Great Writers