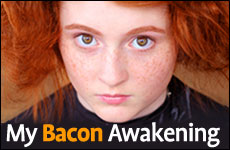 I was raised a "traditional" Jew. Here's why I gave it up.

"She looks like a shikse," people told my mom when I was three years old. "Do you dye her hair blonde?"

I didn't look Jewish when I grew older, either, but that didn't faze me. I took my religion for granted, like the freckles on my nose that I didn't necessarily love but accepted as part of my skin.

Half my elementary school was Jewish but none of us had a clue what being Jewish really meant.

I grew up on a 1970s South African brand of Jewish tradition. Half my elementary school was Jewish but none of us had a clue what being Jewish really meant. I knew I wasn't the same as Patrick Nichols in the seat next to me, but that was about it.

At Passover time, the classroom buzzed with the novelty of matzah-and-peanut-butter sandwiches. "Tradition" dictated that on the Jewish holidays we take off school, although none of us went to shul. Those who did spent most of the time socializing outside, anyway. "Tradition" demanded that we fast on Yom Kippur. So for weeks before, I'd collect piles of comics with my best friend, and shlepp them to the park where we'd spend the day, swapping junk literature for food and drink.

We were "traditional Jews," Ma always said. Nothing to do with religion, I should understand. She lit candles on Friday nights and we went to shul on Rosh Hashana. "Once-a-Year Jews," my friend Jason said, which made my skin itch. Jason thought himself more traditional than me because they kept a kosher home. But they 'ate out' at non-kosher restaurants, which made them hypocrites as far as I was concerned.

Dad had strong opinions about the difference between religion, which he didn't like, and tradition, which he did. "A bris has nothing to do with religion," he said. "It's tradition!" My mother said being Jewish was "in the blood." But I never quite got the secret ingredient.

One Christmas morning when I was eight, as we filled up Dad's Ford Fairlane at the gas station, Jingle Bells blared on the radio. I jumped out of the car and proclaimed to the attendant and everyone else who'd listen, "We're Jewish. We don't have Christmas!"

"Shhhhh!" Ma hushed me up and shuffled me back into the car. Why did our Jewishness need to be hushed up? Didn't Ma and Dad always say they were proud to be Jews? Maybe what we had "in the blood" wasn't so kosher after all.

In seventh grade, my class took a trip to South Africa's Natal coast, about 14 hours away (school bus time). I had never slept away from home for a whole week. On the last morning, they served bacon and eggs. Pork was strictly off limits in my family. My friends were eating their fill. What harm could it do -- just this once?

But as the bus jostled us back home to Jo'burg, my main concern was less about the pork I had put into my mouth, and more about what would come out of my mouth when Ma asked the question I just knew she'd ask.

I planned my strategy. I would deftly veer us off course -- tell her about the monkeys we saw on our trip to the zoo. Ma thought monkeys were cute. She was bound to get sidetracked and that would be that.

The following Monday, on the way to ballet, I sat in the back seat of the car, tying the satin ribbons of my shoes.

"So, what did you eat for breakfast on Friday morning?" Ma asked as we drove past The Doll's House -- the drive-in takeaway from which we often ordered hamburgers with vanilla milkshakes.

I was ready. "Ma, did I tell you about the monkeys we saw in the zoo?" There was an awful silence as the words trailed off into the hum of the engine.

"What did you have for breakfast?"

For a moment, the car, the air, everything, seemed frozen in time. Then she jerked her head sideways and hurled the words at me. "JEWS DON'T EAT PORK!"

Tears stung my eyes. Something swirled in my stomach and raged down my legs. I bit my lip and said nothing. Right! And Jews also don't eat prawns or lobsters or crayfish! So what about all the seafood restaurants we go to on Saturday nights, hey Ma? And what about rump steak and Tornado Highwayman with cheese sauce, hey?

I was full of righteous indignation. But I kept quiet. I could simply have said, "We ate eggs on toast, Ma." It wouldn't have been a complete lie. I guess somewhere inside my belief system, telling the truth cut deeper than tradition.

But the bacon episode convinced me that our way was as hypocritical as Jason's. Say one thing, do something else. And criticize others when the wrong things you do are different from the wrong things they do.

When I became a teen, I made sure I had nothing to do with hypocrisy.

"Do you have spare ribs?" I'd ask the restaurant's waiter.

"We have both beef and pork."

Then one night, I had a date with Larry. The unwritten rules of Jewish dating in Jo'burg dictated a movie, followed by coffee in your home, whether you enjoyed his company or not. I poured boiling water into our cups as we sat in the square armchairs around Ma's glass coffee table. Larry selected a chocolate chip cookie as we drifted into a discussion about being Jewish. That perked him up.

"You know, it's written in the Torah that we mustn't eat pig."

This was unexpected. I put my cup down. "Really?"

God? The word reverberated through me like a lightning bolt. I believed God existed because I'd sensed Him shaking His great, gray head when I was chutzpadik to Ma. I knew He was up there somewhere taking notes, though I wouldn't say we had a working relationship. Certainly, He'd never interfered with what I ate!

I stared at Larry as my palms slid back and forth along the upholstery. And I recalled that day in Ma's car, years back. If Larry had said, "How could you!" or "Jews don't..." or anything that smacked of tradition, I would probably have reacted the same way I had to my mother.

This was different. God was Authority, whereas, to my mind, tradition was what different parents made up to keep their kids from assimilating.

But this was different. God was Authority, whereas, to my mind, tradition was what different parents made up to keep their kids from assimilating.

I always sensed that I wasn't getting the full picture. By introducing the element of God, Larry prompted me to re-examine my entire attitude toward Judaism. Was it possible that Judaism has a holistic, internally consistent ideology, resting on the foundation of belief in God?

After that night, I ordered beef spare ribs in steak houses. But in fish restaurants, I still ate prawns with lemon and butter sauce. Was I any different from those I labeled ‘hypocrites'?

Then one day, an ad on the neighborhood billboard caught my eye. It advertised a Torah lecture, entitled, Faith or Fraud: The Truth about Hypocrisy.

I made sure to sit in the front row.

"Many people think you're a hypocrite if you only keep some of the mitzvot," the rabbi said.

"This is a mistake."

"You're a hypocrite if you pretend to be something you're not," he continued. "For instance, if you present yourself as more religious than the Pope, but then you short-change someone in a business deal -- that's hypocrisy."

"Let's say you know that your ear will be stuck to the phone all day Saturday, but you undertake to refrain from phone calls on Friday night. I cannot tell you that it's okay to talk on the phone on Shabbat. It isn't. But Judaism isn't all or nothing. Any mitzvah you take on is valid, and on one level, not talking Friday night is an enormous step in the right direction."

The rabbi continued: "You're not a hypocrite if you can't take on the whole Torah all at once. The Torah wasn't given to angels; it was given to human beings who are works in progress, filled with inconsistencies. Find something small you know you can stick to. And once you've got that step nailed, make sure you take another step. Every movement toward God is precious growth."

This was the missing piece of the puzzle. Tradition can be a good starting point. But tradition alone is not enough to effectively transmit to the next generation.

I left the class resolved to find something small. Maybe I could never do it all. But the main thing was never to stop growing, never to stop climbing higher.

It didn't bother me that someone might call me a hypocrite. I'd simply tell them that I'd given up the ideology of ‘tradition'.

Malka Shain is a published author who lives near Jerusalem, teaches English, and holds a PhD in literature.

The Human Touch
For Every Individual, A Torah Scroll
Allegiance To The Monarch
Meet the Real You: Yom Kippur
Comments
MOST POPULAR IN Spirituality
Our privacy policy
Aish.com Is Looking for Great Writers