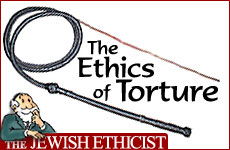 The duty of rescue and the right to self-defense.

Q. What does Judaism say about torturing suspects in order to obtain life-saving information?

A. This highly topical question is the subject of a recent article by Rabbi J. David Bleich in the latest issue of Tradition magazine, devoted to the topic of "War and the Jewish Tradition". This column is basically a summary and brief commentary on Rabbi Bleich's analysis, rather than an original approach to this complex issue.

Rabbi Bleich adopts what seems to me an entirely novel ethical approach to the torture issue, based on two concepts of particular importance in Jewish law: the duty of rescue, and the right to self-defense.

In the European and Anglo-Saxon legal traditions, the duty of rescue is very limited. Rabbi Bleich writes that very few jurisdictions impose any sanctions at all on someone who is able to rescue but fails to do so. Many reasons have been suggested for this omission. One is that sanctions could be counterproductive by encouraging people to remain far from the site of disaster so that they could not be punished for not rescuing; when there are a number of potential rescuers there is a difficulty in singling out whom the duty falls on; and so on. Perhaps the biggest obstacle is the orientation of European law towards rights and punishments as opposed to affirmative duties.

By contrast, Jewish law imposes a binding and very demanding level of obligation to help others when their well-being or even their property is in danger. The Torah commands us, "Don't stand idly by the blood of your fellow" (Leviticus 19:16); rather, we are obligated to take affirmative action to help him.

Jewish law, like other legal systems, recognizes the right to self-defense. Harming another person is of course normally forbidden, but when that person threatens us we are allowed to act aggressively to protect ourselves. A critical question here is, what is the ethical justification for this right? Is it self-defense per se or is it the culpability of the attacker? Rabbi Bleich explains that in Jewish law, a person may be considered a "pursuer" even if they have no culpability. For example, if the mother's life is threatened during childbirth, the emerging infant can be endangered to save her even though he or she obviously bears no culpability for the tragic medical situation.

Putting these two principles together, Rabbi Bleich concludes that any person with life-saving information is obligated to reveal it (duty of rescue), and that the right of self-defense would justify aggressive actions to compel the knower to disclose his information. Rabbi Bleich writes: "By failing to act the potential informant makes it possible for a calamity to occur. . . It is thus clear that the law of pursuit sanctions any form of bodily force, including mayhem, when necessary to preserve the life of the victim."

As Rabbi Bleich points out, this analysis applies fully only when there is certainty that the person in question can and will provide the information needed to defuse a "ticking bomb". Uncertainty can arise here in many guises: is there a threat at all? Does this person indeed possess the information needed to neutralize the threat? And will torture be effective in eliciting the information? (Rabbi Bleich makes it clear that torture can never be sanctioned when less painful methods will be fruitful.) Obviously these are serious doubts, and experts are divided on whether torture is generally an effective means of obtaining information at all.

Another reservation here is that we have to clearly establish the informant's duty to disclose. Since his status as a "pursuer" is due to his passive refusal to reveal information he has, there can be no right to harm him if he has valid reasons for keeping his secret. Rabbi Bleich devotes some discussion to this complex angle.

I want to comment briefly on Rabbi Bleich's analysis. The "ticking bomb" scenario is a well-known ethical dilemma, and Rabbi Bleich's approach is quite different than the usual ones. In a "duty ethics" approach, some acts are considered absolute wrongs. Either they can never be sanctioned, or can only be sanctioned in the presence of a higher duty. So we would either prohibit torture categorically, or else weigh its harm against the interrogator's ethical duty of rescue. In a "consequentialist ethics" approach, the question is more quantifiable: does the benefit to the potential victims outweigh the suffering of the informant as well as the potential for ethical deterioration if torture becomes commonplace?

According to Rabbi Bleich, in Jewish law the hinge of the argument is the obligation of the informant himself to help others. In this surprising fashion, the sanction for torture becomes an expression of his humanity, rather than of his inhumanity. We are allowed to cause him pain precisely because we insist, despite his enmity, on viewing him as someone who has his own ethical obligations to his fellow human beings. This seems to me an innovative and ly humane way of looking at this challenging ethical dilemma.

The Jewish Ethicist: Grease or Graft

The Jewish Ethicist: Avoid or Advise?

The Jewish Ethicist: Keeping Your Computer Holy
What Makes Eli Run?
The Tyranny of Materialism
Science Enters the Mysterious Inner World of Consciousness
Comments
MOST POPULAR IN Current Issues
Our privacy policy