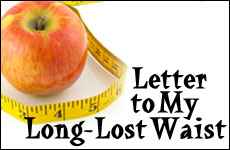 Please come back to me. I miss you terribly.

I know it's been a long time since we've seen each other, and things were strained between us when you finally left for leaner pastures. But I am not too proud to admit that I (and several articles of clothing in my closet) still miss you desperately. Perhaps I should have seen the warning signs earlier that you were slipping away from me, one belt loop at a time. With every piece of rugalech and slice of potato kugel, I must have been pushing you away from me. But must we be like so many other modern relationships, transient and shallow? Can we not begin again?

Admit it: we used to be a great team. Thanks to you, I smugly cinched belts to a satisfying close, even without having to mortify myself through torturous sit-ups five times a week. At parties, you were an asset more valuable than a raconteur's storehouse of witty repartee. Do you remember my dazzling turquoise jumpsuit, worn to so many summer soirees back in the days of Big Shoulders? Admiring males nearly spilled their beers when I sauntered by in brilliant blue on the way to the buffet table. Back then, I was heedless of those vile four-letter words, such as "carb" and "cake." Whenever I recall that jumpsuit (every Tuesday at 10 a.m.), wondering if I could ever fit into it again, I fight back tears while the immortal words of Edgar Allen Poe echo darkly: "The sad answer, ‘Never– Nevermore.'"

Without you, I am left quietly waiting for a consultation in the women's lingerie department, trying to select from a dizzying array of latex body armor. Naturally, you won't be familiar with these inventions, all variations on sausage casings. Even with a consult, it's not easy choosing among mummifying garments such as the Lardy Liquidator, Adios Adipose, the Endormorph Annihilator, the Tubby Torpedo, and the Roly-Poly Rub Out.

These modern versions of chain mail are astonishing feats of engineering. The U.S. military is snapping them up by the thousands, not because our servicemen and women are plumping out, but because these body huggers have built in missile defense capabilities. (Take that, Vladimir!) But nothing is perfect. Because breathing is constricted with some of these garments, especially the Extreme Titanium Torso Nipper, oxygen tanks are a must-have accessory.

Perhaps dear waist you'll think I've no right to complain about your abandonment. Yet I believe firmly that small waists are wasted on the young. What have these pampered pups done to deserve them? They squander their youth rubbing tanning lotion over lean limbs and downloading music files onto their iPods. I declare unapologetically that it's women like me who have sacrificed our figures to gestate the next generation (or at least a portion thereof), who deserve the Playtex payback. Drop waist dresses be damned; I miss my belts! Must I spend eternity rolling around on a stability ball before you'll give me another chance?

Must I spend eternity rolling around on a stability ball before you'll give me another chance?

I am also haunted by the thought that my own recklessness drove you away. Perhaps you would have remained faithful if only I had worshiped at the Shrine of the Elliptical Trainer and Our Lady of the Perpetual Rowing Machine at six o'clock in the morning. This was my habit, in fact, until I read that sleep deprivation was clearly linked in scientific studies with weight gain. Continuing with this regimen would have been the very definition of reckless. I replaced these outings to the gym with morning prayers, sometimes so fervent that they must have been aerobic. Yet results have not been visible to the naked eye.

Besides, discipline only goes so far. You show me any other descendants from the Russian Pale of Settlement who don't thank God Almighty for the "relaxed fit jean" and I'll show you a liposuction bill for ten thousand bucks. Maddeningly, some specimens like this do exist, paragons of exercise and food discipline. It's bad enough that they shame me by huffing along on the Stairmaster that I vacated in order to catch some shut-eye. Worse, they take their kids out for ice cream and just sit and watch, as if going for ice cream is a spectator sport. When the dessert cart is waved in front of them, they wave it right back as if swatting a mosquito. They gave up white flour and chocolate by age 30. Well, I'd give up chocolate too, but I'm no quitter.

I know that we can learn to be close again. I'm counting carbs, avoiding white sugar (at least once a day) and committing to four hours a week of ab crunches on that blasted stability ball. Waist, if you don't give me a second chance, you are dooming me to a life in the Endomorph Annihilator (oxygen tank not included). Do you really want this on your slim conscious?

I'll be waiting to hear from you. In the meantime, you know where you can find me: back at the gym, dancing my way back to you.

Judy Gruen is the author of three humor books, including the just-released "The Women's Daily Irony Supplement." You can read more of her work on www.judygruen.com.