How to be a Parent: A Father's Day Special 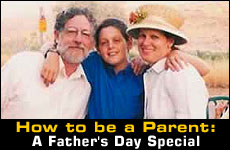 Koby Mandell wrote this article on parenting the year before he was brutally murdered by terrorists.

This article on parenting was written by Koby the year before Arab terrorists murdered him on May 8, 2001. Koby was very concerned about kids having their own rights, making their own decisions, and stating their own needs. His wise, loving spirit guides Camp Koby, the camp in Israel we established for kids whose parents and/or siblings were murdered by terrorists.

The article was first published on Wholefamily.com and is excerpted from his mother's book, "The Blessing of a Broken Heart" (Toby Press, 2003).

If I were my parents, I would always stick up for my kid because if you don't, your kid begins to feel bad and thinks that you don't care about him. Anyway, your kid always needs somebody to stick up for him.

I would also let him keep his room however he wants. But tell him to clean it once a week. If he doesn't want to clean it, don't make him, just close the door. Make sure that nobody cleans up for him.

Let him pick his own friends. If you don't like one of his friends, then tell him that. If he doesn't want to change his friends, tell him that you won't let the friend come in the house. But still don't take him away from his friends unless he's doing something really bad like drugs.

Let him do what he wants, work with what he wants, and how he wants to work. Let him take as much time as he can. But that doesn't mean he can wait a week if you need something done now. Like bringing down the laundry or taking out the garbage.

Have meetings with his teacher every other month to check how he's doing. If he's not doing that well, talk to him about it but be gentle. Sometimes he's doing as good as he can.

Dinner. Dinner is one of the most important meals that you should have together at the same time always with a full meal, including drinks, salad, and a main course. And when the kids are good -- dessert. During dinner, you should ask the kids how their day was, what they did, and what happened.

After dinner, you do not have to serve any more dinners, but you can serve snacks. After 9:30, the kitchen should close for you. Your kids can still go in and get whatever they want.

Allowances: Kids should get allowances according to their age. Like you don't give a five-year-old a buck. But you do give an eight-year-old a buck. For every year, the kids' allowance should go up by at least a half a dollar. Start giving allowance (about a quarter) at the age of five. So kids can learn the value of a dollar. But they have to do chores for the money.

How to talk to your kids:
Talk to your kids gently. And not that much. Let the kids do the talking. If they need encouragement to talk, start talking a lot and then let them pick up. At the end the parents should do almost no talking and just say, uh huh, and yes.

Koby Mandell was brutally beaten to death by terrorists on May 8, 2001. Camp Koby (www.kobymandell.org/campaign.htm), which is named for him, provides a fun and understanding get away for children who have lost a parent or sibling to terror. Going into its third year of operation, Camp Koby has helped over 2,000 children and teens with the grief and healing of losing a loved on.

Telling Our Children the Message of Chanukah

Secrets from a Wannabe Balabusta
Seeing Without Eyes
Why Shouldn’t We Eat Whatever We Want?
The Power Of Prayer
Comments
MOST POPULAR IN Family
Our privacy policy
Aish.com Is Looking for Great Writers