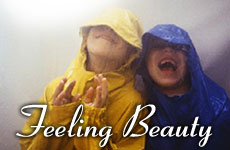 Learning to see life through the eyes of a poet.

Through an odd collision of genetics, somehow my husband, an extremely logical attorney, and I, a relatively pragmatic physician, have a son with the soul of a poet.

From a very early age, a sublime smile playing on his lips, he would tilt his head and stare, as if enticed by something beyond his vision. As soon as he could talk, he would say things like, "Mama, please wear that sweater again. It makes your eyes and hair shine."

To take a walk with Joey is to notice the beauty in the mundane.

To take a walk with Joey is to notice the beauty in the mundane. It is to recognize that tree roots really are alligators, and that raindrops on leaves are sparkling diamonds from heaven. The other morning he exclaimed, "Mama, look! The birds are dancing for us!" As I looked up I saw a group of birds being whipped around by the wind, and indeed, they appeared to be dancing.

When I listen to him I marvel that his clear green eyes see past the obvious and seek a more pure, beautiful essence. Though my scientific training has taught me to approach people and situations in a stepwise, systematic fashion, my years of experience are teaching me what he already knows -- that past the glare of the obvious, the subtle glow of what lies beneath is often much more amazing.

I was a first year medical student when I first realized that outward appearances occasionally belie the truth. Late for my medical interviewing class, I was assigned the patient no one else wanted -- the homeless man muttering at the end of the hall. I walked toward his room and was taken aback by his matted hair, filthy face and darting eyes.

"Mr. Allen?" I ventured, determined to get out of there quickly.

"Uh, I'm Jackie, a student. I just have a few questions to ask and then I'll leave you alone."

"Make it quick," he grumbled.

I started asking my rudimentary medical history questions which he answered, annoyed, with shifty eyes. Though his eyes kept wandering, his answers were articulate and succinct. At the end, as more of an aside, I asked, "How did you end up here?"

For the first time, his gaze stilled and he looked directly at me. Perhaps because I seemed harmless, he let down his guard and told me his story. He was Jewish, had been married with a house and two cars, and worked as a photographer. Through a series of events -- a divorce, bad economy and depression, he ended up on the wrenching path that is homelessness.

From an educated viewpoint, he told me all about the horrors of skid row. And then he said something that I'll never forget: "I used to be an artist and photograph beautiful things. I want to be able to focus on beauty again."

There it was -- even beneath such a hardened and gnarled surface, he glowed.

When I went back the next day, he was gone. But even now, when I see homeless people, I wonder, after their gaze steadies and the mumbling stops, what sort of story would they tell, what sort of beauty is theirs?

More recently, a young woman came to my office. She had the brash swagger of someone who had lived hard. Tattooed and pierced, she appeared disaffected, as if she couldn't be bothered by emotions. As I examined her, I noticed needle marks in her abdomen. Figuring I knew the answer, I asked accusatorily, "What is this from?"

"Oh, that," she said somewhat sheepishly. "I'm giving myself hormone injections. I'm donating my eggs to an infertile couple. A family took me in as a child after my mother left and I feel if a couple really wants a baby and can't have one, I would like to help out. It's my way of giving back."

Again, the softness under the rough exterior.

Looking beyond what is in front of me even helps me, on occasion, treat patients.

A few months ago, a woman came to my office complaining of intractable headaches for one month. A corporate attorney in a big firm, she had the air of competence and power. The headaches, occurring each afternoon, were becoming increasingly debilitating. After a thorough history and physical exam, I could find nothing wrong with her, but I did notice a distinctive medallion around her neck.

Realizing I was eyeing it, she said, "This is from the Burning Man Festival" (a two-day new agey folk music festival held in the Arizona desert each year).

"Wow," I replied, "you wouldn't expect a lot of corporate attorneys there."

I sent her for head scans and labs, all of which came back negative. When she came back a week later, I told her perhaps the headaches are stress or anxiety related, but I could tell she was not convinced. She wanted a diagnosis and medicine, and I could not deliver.

When I didn't hear back from her, I assumed she had found another doctor. Then she came back last week.

"Dr. Yaris, something you said made sense."

Surprised she had listened and tried some of the stress reduction techniques I had suggested, I said, "Really?"

"You were right -- there AREN'T any corporate attorneys at the Burning Man. Congratulate me! Today is my last day at work!"

She was going to work as a child advocacy attorney, and even do pro-bono work. Not surprisingly, the headaches have gone away.

As I continue to practice medicine, these types of experiences have become more commonplace. The high level executive having chest pains until she quit work to become a writer. As she put it: "In my heart, I always knew I had a novel in me. It finally needed to come out." And the high tech vice president with low back pain until he opened a foundation for deaf kids, "to give back."

Witnessing all of this, I am beginning to think my job as a physician is not only to diagnose what is going on in people's bodies, but to help them find the incredible light that is their spirit as well. My education has taught me to practice the science of medicine, but I hope, following my son's lead, I will learn to practice the poetry of medicine.

As I watch my son, his head tilted slightly and his face almost beatific as he gazes on the pinks and blues of a winter sunrise, I pray we don't "educate" the whimsy out of him, and that somehow, through him, I will learn to see the birds dance.