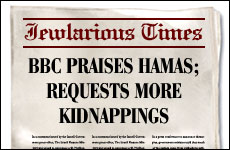 JEWLARIOUS SATIRE -- On the heals of the release of journalist Alan Johnston from captivity by Hamas, The British Broadcasting Corporation has praised the group considered a terrorist organization by the U.S., Canada, and most European nations, and in fact requested he be imprisoned again. "We are so thankful that Alan is back in Britain safely," said BBC Spokesman Niles Stanford, "but we are even more thankful that Hamas gave him that special opportunity to be taken captive in the first place. We would be grateful if Hamas could make the time to have him ‘embedded' once more."

"Calling it a ‘hostage taking' I think is a misnomer. We prefer to view it as an extended ‘educational retreat.'"

Media outlets worldwide have been surprised by BBC's take on the events, wondering why they have taken such a light view of such a seemingly serious event. "Listen, calling it a ‘hostage taking' I think is a misnomer," continued Stanford. "We prefer to view it as an extended ‘educational retreat.' Alan's captors generously gave of their time, tutoring him on the history of the conflict, the rightfulness of their cause, and how to make a road side explosive device out of children's toys and oven cleaner." When asked about the tense moment in which Johnston was outfitted with a suicide bomber's vest, Stanford replied, "Oh that? Come on – you have to let the Jihadis let off some steam once in a while."

According to BBC Middle East correspondent, Sam Allenby, the media is twisting the story. "The Israelis are the real kidnappers. Just look at what they've done. For starters they evacuated every last inch of the Gaza strip last year. Could you think of a more heinous crime? But it gets worse. They provide the Gaza residents with water, electricity and medical attention. If that isn't terrorism I don't know what is."

With Britain now on a heightened state of alert after the recent terror threats, the BBC thinks their nation has much to learn from Johnston's experience. Stanford concluded, "If we as citizens of Great Britain, people of the world, could all just take some time to be kidnapped by Islamic terrorists, our planet would be a much safer place."

You Think Your Job Is Bad?
How I Learned to Love the Multiverse
10 Big Jewish Inventions
A Journey through Jewish Sicily
Comments