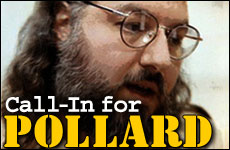 Passover is the holiday of freedom. After 22 years, isn't it time?

Twenty-two years ago Jonathan Pollard was imprisoned on charges of passing American security secrets to Israel. The Jewish people refuse to forget him.

The latest attempt to free Pollard is a nationwide call-in campaign, to ask President Bush to issue executive clemency. The number to call is the White House at 1-202-456-1414.

Executive Clemency is Pollard's only recourse. He exhausted all other legal options last year when the U.S. Supreme Court declined to hear his case.

The call-in campaign is the initiative of Rabbi Pesach Lerner of the National Council of Young Israel, who has visited Pollard many times in his prison cell in North Carolina.

The leading Torah sages in Israel wrote an appeal to President Bush.

The call-in campaign has broad support in the Jewish community. The Conference of Presidents of Major American Jewish Organizations wrote to President Bush that while they "represent a broad spectrum of views, the fifty-four member organizations unanimously authorized us to communicate this appeal that you grant clemency to Mr. Pollard."

As well, the leading Torah sages in Israel, Rabbi Yosef Shalom Elyashiv and Rabbi Aaron Leib Steinman, wrote to President Bush: "We appeal to you as President of the greatest power on earth, the epitome of compassion and generosity, to grant clemency to Mr. Jonathan Pollard."

The argument for the release of Pollard is 3-fold:

(1) The Disproportionate Nature of the Sentence

Pollard was imprisoned in 1985 and convicted on one count of passing classified information to an American ally -- Israel. The information that Pollard passed dealt with Syrian, Iraqi, Libyan and Iranian nuclear, chemical, and biological warfare capabilities -- being developed for use against Israel.

It is argued that Israel was legally entitled to this information according to a 1983 Memorandum of Understanding between the two countries. The information that Pollard passed to Israel is credited with allowing Israel to prepare civilians with gas masks and sealed rooms in the event of poison gas attacks, five years before the eventual attacks.

Pollard is the only person in the history of the United States to receive a life sentence for spying for an American ally.

The severity of Pollard's sentence is unprecedented. The maximum sentence today for such an offense is 10 years, and averages 2 to 4 years. Life sentences have previously been handed only to those found guilty of spying for enemy countries. And although Pollard pled guilty as part of a plea bargain, he was shown no leniency and was given a life sentence. Pollard is the only person in the history of the United States to receive a life sentence for spying for an American ally.

Furthermore, Pollard has expressed remorse, both publicly and in private letters to the President and others.

(2) The Mitzvah of "Redeeming Captives"

The Jewish obligation to redeem captives is near the very top of religious imperatives. It is so significant that even a Torah scroll may be sold to ransom a captive. Throughout Jewish history, Jewish communities went to extraordinary lengths to redeem captives.

The Talmud says that captivity is worse than starvation and death. And the Code of Jewish Law rules that one who delays in ransoming a captive is considered like a murderer (YD 252:3).

Dr. Joseph Geliebter, of the Rabbi Leib Geliebter Memorial Foundation, who is sponsoring the call-in campaign, says that the 22 years of incarceration has special significance. For 22 years, Joseph was separated from his father, Jacob. And the Talmud indicates that during the 22nd year of an unresolved matter, there is Heavenly intervention. (Ketubot 42b with Rashi)

A variety of U.S. public officials support Pollard's release. In reference to Pollard's life sentence, Federal Judge Stephen Williams said that "the government's breach of the plea agreement was a fundamental miscarriage of justice."

James Woolsey, former head of the CIA, recently told Israel National News: "My view is that 20 years is enough. I also think that the close relationship between the US and Israel is also of some consideration, and at this point I think he's served long enough."

Whatever facts he might know would have little if any effect on national security today."

Rudolph Giuliani, former Mayor of New York City and a 2008 presidential candidate, has said that Pollard's sentence "is way beyond the sentences served by other people that have been convicted of the same offense."

Former US Ambassador Dennis Ross says: "Pollard has been in jail for so long, that whatever facts he might know would have little if any effect on national security today."

The White House call-in campaign continues through Passover, the Holiday of Freedom. The White House counts and tallies all in-coming calls, so every phone call makes a difference. The White House phone number is 1-202-456-1414, and calls are taken from between 10 am and 4 pm ET. Expect the lines to be busy and to keep calling until you get through.

People are also requested to pray for Yehonatan ben Malka, and to say Psalms chapter 121.

For additional information on the Pollard case, see www.jonathanpollard.org

How Coronavirus is Upending Orthodox Jewish Traditions
Korach 5782: Visit to Lift the Spirit
That Time The Ivy League Found A Way To Limit Jewish Enrollment
Would You Rather Be Right or Happy?
Comments
MOST POPULAR IN Israel
Our privacy policy