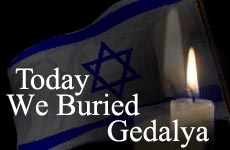 As we remember the great sacrifice of the soldiers who were killed defending Israel, the following is a tribute to one of the latest heroes of Israel.

Today we buried my 21-year-old nephew Gedalya. At midnight last night four soldiers and a doctor knocked on my sister Penina's door. Her husband Simcha had just left for the Ukraine on a mission for the Jewish Agency. They called him in the Ukraine to tell him to come home for his son's funeral.

At 7 AM, they called me. I had to tell the rest of the family. I had to ask a relative, Yakir, to go to my son Yoram and inform him of what had happened. My other son Yossi is also serving in the army. When Yoram saw Yakir's face, the first thing he thought was: "Which one is it? My cousin Gedalya or my brother Yossi?" Without a word exchanged, Yakir understood and said, "Gedalya."

I can tell you that although the fear is always there, the worry about "hearing the knock," you are never prepared. The shock is total. The grief is inconsolable.

His mission was to teach them to be ethical, moral, and humane in their treatment of others.

Twice today the radio replayed a recording of Gedalya's interview on the Army Radio Station. He told how he saw himself as a teacher of his soldiers. His mission was to teach them to be ethical, moral, and humane in their treatment of others. He would not allow any of his soldiers to insult or mistreat Arabs whom they encountered while carrying out their duties. When asked to describe himself he said, "I am a humane soldier."

During the fighting in Jenin, Gedalya had candies in his pocket and whenever he came across Arab children, he gave them candies to calm them down so they would not be afraid of the Israeli soldiers. When we looked at pictures that Gedalya took of the fighting, the battalion commander pointed out a building and said this is the "cake building." Four houses before Gedalya was killed he came across a family with five children huddling in a room, scared. He pulled out a cake he had put in his bullet-proof vest and gave it to the children. He had been saving it for his soldiers.

Gedalya was a poet, composer, and musician. He played piano beautifully. And he was a master at computers. At the age of 17, he even set up his own computer business, which he closed down when he went into the army.

Every unit in the army wanted him. He could have had any job he wanted. But he hid from the army the fact that he suffered from severe asthma, and somehow got himself into a combat unit.

His soldiers said that Gedalya only gave; he never took for himself. He was always calm and collected, always a smile, always optimistic, always doing things 110% perfect. He radiated an inner strength. He was blue-eyed perfection.

At the beginning of this war against terror, Gedalya was fighting in Ramallah. He found the keys to Arafat's office, and led his soldiers in. When the other soldiers wanted to destroy the computers, Gedalya said, "Wait. Let me work on them." He stayed in the office by himself, locked the door, and started checking the computers. When he saw what damning material they contained, he took a screwdriver and removed all the hard disks, which he then handed over to Intelligence.

Gedalya also found a million and a half shekels as well as dollars -- all counterfeit.

When their work was done in Ramallah, they went on to Jenin. Jenin is the place where the majority of the suicide bombers come from. My Yossi described to us how our army got control of Jenin. Jenin was surrounded by tanks on all sides so none of the terrorists could escape. The women and children were brought to a school, and fed and housed there. All men over 16 were arrested and interrogated.

Since the army did not want to hurt civilians, fighting was house to house.

Eventually, the ring was tightened around the remaining terrorists who refused to give up. Since the army did not want to hurt civilians, fighting was house to house. Of course, the easiest and safest way to eliminate terrorists is to aerial bomb them, the way America did in Afghanistan. With one or two bombs the job is finished. But, because we try to remain a humane army, we settled for house to house fighting, the most dangerous form of combat.

Gedalya at one point discovered a house from where they were being fired upon. He asked permission from the officer to fire back and was refused. The officer answered him that there was a family in the next building that had not evacuated as yet and, therefore, they could not endanger their safety.

There were booby traps everywhere: in the trees, in the manholes, on the bodies of killed terrorists, in houses, in the streets. Yesterday, 13 soldiers were killed in a booby-trapped building which collapsed on them.

The fighting in Jenin was very difficult. Yesterday, two of the soldiers who were killed were brought by stretcher to where Gedalya was. He quickly ran to help take the stretchers. All of a sudden, Gedalya shouted "It's Matanya!" and broke down crying. Matanya was his best friend. Gedalya then saw that the other soldier killed was his other good friend. The Commander quickly slapped Gedalya and told him to stop crying, saying "Tomorrow there will be time to mourn." But "tomorrow" Gedalya himself was dead.

At 9 PM, Gedalya was killed. The battalion commanders were in a room with other officers when a sniper shot him through the window. The bullet hit a grenade he was wearing.

At Gedalya's funeral today, his friend Yiftah spoke. Yiftah said that three of their friends had already been killed. One was buried only yesterday. In a poignant voice, Yiftah declared: "Only you and I are left, Gedalya. I am like a wall; I have no tears left. I cannot cry, and I want to cry."

"It will never be all right again."

When Yiftah came down from the podium, he fell into my arms. I had never seen this 21-year-old boy before, but I told him to cry. He held me tightly, and we both cried for Gedalya, whom we both loved so much. Even when I lightened my hold on his body, he held on to me tightly and cried.

After the funeral, I called my mother (Gedalya's grandmother) in Miami Beach to tell her that it was over and that everything is going to be all right. She answered: "It will never be all right again."

My son Yossi returned to his unit in Jenin, insisting that we not worry, that he would be safe inside his tank.

Israel is at a crossroads. If we do not put an end to terror, then terror will put an end to us. There has never been a more just war. What we need now is the support of every right-thinking person on this earth, so that the job an be completed.

Gedalya died defending Israel, so that there would be a home for all Jews. Would that his death not be in vain!

Through the Eyes of a Soldier

Remembering Ari Fuld: Miracle In Lebanon
For Every Individual, A Torah Scroll
Allegiance To The Monarch
Meet the Real You: Yom Kippur
Comments
MOST POPULAR IN Israel
Our privacy policy
Aish.com Is Looking for Great Writers