On the Jewish Road 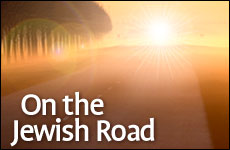 I don't know where my observance will end up, but I'll never be the spiritually disconnected Jew I once was.

Nothing about the way I grew up would have predicted where I am today. I was raised in a middle class suburb of New Jersey. The town, which was once staunchly Italian and Irish, had increasingly become more Jewish, mostly as a result of the migration of Russian and Israeli Jews in the ‘80s and ‘90s. Many of my friends were Jewish, simply because that's who lived in the town.

My family was secular, unaffiliated. I am originally from the former Soviet Union, where Jewish identity was stripped from people back in the Russian Revolution. My family somehow maintained their Jewish identity in a particularly Russian sort of way. This meant supporting Israel and gathering with family on holidays. Jewish knowledge or religious observance was not passed on. That was all seen as antiquated, something that modern, secular, city people did not engage in.

In college I began exploring my Judaism. I participated in Jewish activities, and even went on a short trip to Israel the summer after graduation. These were meaningful, but none moved me along as much as two months with Livnot U'Lehibanot in the fall of 1999. Livnot is a beautiful program that combines community service, hiking, and Jewish study in Jerusalem and Tzfat.

I didn't know it then, but the seeds planted by that program would eventually flower. I have evolved from a secular, unaffiliated, and unknowing Jew -- to one who identifies as traditional, with hopes to grow even further.

In the six years since I participated in that program, I've gotten married. I always wanted to marry a Jewish man, but after my return I also knew I wanted someone who shared my love of growing Jewishly. I became convinced that my future husband should, like myself, want to be affiliated with a traditional synagogue, keep a kosher home, support Israel, and be willing to send our children to day school so they could get the Jewish education I did not.

Seek and you shall find, as the saying goes. And I did. My husband, an attorney, grew up Conservative. His family kept kosher at home, went to synagogue on the High Holidays, and had Passover Seders. They passed on the foundations of Judaism, but like many American Jewish families, did not imbue him with Jewish spirituality. When we married we began to build the kind of life we believed was important. The key was that we were in agreement about our Jewish values.

We began with a commitment to do something every week for Shabbat. We joined a local group of traditional Jews who rotated gathering in people's homes for Friday night services and a dairy potluck dinner. On those weeks we did not attend, we usually had a traditional dinner at home. On Saturdays we went about our lives, running errands, cleaning, shopping, etc.

When we began to search for a new home, we looked for a community that had a traditional synagogue along with a sizable traditional community. We found that mix in Highland Park, NJ, and bought a home close by that we could afford. We joined a synagogue where many members observe kashrut and Shabbat. As we acclimated, we began to attend Saturday morning services, and made a commitment to keep as much of Shabbat as we were ready for at this time.

I believe in combining practical strategies with spiritual ones.

After we moved, we became serious about starting a family. I am a big believer in combining practical strategies with spiritual ones. Why limit yourself, if there's power available in both? I recall long ago hearing about the mitzvah of mikveh. I dismissed it out of hand, because it seemed so archaic and unnatural.

This summer, at a reunion for my Israel program, I met a woman who made me rethink my position. She began going to the mikveh after someone suggested it as a remedy to infertility. She, like myself, came from a secular background, and was initially resistant to the idea of mikveh. But she tried it, recognized the positive effect on her marriage, and embraced the practice.

By the time we met, she was seven months pregnant, and believed that the mikveh had much to do with that. I decided to try it myself. Being in my 30s, I'll take whatever help I can get with fertility.

Much like the woman I met, I too have experienced the positive effects on my marriage. Although we are not so strict, during the off time we do abstain from marital relations. For me, the mikveh has become another important way to connect to my soul, and to the long line of Jewish matriarchs. It's about me and the Jewish people both.

My husband and I have grown a great deal since we first married. We went from living basically secular lives to ones with continuous Jewish awareness and a commitment to increasing practice. We assess our beliefs and practices at Rosh Hashana time, and decide together where we will go in the coming year. We have gotten tremendous support from people in our synagogue, who too have moved into a more traditional Jewish lifestyle. They keep us moving forward, when we feel weighed down by our families' and society's resistance.

We know we are swimming against the tide, and to some people that is threatening. We have dealt with criticism and judgmentalism from our families, friends, and even strangers. Yet we are committed to continue along this path because we feel strongly that it is rich with meaning and purpose.

The questioning of our lifestyle choices comes in many forms. Some of it is trivializing the additional practices we take on as being antiquated or illogical. I am also frequently told that support for Israel is all that's expected of a Jew.

Other times the pressure is about not being in flow with the rest of the family, for instance when family functions take place on Shabbat. I have gotten pressure about the importance of attending family events, of putting aside my personal beliefs for "what's best for the family," and even some guilt that my actions would forever harm my relationships with family members.

What was at first met with questioning and skepticism, has now become accepted as ‘just the way we are.'

I mitigate the criticism/guilt in a number of ways. The most important is what I term ‘consistent action.' Although not going out on Fridays, or not eating non-kosher meat, was at first met with questioning and skepticism, it has now become accepted as ‘just the way we are.'

I also try not to explain in-depth what we are doing, nor impose it on anyone else in my family. I respectfully explain our beliefs and practices when asked. I've learned to discern true curiosity from disdain.

I constantly draw strength from the sense of purpose I feel with the direction of our lives. I am overjoyed to be part of a Jewish community and of Jewish continuity. We know what we want to practice and why. We also know that we want to pass along to our children, God willing, both the knowledge and the spirit of our beautiful faith.

A friend once noted that once she was exposed to the "truth" of Judaism, she knew this was what would shape her life. I have to agree. Having assessed many "truths" in this world, for me, Judaism is the only one with authentic purpose and meaning. A soul at peace is the best mitigation of all.

I don't know where we will ultimately end up -- if we will eventually grow to keep Shabbat completely, or the day will come where I only wear skirts, or if my husband will daven more than the once a week on Shabbat. All I know for today is that there is a peace in our lives that we did not experience prior. It is there because we have invited God and his values into our lives, into our home and even into our bedroom.

We know that we will never go back to the secular, spiritually disconnected Jews we once were. This journey is ‘one way' for us, and we are forever grateful.

My Family’s Life-Changing Summer in Israel

My Nazi Grandfather Would Have Shot Me

Body Image, Eating Disorders, and Living a Jewish Life
The Connection between Israel and the Jewish People
Grit and Torah
Why We Can’t See True Reality
Comments
MOST POPULAR IN Spiritual Odysseys
Our privacy policy