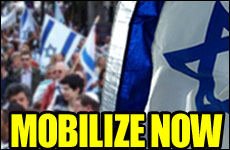 Anti-Semitism has leapfrogged from isolated attacks against Jews to incitement to genocide -- the actual elimination of the Jewish state.

Just over three years ago, at the first-ever global forum on anti-Semitism organized by the State of Israel, the essential task was to define the beast -- the new anti-Semitism. Since then, as the fourth such global gathering meets this week, efforts to incorporate the "three-D" distinction between legitimate criticism of Israel and the new anti-Semitism -- demonization, double standards and delegitimization -- have become part of international documents and discourse.

These and other accomplishments, as important as they are, have been dwarfed by the quantum leap anti-Semitism itself has taken. It has leapfrogged from isolated attacks against Jews to incitement to genocide -- the actual elimination of the Jewish state.

This shift has come in the form of a pincer movement. On one side, we have the Iranian regime, which is denying the Holocaust and calling for Israel to be "wiped off the map," while racing to develop the physical means of doing so. On the other side, we have what is, in effect, international silence in response, coupled with growing willingness to discuss Israel's existence as a mistake, an anachronism, or a provocation.

The idea of a world without Israel is more acceptable in polite company, the media and academia today than Hitler's expressed goal of a Europe without Jews was in 1939.

We must recognize the fact that though sympathy for Iran's expressed goal of Israel's destruction is hardly mainstream, the idea of a world without Israel is more acceptable in polite company, the media and academia today than Hitler's expressed goal of a Europe without Jews was in 1939.

Given this situation, it should be clear that we are beyond the stage of definitions. The Jewish world now must mobilize at a level no less than during the struggles to establish the State of Israel and to free Soviet Jew
ry. It is this latter struggle that presents the most potent model for action today.

Though both sides of the genocidal pincer are in quite advanced stages of development, the Jewish world remains mired in pre-mobilization debates reminiscent of the early stages of the Soviet Jewry struggle in the 1960s.
This may be hard to recall in light of the subsequent success, but back then a debate raged among Jews over whether a campaign to free Soviet Jewry was "too parochial," and whether being out front risked making it too much of a "Jewish issue."

Before these internal debates were resolved the Soviet Jewry effort could not be regarded as a movement, capable of attracting allies and moving governments. Nor were such debates easily, or ever fully, put to rest.

As late as 1987, when the by then mature and powerful movement organized the largest-ever Soviet Jewry rally on Washington's mall to coincide with Mikhail Gorbachev's visit, some Jewish leaders wondered if the community could be mobilized, and if such a rally would be counterproductive. They warned that only a few thousand souls would brave the winter weather, and that the Jewish community would be considered "warmongers" who were spoiling the recent warming of US-Soviet relations.

In actuality, over 250,000 people came to a rally that was pivotal in opening the floodgates, not just to 10,000 or 20,000 Jews, which seemed like a dream at the time, but to a million Jews who came to Israel over the following decade.

Since it has been a while, a reminder is in order of what full mobilization looks like.

First, as Shlomo Avineri has recently proposed, Iranian officials should get the Soviet treatment. Just as no Soviet official, including sport and cultural delegations, could travel without being accosted by protests and hostile questions, so it should be with anyone representing the Iranian regime. As in the Soviet case, such protests will not themselves change Iranian behavior, but they are critical to creating a climate that will influence the policies of Western governments.

Second, an inventory of the governments and companies that provide Iran with refined oil, huge trade deals, and even military and nuclear assistance should be taken, and public pressure be put on them to end their complicity with a regime that is racing to genocide.

Third, the pension funds of US states should be divested from all companies that trade with or invest in Iran. This divestment campaign must be pursued without apologies or hesitation.

Fourth, every country that is party to the Genocide Convention should be called upon to fulfill its obligation under that treaty and seek an indictment of President Mahmoud Ahmadinejad on the charge of incitement to genocide, which is a "punishable offense" under Article III of that treaty.

Fifth, human rights groups, such as Amnesty International and Human Rights Watch, which are heavily nourished by Jewish values, passion and funding, must stop squeezing both sides of the genocidal pincer. These groups must be challenged, on the one hand, to press for enforcement of the Genocide Treaty, to stand up for human rights in Iran, and to oppose and expose Iranian support for terrorism. On the other, they must stop perverting the sacred cause of human rights into a cudgel in Iran's hands against Israel. This happened just months ago when, during the Lebanon war, such groups all but ignored Hizbullah's terrorism from behind human shields and called Israel's self-defense a "war crime."

COMBATING THE DENIAL OF ISRAEL'S RIGHT TO EXIST

Just as the two sides of the pincer themselves are connected, so too must be the efforts to combat them. All the above steps concern the Iranian side of the pincer. But combating the other side, the denial of Israel's right to exist, is no less critical -- and more difficult, since at times they necessitate confronting, not a rogue regime, but our own cherished institutions. On this front:

Denying Israel's right to exist lays the groundwork for a second holocaust even more directly than does denying history.

First, universities that provide chairs for professors who campaign against Israel's right to exist should be boycotted. In a number of countries, denying the Holocaust is a criminal act. In the current context, denying Israel's right to exist lays the groundwork for a second holocaust even more directly than does denying history. Therefore, the promulgation of such an ideology should be fought even by societies that justifiably revere freedom of speech.

This may seem a hopelessly difficult task, but it is not. After 9/11, one woman, a student, took on Harvard University, which was ready to accept a $10 million "gift" from a Saudi sheikh. Harvard backed down, showing that moral clarity, unapologetically and passionately expressed, can change seemingly unassailable ideas.

We must stand for a basic principle: If denying the Holocaust can land a professor in jail, denying Israel should not land him tenure.

Second, support for Israel must be demonstrated. Two decades after the massive Soviet Jewry rally of 1987, we need to return to the Mall on Israel's Independence Day in May with two messages: Support Israel and Stop Iran. It is late, but not too late, to overcome those fears of being "too parochial" that the Soviet Jewry movement succeeded in dispelling more than 30 years ago.

The fight to support Israel and stop Iran now is, if anything, less "parochial" than the Soviet Jewry movement was then. Then, the Jewish world took on a global superpower, the Soviet Union, and confronted the reigning American foreign policy paradigm -- detente -- with a very different one: linkage of trade to human rights.

Then, we successfully argued that the freedom to emigrate was not just a Jewish concern, but a universal one, and we were more right than we knew. The Jackson-Vanik amendment and the Helsinki Accords were critical factors in triggering the internal collapse of the Soviet empire. This collapse not only freed millions of Jews, but all the peoples behind the Iron Curtain, and ended a half-century-old superpower
stalemate that threatened the entire planet.

Now the world stands at a no less fateful watershed. The world's
most dangerous rogue regime is on the verge of obtaining the
ultimate weapons of terror. Already, Iran's confidence that it will not
be stopped has led to one war, last summer's war in Lebanon
started by Hizbullah. Already, Iran is fueling conflicts in Iraq,
Afghanistan, Lebanon and Gaza -- and all this before the regime
enjoys its own full, declared nuclear umbrella.

The moment before mobilization is always a lonely one, in which it
seems that the obstacles to making a cause universal are
insurmountable. Yet, as in the case of the Soviet Jewry movement,
we are not alone. We are surrounded by potential allies who may
not themselves know they are ready to join us until we create a
movement for them to join. Our leadership will give others the
opportunity to act. If the Jewish world does not lead the way, who
will? It is as true now as it was then; if we build it, they will come.

A decade after the wave of democracy that came with the fall of the
Soviet Union, an Iranian-led wave of terror is rising that will not stop
until it is stopped. Ultimately, we overcame our fear of parochialism
to stand up for Soviet Jewry, and left the world a much better place
for it. Now we must do the same to prevent a second holocaust,
and in the process save the world.

Harvard Freshmen’s Website is Helping Ukrainian Refugees Find Shelter
The Power Of Prayer
Va’etchanan 5782: A for Effort
Can You Show Me This "God?"
Comments
MOST POPULAR IN Israel
Our privacy policy
Aish.com Is Looking for Great Writers