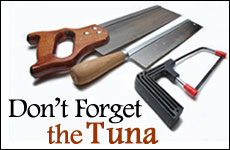 Good advice to the kosher traveler.

Of all of the challenges I have faced in my life, none of them, and I mean none, compare to the difficulty of trying to open a pre-cooked, pre-packaged kosher meal. This is because they have apparently been sealed by NASA engineers and will defy nearly all attempts to open them, short of sandblasting.

I recently returned from a business conference where I informed the organizers of my dietary requirements -- I keep kosher. At first I was grateful that they were so solicitous about my meal arrangements. (I did pad my suitcase with emergency back-up provisions, though, including Weight Watcher snack bars and sealed packets of tuna. One never knows.) But I bet that even someone of Miss Manners’ refinement would have been sorely tested by the task of unearthing a meal that was wrapped in more layers than King Tut.

As we sat at dinner the first evening, my fellow conferees enjoyed their salad as I remained vigilant against consistent efforts among the waiters to sneak up on me and pour wine into my empty glass. My well meaning tablemates, seeing that I was food-less, also kept passing me the bread basket as relentlessly as if they were playing hot potato. But my biggest test arrived when the waiter, who had given up on trying to decant the Chablis for me, suddenly appeared bearing not one, not two, not three, but four tightly sealed plates. Naturally, this startling sight caused everyone else at the table to stop eating and stare in wonder.

"What did you get?" asked my neighbor, nonplussed.

"I requested kosher meals, though I didn't expect to receive them all at once," I said, attempting a little levity in an awkward situation. I gingerly reached under one plate to try to unwrap the salad, but it was Super-Glued shut. Turning the plate over seemed messy, if not downright boorish, so I tried to saw through the top layer with a dull knife.

Just then, a waitress came over. "Can I get you anything?" she asked solicitously.

"Do you think the kitchen has a hacksaw?" I asked.

"Let me go check!" she answered, eager to please. A few moments later, she returned.

"I'm sorry. We're out of hacksaws. Would shrimp cocktail do instead?"

Progress on the salad plate was slow and tedious. I summoned every bit of bicep and tricep strength I had built up during a year of Pilates classes to finally penetrate the foil -- only to be faced with a layer of heavy duty plastic, the likes of which are used to make children's climbing equipment.

Did people who keep kosher always have to saw for their suppers?

I despaired. I wanted to do the Jewish people proud, yet I wondered what thoughts were running through my tablemates’ minds: Did people who keep kosher always have to saw for their suppers? After all, condemned hotels have been detonated with less manpower than was required for me to get to a lousy plate of iceberg lettuce choked in thick Thousand Island dressing. Still, I comforted myself that when I did finally break through the earth’s core and find my food, at least there would be payback in the form of a gezunte portion, not those sad, itty-bitty goyishe portions on everyone else’s plates.

While the others enjoyed dessert, I sensed victory was near: my main course was only two layers away! But then I had a rude shock: Even my portion of chicken was so tiny, it could have been measured by an anti-Semitic French chef! For this I toiled a half-hour? I asked silently. Then I had a worse fear: What if my meal wasn’t really kosher? Kosher meals, outside of the airline variety, are never this miserly. I checked the kosher certification again -- everything appeared to be in order. I sniffed surreptitiously at the chicken, though I don’t know what I was expecting to smell. Perhaps the caterer didn't want to spark envy among my non-Jewish colleagues. Perhaps he just knew I could stand to lose a few pounds.

Whatever the reason for my small portions, I sure was glad I had the foresight to have packed emergency back-up snacks. By the time the conference ended, I had mastered the art of sandblasting through to my mini-meals in 30 minutes or less, my skirt was a little looser, and my arms were more toned, too.

My advice for the kosher traveler off on business: don’t forget the foil-packed tuna.

Oops, Did I Just Say That?

Oil Prices So Low, Arab Nations Consider Educating Youth
Korach 5782: Visit to Lift the Spirit
That Time The Ivy League Found A Way To Limit Jewish Enrollment
Would You Rather Be Right or Happy?
Comments
MOST POPULAR IN Jewlarious
Our privacy policy