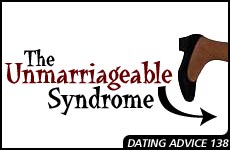 He thought their engagement was just around the corner. But suddenly she dumped him.

I met a woman that has great future potential. At first, we spent a lot of time together, but as things progressed we spread things out more, though our dates were always 5 or 6 hours long.

After we'd been dating for a few months, my twin brother was due to arrive from out of town. I knew that should things continue to progress, this was likely the only chance that my dating partner would have to meet my family before a wedding.

The week before my brother was to arrive, I knew that the issue had to be addressed. She told me that she would meet my brother if I wanted, but if I considered it "a significant step," she was not willing to do so. She told me that she was still unsure of where things were going with us. I told her I was not pushing and we would take as long as it took. She agreed to meet my brother. Great!

The two of them met and got along very well, and everyone seemed to have a good time. I drove my date home and then she hit me with: "We need to talk." I could tell what was coming, but was still completely shocked. She said: "I don't want to see you anymore -- despite that you are a great guy, I enjoyed all of our dates, and you have the qualities I am looking for in a husband. But I just don't feel I could come home to you on a daily basis."

I was confused and thought this might be a case of cold feet, since she had been badly burned in the past.

A third party contacted her again and asked her if she was sure it wasn't just a case of cold feet. But she said she's made up her mind.

This has left me in a complete state of confusion. My sense is that she really did have some concerns, but told me everything was going well because she wanted to keep me interested... so that I wouldn't be the one to break things off.

I am finding it hard to let go. There was such a strong connection there. What do I do now?

Our hearts go out to you. Unfortunately, your story isn't . Recently we've seen an explosion in the phenomenon of men and women having their hearts broken by "unmarriageable" dating partners -- people who have "one foot in" and "one foot out" of a promising courtship that looks like it is leading to marriage, but doesn't.

We're not talking about people who are unable to relate well to others or are considered "dysfunctional." The people we're talking about are pleasant and personable -- and on the surface seem to be interested in getting married, but for one reason or another either bolt from, or sabotage, a courtship just about the time they're ready to talk about marriage. Usually, the people they have been dating don't see it coming. Because things seemed to be coalescing, and the two were developing an emotional connection, it looked like things were leading to marriage. And this makes the break-up all the more painful.

An "unmarriageable" person may seldom allow a courtship to exceed 10 dates, and when they realize that things are becoming serious, they may look for an excuse to end things. Or, they may juggle multiple dating partners for a prolonged period, thinking that down the road they'll be able to choose between them. While some people actually do make a choice, an unmarriageable person will not be able to do so, and may even say things like, "I wish Mike had Bob's brains, and Bob had Mike's personality." In the end, they usually drop both dating partners in search of something "better."

Other unmarriageable people never become fully invested emotionally in a relationship, because they constantly think that something "better" may turn up, or because they have an unresolved issue that keeps them from getting married (unless they address it).

And of course, there are people who really don't want to get married at this point in their lives, but enjoy dating and don't want to miss out on a social life. They may even tell themselves that when they meet the "right" person, they'll "know" -- but at crunch-time they'll stop a dating partner cold when s/he brings up the subject of where things are heading. The problem is that because they aren't focused on developing the framework for a good marriage, they won't respond positively to a person who is actually "right" for them, because they're not in the proper mind-set.

There's another kind of unmarriageable individual -- we call it "almost the one." S/he really does want to get married, and finds a lot of positive qualities in the person they are dating, but can't decide whether that's the one they want to marry. They often sincerely try to work through any bothersome issues, only to decide at a late point that it is really not right for them. Because it takes so long to arrive at this realization, they unwittingly hurt their dating partner, who has pretty much decided they have met Mr./Ms. Right. Often, such a person benefits from this learning process, and after one or two "almost"-successful courtships, they are able to clarify what they are looking for, go on to meet a suitable person, and get married. However, to the "almosts," s/he is unmarriageable.

Some unmarriageable people may themselves not be aware of the problem. Others know they're not emotionally ready to get married, but may date person after person, almost to the brink of engagement, and then pull away, leaving a trail of broken hearts.

We can understand your feeling of "once bitten, twice shy" when you start dating again, but we hope that this experience won't jade you to the point where you hold back from opening up, or allowing yourself to trust the next suitable woman you date.

We'd like to give you a few suggestions that might help avoid potential marriageability issues in the future. These ideas aren't fool-proof, but they can be helpful.

To begin with, people who have the goal of marriage must determine if the person they are dating has the same goal -- as soon as possible in the process. This applies even at a point prior to knowing if the other person really is right for them.

You can say something like: "I want you to know that the reason I'm dating is that I hope to find the person I will someday marry. I really enjoy dating you and want to continue to do so. While I know that it is far too early for either of us to know if we will be right for each other, and it may turn out that we are not right for each other, I wanted to know if you share the same objective of developing a courtship that will lead to marriage."

If your date does not have the goal of marriage, or if s/he is vague about intentions, then that is your exit cue -- no matter how well you seem to be getting along.

Similarly, don't worry about scaring your date away by introducing this subject at a relatively early point in your courtship, as long as you make it clear that you don't expect either of you to know what will ultimately be the result of your dating. If your date bolts, it's a pretty good indication that the longer you would have postponed this topic, the more time you'd have wasted on a dead-end.

Even when you get a positive response to your statement, there are some red flags that your date may have difficulty making a commitment, becoming emotionally intimate, or deciding that you're the "right one." As you continue to date, be aware: Does your date steer future conversations away from topics that relate to marriage, engagement or commitment? Does the person seem somewhat evasive, turning off a cell phone for long periods, not responding to e-mail, and being unusually hard to reach at times? Does the person have a history of overly-short or broken courtships, ones that frequently end at about the same point on the growth curve? Is the person vague about his or her expectations for the future, doesn't express any strong likes or dislikes, and doesn't seem to have long-term goals? Is the courtship not developing the degree of depth that it should?

From what you have told us, we would not classify the woman you were dating as "chronically unmarriageable." Yet unknowingly, she made matters worse by sending you mixed signals. It appears that she had doubts that weren't getting resolved, and it certainly would have been easier for you had she made her decision earlier. In our experience, we've seen that when someone identifies what they deem to be a "significant doubt" early in a courtship, and that doubt cannot be satisfactorily resolved over the next several weeks, there is a strong likelihood that it will continue to be a troubling issue and will ultimately be a factor in the dissolution of the courtship.

We understand that all this is small consolation for the hurt you are now experiencing. The path to finding Mr./Ms. Right is not always smooth, but we hope you've now gone through the roughest spot, and the journey to reach your ultimate goal will be easy and short.