Reacting to the Tsunami 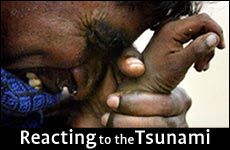 A spiritual response to disaster.

Born in 1948, I have never experienced a catastrophe as massive and sudden as the earthquake/tsunamis that, at last count, have killed more than 60,000 people. Living in Israel during the terror war of the last few years, I have unfortunately become accustomed to crying at the funerals of children. But to read of hundreds of children together being buried in mass graves staggers my mind and batters my heart. How should/can/does one respond to a tragedy this enormous?

A young Israeli traveling in Thailand when the tsunami hit reported to his family that there was no panic among the local people. They are Buddhists, he explained, and believe in the Law of Karma. They accept their fate.

The Law of Karma holds that nothing that occurs to human beings is random. Rather, a meticulous law of cause and effect, action and reaction, determines that, as Americans would say, “Whatever goes around, comes around.” Human actions create effects that, sooner or later, like the tsunami itself building up over time and distance, strike with shattering force.

Certain elements of this idea are consistent with Judaism. Certainly, there is no randomness in the universe, and human conduct sets in motion spiritual forces which eventually manifest in physical effects, revolving back on human beings themselves.

Judaism, however, differs from the Law of Karma in significant ways. First of all, the Law of Karma is strictly personal; an individual who steals will be stolen from, in this incarnation or the next or the next. The individual’s dishonesty will revolve back only on him/herself. It cannot cause others to suffer. Although there is a concept of group karma, here too the boomerang flies back to the hands that threw it; only the perpetrators become the victims.

Judaism, on the other hand, credits human action with a much broader effect. A person stealing $100 in Tel Aviv lowers the moral fiber in Mexico City and could encourage massive embezzlement in Melbourne. Conversely, a person doing a mitzvah in Haifa may avert an auto accident in London or prevent complications during open-heart surgery in Los Angeles. The spiritual channels of effect run far below the surface, untraceable but powerful.

Spiritual forces, like ocean waves, do not lose their power over distance.

A second major difference is that karma is inexorable; a misdeed once committed is, as they say in India, like the tusks of an elephant. It can never be retracted. Judaism, on the contrary, teaches the concept of teshuva. Teshuva means that a person can regret and change his/her mode of conduct, and when s/he does, the past actions are spiritually erased. In fact, if one does teshuva from pure love of God, the subterranean channel, the river of fire, turns into a positive force, a river of sweet water.

If a person even hears about a disaster such as an earthquake, one must relate to the tragedy by examining one’s own deeds.

This is precisely what Judaism endorses as a response to disaster. The Talmud says that when one suffers, one should scrutinize one’s deeds, implying that teshuva for wrong conduct can change one’s fortune. And what if one is not directly affected, but only hears about a disaster that occurred in a distant place? The Talmud asserts that if a person even hears about a disaster such as an earthquake, one must relate to the tragedy by examining one’s own deeds.

It is appropriate to respond to the present Hiroshima-scale disaster by contributing money to aid the relief effort, but physical action should not preclude a spiritual response as well. When you ask yourself, “What can I do?” here are some spiritual responses:

Maimonides asserts that one who fails to respond to suffering by doing teshuva is cruel. The implication is that we have it within our power to stop human suffering. How can we look at the pictures of bodies on the beaches -- each of whom is someone’s beloved relative -- and not be willing to undertake whatever we can to ward off the next calamity?

In the wake of the catastrophe, CNN.com treated its readers to speculation by a noted seismologist that a volcano erupting in the Canary Islands could cause landslides that would send a tsunami hurtling across the Atlantic Ocean with enough force to destroy New York City. Judaism would add that such a scenario is not a matter of fate, nor of geological upheavals, nor of random forces. It is in our power, by the moral choices we make, to prevent the next disaster.

How has the tsunami affected you? Click here to take our quick survey.

Flight 1549
It Takes A Lot Of Faith To Be An Atheist
How Instagram Brought Back This Nostalgic Soup
What Makes Eli Run?
Comments
MOST POPULAR IN Current Issues
Our privacy policy