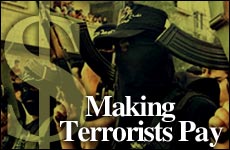 Applying the banal instruments of civil law to combat terror.

On Feb. 25, 1996, Ira Weinstein boarded the No. 18 bus in Jerusalem for the short ride to his job in a supermarket. Moments later, the bus exploded. Hassan Sulameh, a Hamas commander trained by the Iranian Revolutionary Guards, allegedly had planned the attack to coincide with the morning rush hour.

The carnage left Weinstein, 53 years old, scorched and clinging to life. Death came after six weeks of agony. Retribution, in some form, came to his family years later.

We have become accustomed to the imperative, promoted by political leaders of spectacular military action to combat terrorism. However, during the last several years, a young Tel Aviv attorney, Nitsana Darshan-Leitner, has been working to apply the banal instruments of civil law in extraordinary circumstances that neither diplomacy nor military might could or would redress.

On behalf of the Weinstein family, dual American and Israeli citizens, Darshan-Leitner filed a civil suit against Iran for damages for pain and suffering in U.S. District Court in Washington, D.C. in the fall of 2000.

Iran never bothered to respond to the claim, and a hearing went ahead in which Darshan-Leitner had to prove the alleged nexus between Hassan Sulameh, Hamas, and the Iranian Revolutionary Guards, which was linked to terrorists in Lebanon and Syria throughout the '80s and '90s.

The court found for the Weinsteins, awarding $270 million in damages against Iran, a "victory" that surely seemed pyrrhic. How on Earth could a judgment in favor of an American-Israeli Jew against Iran ever be enforced?

Since the Iranian Revolution in 1979, considerable Iranian assets had been frozen in the U.S., but the State Department advised Darshan-Leitner that they were diplomatic assets with appropriate immunity.

Undeterred, Darshan-Leitner worked with legislators and the insurance industry to negotiate an amendment to the United States Insurance Act enabling an injured party to collect damages from a state that allegedly sponsors terrorism. The political reasons for supporting such an initiative are self-evident; however, Darshan-Leitner was fortunate to have the insurance industry on her side even as it lobbied to restrict the opportunity for claims related to terrorism against insurers in the uncertainty of the post-9/11 world.

Six months after the statute was amended, the State Department provided the information regarding frozen Iranian bank accounts, and the Weinsteins, incredibly, received $7 million U.S. from the Islamic Republic of Iran.

This approach is now being applied to the European Community, which has provided the Palestinian Authority with a $10 million monthly allowance since 1994.

Israel contends that, contrary to the terms of such transfers, PA Chairman Yasser Arafat allegedly diverts significant sums to support terrorist activity, a proposition the EU has long rejected on the basis that there is no proof.

In recent years, the Israeli military has seized scores of documents allegedly approving the transfer of munitions and money from the Palestinian Authority treasury to terrorist cells.

According to Darshan-Leitner, there is abundant evidence that Arafat personally has signed and written out instructions, listing by name the alleged terrorists to whom such stipends would go. One of his chief aides, Marwan Barghouti, since found guilty of terrorism by an Israeli court, signed many checks to alleged terrorists under his control, drawing from a PA bank account.

When presented with such evidence, EU Commissioner Chris Patten, former and final governor of Hong Kong, reportedly dismissed the Israeli delegation and evidence.

In response, Darshan-Leitner recently filed a claim against the European Union for pain and suffering and damages on behalf of Stephen Bloomberg.

On Aug. 2001, Bloomberg, his wife and then 14-year-old daughter were driving from Tel Aviv to their home.

The vehicle ahead of them slowed, so Bloomberg pulled out to pass, turning his family into target practice for the assailants in the slow car, who blasted the Bloombergs with 17 bullets. His wife, six months' pregnant, was killed. Bloomberg and his daughter are paralyzed from the waist down.

A British citizen, Bloomberg is suing the EU in a Tel Aviv court. In recent hearings, the EU lawyer argued that the organization has diplomatic immunity, and, thus, cannot be a party to the proceedings. The court has reserved judgment.

In the meantime, the question must be asked: If the EU has nothing to hide, then why take cover behind diplomatic immunity, Diplomatic immunity is intended to allow governments, acting within the scope of international law, to get on with their jobs and not be subject to unreasonable scrutiny. The alleged funding of terrorist organizations does not fall within this doctrine.

Chris Patten may soon find himself commiserating with his political counterparts in Iran.

Vivian Bercovici, a lawyer from Toronto, is the Candian Ambassador to Israel.

The U.N.’s Gaza Report Is Flawed and Dangerous

No: The Real Obstacle to Peace

Arafat's Personal Record
Should I Break Up, Get Engaged or Keep Dating?
Time Is Your Precious Commodity
A Constant World in Flux
Comments
MOST POPULAR IN Israel
Our privacy policy