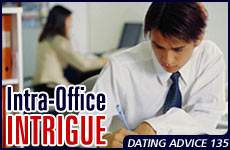 These co-workers are dating, but trying to keep it all a secret.

Two months ago, after two years of working together, my co-worker and I confessed our true feelings for each other, and we began dating for the purpose of marriage. Since we work together, we wanted to be careful not to bring attention to ourselves. This has caused more stress at work and an unstable courtship. We agreed to go about our day-to-day tasks as if nothing changed between us to avoid problems at work. On the other hand, he has issues with the way I interact with other employees. If I don't go to lunch with him one day but go with another co-worker, he gets angry. I make it clear to him that I have to do the same things I did prior to two months ago to avoid suspicion.

I tell him I get nervous when co-workers start asking me what is going on with us. They make comments about us spending a lot time together and my instinct is to throw everyone off by spending time with others.

I don't want to hurt him because it hurts me more when I see him get so upset over something I did. But no matter what I say, he claims I'm defending my actions instead of admitting that what I'm doing is just wrong. I don't know what do to or say to him anymore. He mopes for days. What do I do?

As you are now seeing, the biggest problem with dating a co-worker is the difficulty of establishing and maintaining boundaries at work while pursuing a courtship during personal time. Sometimes, a boundary can be imposed by the workplace itself, such as when it prohibits fraternization and/or marriage between co-workers. Most of the time, however, the boundaries between workplace and personal life are practical. An inter-office romance may create distractions that make it difficult for the parties involved to do their jobs properly, may make other co-workers uncomfortable, and may challenge the dynamics between employees.

In addition, it is ammunition for the gossip mill, and few people want to be the subject of their co-workers' gossip. Moreover, as much as two people may want a courtship to lead to marriage, they usually realize that if it does not, a break-up will be even more difficult if their co-workers "know" what is going on between them (not to mention the fact that if the breakup is particularly painful or messy, one of the former dating partners may want to change jobs, or may even be required to do so).

We have a few suggestions that can help the two of you minimize this stress and focus on continuing to develop your courtship. We suggest that you begin with a frank discussion about each of your expectations and goals, short-term as well as long-term. Since you are marriage-minded, we recommend that you talk about how you would like your courtship to progress so that you can reach this goal in a reasonable time, bearing in mind that because of your desire for privacy at work a long courtship may be unduly stressful. In our experience, when a couple focuses on building a relationship that can lead to marriage, they do not have to date for a prolonged period of time in order to know if they are right for each other.

Part of this discussion will involve acknowledging that the secrecy of your courtship can be frustrating, and deciding when and under what circumstances the two of you will tell co-workers about it. We also suggest that while your courtship remains a secret, you each describe how, under the circumstances, you would prefer to act toward each other and toward co-workers at work. Then reach an agreement that you both can live with. Since this is a difficult issue for the two of you, you will need to agree upon the parameters of your friendships with co-workers, especially those of the opposite gender. Where do you draw the line between the ordinary casual friendships between co-workers and a closer friendship that should be de-emphasized when you are building an emotional connection with a potential spouse?

As you talk about all of this, we hope that you acknowledge his concerns, such as his frustration with your going to lunch or socializing with other people at work, when you both have to keep some distance in order to maintain the illusion that you are not interested in each other.

Here's a good tool: When you talk about these issues, try to imagine how each of you would relate to your co-workers, and to each other, if your courtship were not a secret. You wouldn't spend every minute with each other, nor would you socialize only with each other. At the same time, you wouldn't pay undue attention to co-workers or confide in one of them about subjects you should share with your dating partner. Can't you apply these behaviors to your current situation?

Once you set boundaries, it is important to honor them, such as by not spending excessive time with co-workers, or unduly avoiding each other in order to avoid detection. This is one way to build the trust between you. If it means that at some point a co-worker discovers that the two of you are dating, that's a risk you will have to take. Discovery may be better than hurting the person you care about by engaging in maneuvers in order to avoid detection by others.

We know that it is hard enough to build an enduring relationship without the added stresses that the two of you are now experiencing. We hope you will discuss our suggestions soon, and that the solutions you work out will help you develop the communication and problem-solving skills that, if it all works out, will be of great benefit throughout a lifetime together.

Dating Maze #242 - Unproductive Patterns
How Instagram Brought Back This Nostalgic Soup
What Makes Eli Run?
The Tyranny of Materialism
Comments
MOST POPULAR IN Dating
Our privacy policy

How Instagram Brought Back This Nostalgic Soup
What Makes Eli Run?
The Tyranny of Materialism
Science Enters the Mysterious Inner World of Consciousness
BBQ Bourbon Cheese Kugel Recipe
Korach 5782: Visit to Lift the Spirit
That Time The Ivy League Found A Way To Limit Jewish Enrollment
Would You Rather Be Right or Happy?
Korach’s Unique Punishment
Who Was Josephus? The Controversial Backstory of the Famed Historian
1 2 3 … 2,888 Next »