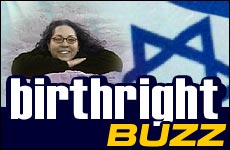 I was a proud Jew, but until I experienced the wonder of Israel, I had no idea what being Jewish meant.

For five years I had signed up for birthright Israel trips, then canceled due to fear. "Next year it will be safer," I thought, "next year the Israelis and Palestinians will find common ground ... next year."

And suddenly I was 26 and there was no more "next year." The trip is for 18- to 26-year-olds; I could never afford to go on my own or through my synagogue. I have worked full time since I was 18, going to school part time throughout.

So I filled out the form again. This time I was going, no matter what. And why? Because I was living up to all the Jewish stereotypes... it was a free trip.

I was raised Reform, went to Hebrew school three times a week, became a bat mitzvah and stayed to get confirmed. I was proud, but had no idea what being Jewish meant. To me it was arguing with professors at college when the High Holidays rolled around, explaining to proselytizers that I don't believe the messiah has come, being the underdog of religions, and running around on Passover between my parents' Seders.

Besides, my family is almost completely blended. My first cousins and half-brothers married non-Jews. Only one of four sets of the kids are being raised Jewish. My father is now married out as well. And my sister converted to Catholicism a few years ago.

After attending two Masses for siblings' weddings, I considered my commitment to Judaism. I try to celebrate the High Holidays and to keep Passover. But beyond that, what do I do? I moved back to Pikesville from Mount Vernon, got a job at the Jewish Times, went to yahrzeit services with my Mom ... and then continued my secular modern life. I go out on Shabbat, I eat treife, I have tattoos.

In eight days of speed-touring, I learned more about Jewish history than in 13 years of Hebrew school.

Then I went to Israel. I selected the Livnot U'lehibanot trip for the focus on nature and environment. A week later, an e-mail told me the trip was full; try again next season. So I went to the birthright Israel Web site. First on the list was Aish HaTorah, so I applied. I had never read about the group, and it turns out neither had most of the people on my trip.

The whole trip was filled with Jews more secular than observant, more cynical than optimistic. While ranging in age from 18 to 26, the gap disappeared instantly as we all experienced the wonder of Israel for the first time.

I am the first to mock anyone who would call any country a 'wonder,' but there is no other word to describe planting a tree in Israel with your own hands, setting foot upon Masada, standing by the waterfalls in Ein Gedi, floating in the Dead Sea covered in mud, sitting in Israel's independence hall and hearing the recording of "Hatikvah" being performed in 1948, touring Jerusalem's ancient Temple Mount tunnels, Shabbos at the Kotel, becoming lifelong friends with 39 "strangers," and so much more.

Everywhere we went, everyone was Jewish. There was no need to assimilate or blend, a skill I was once so proud of. If you said oy vey, no one would look at you funny. Everywhere, we found historical or religious significance. In eight days of speed-touring, I learned more about Jewish history than in 13 years of Hebrew school.

All of this is with great thanks to Aish HaTorah, Routes Tours, our guide Barry Goldfisher and his lovely family, our excellent guard Ran Farhi and our midrachim, Sarah Castelo, Emily Lerer and David Arenson.

I fell in love with this land, and these people. There is an unseeable force flowing throughout Jerusalem; the energy buzzes at all hours.

At night, when I couldn't sleep, knowing I was in this brand new country, the birthright of our people, I would sit on the hotel's patio and just listen. I found my answers there, about being Jewish and what it means to me: survival, love, respect, honor, courage, Torah, and God.

This article originally appeared in the Baltimore Jewish Times.

Still Crazy: Why We Made Aliyah
What Makes Eli Run?
The Tyranny of Materialism
Science Enters the Mysterious Inner World of Consciousness
Comments
MOST POPULAR IN Israel
Our privacy policy