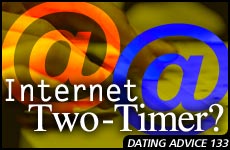 Something looks very suspicious. Should he break the engagement?

I am a 30-year-old Jewish male in a long-distance courtship. I was recently online and discovered that my fiancee has posted her profile on a Jewish personals site. I wanted to investigate, so I set up a false identity and emailed her, to which I received a reply with her phone number and times to call. This is someone who sometimes has no time to talk to me because she is so busy with school and work.

She has also cancelled trips to see me, and cancelled my visits to her. I always believed she was honest when she told me how busy she was. Now who knows what the real reasons are.

On the outside, the loving words she says make me believe she'll be a great wife. But this Internet thing seems like a bad dream, like a Jekyl and Hyde character. I am so hurt and trying hard not to take the blame on myself. I hope we can straighten things out, but my friends think I'm crazy and tell me to just end it all now.

Our question is, if you are engaged to be married, why were you browsing a singles' website? Were you simply curious? Maybe she was, too. Take a good look at your own motives before you decide to confront your fiancée.

There's a concept in Judaism called "dan l'chaf zechut" -- giving others the benefit of the doubt. There may be an honest and understandable reason why your fiancée answered your e-mail. Curiosity. An error in judgment. Second thoughts. (Second thoughts are normal, so don't hold them against her. Marriage is a big step and it is not unusual for a person to sometimes get cold feet during engagement. Having doubts is not a betrayal.)

Judaism does not expect us to turn a blind eye to something that looks suspicious.

On the other hand, Judaism does not expect us to turn a blind eye to something that looks suspicious. One possibility is that your fiancee is simply not ready for the commitment that marriage entails. If so, it is fortuitous that you discovered this now, rather than after the wedding!

Either way, you are right to ignore the advice of your friends, who probably have never been engaged themselves and don't realize that even engaged people sometimes do not-so-smart things. What you have to do is talk about this, face-to-face, with you approaching the subject in a non-confrontational way.

Before you do so, think about the reasons why you visited this website, and sort out your overall feelings about your fiancée and your upcoming marriage. You might want to read our book, "In The Beginning," to gain some insight into how to assess the quality of the relationship with the person you plan to marry, as well as the kinds of issues that can crop up during an engagement and how to best deal with them.

Once you clarify your own feelings, you can discuss them with your fiancée. You can explain why you browsed the site, and how you felt when you saw her listing. Explain why you contacted her and how you felt when you received a response. Before asking her the big, "Why," we suggest telling her you have done a lot of thinking about your relationship. Tell her all the positive qualities you see, and why you believe the two of you will have a good life together.

Before asking her the big, "Why," tell her the positive qualities you see.

Instead of asking her to immediately come up with an answer to the question, "Why," suggest that she do some thinking on her own. It may take some introspection for her to figure out why she posted her profile on the website and why she answered your inquiry. What is more important, however, is how she feels about the quality of your relationship and about your upcoming marriage. She's entitled to engage in the same thinking process that we've encouraged you to perform before the two of you talk and try to clear the air.

We recommend that you do this sooner, rather than later. Hopefully, by thinking your feelings through beforehand and following it with a sincere, face-to-face dialogue, you will both be honest and clear the air. In a positive sense, this incident can enable you to value each other and look forward to your upcoming marriage even more than you had in the past. Or, it could be that the two of you will realize that one (or both) of you is not ready to make a marriage commitment.

The engagement period can be an emotional minefield. We hope that you can take our advice and navigate it successfully with some deep thinking, followed by some deep conversation.

Dating Maze #224 - Mom's Ultimatum
In the Shadow of David and Goliath
Where Do the Laws of Nature Come From?
Saadiah Gaon, Rashi and Maimonides: How Three Rabbis Revolutionized Judaism
Comments